“Why the surprising lack of compassion?” Roberto A. Ferdman asks at Wonkblog. He’s discussing a Pew Research Center study on the “Politics of Financial Insecurity.” 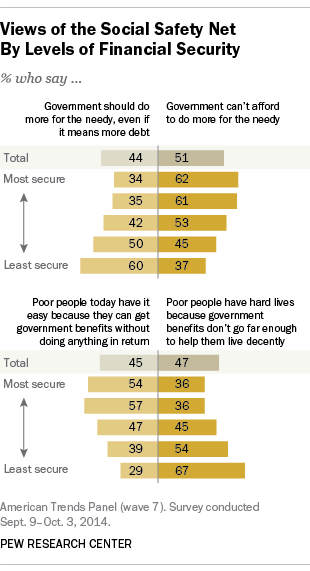 Specifically, Ferdman is discussing the findings shown in the graph to the right here, which shows that, as he summarizes: “Most of America’s richest think poor people have it easy in this country.”

Turns out a majority of those with the greatest wealth and financial security believe that the “poor have it easy because they can get government benefits without doing anything in return.”

Hence Ferdman’s question: “Why the surprising lack of compassion?”

But that’s not what’s surprising here. It’s not “surprising” that rich people would cling to such self-serving delusions. If the wealthy were capable of better than that, then the world would be a much better place.

The surprise comes from the startling gap between the opinions of a majority of the wealthiest Americans and any objective, accurate assessment of reality.

These people are dishonest, delusional and dumb. They reject the reality of the world as it is and have retreated into a fantasy world filled with happy, lazy paupers who “have it easy.”

The wealthy envy the poor. Or, at least, they claim that they do.

Ferdman is correct that this is, in part, a “lack of compassion.” But that’s not the first thing lacking here. Before we ask about the lack of compassion behind this bizarre claim from the wealthy, we need to ask some other questions first:

Why the lack of facts?

Why the lack of education?

Why the lack of intelligence?

Why the lack of curiosity?

Because this study from the Pew Research Center demonstrates that a majority of America’s wealthiest residents are appallingly lacking in all of those.

Or, to put it more directly, this study shows that a majority of the wealthiest Americans are ignorant, uneducated, stupid and dull. The wealthy are not simply hard-hearted. They’re thick-headed.

That seems odd, considering that many of these folks went to the very best schools.

But they’re lying, obviously. Nothing is stopping these wealthiest of the wealthy from ditching it all, giving away their wealth, and joining the poor in this paradise of poverty. Nothing is stopping them from embracing the carefree life of ease of those who “have it easy in this country.” But the wealthy never do that because, in truth, they really do know better. Beneath the shallow surface lies, they’re quite aware that the poor do not have it easy. This is just something they pretend to believe as a justification for injustice, for a lack of compassion, for their stingy opposition to every form of social safety net that would make life a bit less hard for the poor who even the callous rich recognize do not “have it easy in this country.”

So the wealthy didn’t start out as genuinely ignorant, dumb and dull. They started out just pretending that’s what they were.

And after decades of pretending to be stupid, it seems that a majority of the wealthiest Americans are no longer merely pretending.