Does this patriarchal construct of modesty make me look fat?

That first link there — via Christian Nightmares — is to an earnest, anguished post by a Christian blogger who says that God has been laying a heavy conviction on her heart about … leggings. She’s not coming at this from an anti-legging fashion perspective, a la GoFugYourself. She is, rather, convicted about leggings because of “modesty” — which is the white evangelical euphemism for the idea that women are primarily responsible for male lust. It’s the ideology that would rather put every woman in a burka than put any man in a blindfold — the ideology that blames women for everything from men’s lustful fantasies to men’s infidelity to men’s propensity for rape and violence.

A host of really smart women have been writing incisive, extensive critiques of this modesty ideology. Dianna E. Anderson and Samantha Field are particularly good at dissecting the white evangelical version of such modesty — diagnosing it, tracing its pernicious implications, and digging out its toxic roots. And they’re part of a whole community of women writing sharp, insightful commentary on the subject.

What struck me about the post above and this poor woman agonizing over the potential sin of legging-wearing was the way she had inadvertently framed the whole matter as a variation of a stock scene from 1990s sit-coms:

I went home later that day and shared the convictions I was having with my husband. Was it possible my wearing leggings could cause a man, other than my husband, to think lustfully about my body? I asked my husband his thoughts on the matter when he got home.

This is a spiritualized, evangelical-jargonized variation of the “Does this make me look fat?” dilemma that stand-up comics have been milking for laughs since before I was born. It’s a yes-or-no question for which neither yes nor no seems like a safe or adequate answer. She is asking him, “Yes or no — could seeing me in leggings cause a man to think lustful thoughts?” 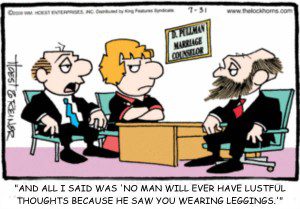 This is well-worn comic territory for a reason. This question, on its surface, suggests a wide array of possible answers that could come across as disastrously insulting. Your kinder variety sit-com husbands (Ray Romano, Ricky Ricardo) will wind up saying something unintentionally awful while your nastier variety sit-com husbands (Al Bundy, Ralph Kramden) will seize the chance to say something deliberately cruel.

But both questions — either “Does this make me look fat?” or “Is it possible my wearing leggings could cause a man … to think lustfully?” — are provocative mainly because there seems to be so much going on beneath the surface. The real peril of such questions comes from trying to answer them at face-value while avoiding the multitude of assumptions, fears and falsehoods that they hint at — whether that be the toxic business of fat-shaming or the evil patriarchal construct of “modesty” ideology.

But look at the question again. Look at what it’s really asking and at the underlying assumptions. It is a question about cause — about agency, control and responsibility: “Is it possible my wearing leggings could cause a man … to think lustfully?”

The objective answer to that question is No. No, she does not control what choices others make. No, she cannot cause or compel others to act by wearing or not wearing any given article of clothing. No, she is not responsible for the thoughts of others. And, no, those others cannot pretend that she or anyone other than themselves is responsible for their own thoughts, choices and actions.

But the husband here didn’t answer “No.” He answered her yes-or-no question with a firm “Yes” — yes, you could cause men to think lustfully. But he manages to say “yes” in a way that seems even more insulting than saying “no” would have seemed. He says this:

I appreciated his honesty when he told me, “yeah, when I walk into a place and there are women wearing yoga pants everywhere, it’s hard to not look. I don’t, but it’s not easy.”

That seems perilously close to him saying, “I suppose it’s possible other men might find you attractive because, after all, I find lots of other women attractive. …” He seems to have just informed his wife that he doesn’t find fidelity “easy.”

She doesn’t appear to recoil from this as though he’d said something cruel, but didn’t he? Maybe I’m wrong to see an undercurrent of pain and sadness beneath all the pious talk here of “modesty.”

But there’s something else that I find maddening about all such white evangelical discussions of “modesty of dress,” which is how far removed they seem to be from what Jesus (or Amos) had to say about this subject.

For white American evangelicals, religion is always about sex — about other people’s genitals, but when Jesus spoke about modesty of dress it was never about sex and lust. It was about money and greed and self-indulgence at the expense of those in need. And he tended to focus on men more than on women. Jesus chided “Solomon in all his glory” for worrying about fancy clothes. When he told a story about a man who “dressed in purple and fine linen” you knew that the story wasn’t going to end well for that selfish, immodest character.

This is what Jesus said about “modesty”:

Why do you worry about clothing? Consider the lilies of the field, how they grow; they neither toil nor spin, yet I tell you, even Solomon in all his glory was not clothed like one of these. But if God so clothes the grass of the field, which is alive today and tomorrow is thrown into the oven, will he not much more clothe you — you of little faith? Therefore do not worry, saying, “What will we eat?” or “What will we drink?” or “What will we wear?” For it is the Gentiles who strive for all these things; and indeed your heavenly Father knows that you need all these things. But strive first for the kingdom of God and God’s justice, and all these things will be given to you as well.

And here is what his cousin had to say about it: “Whoever has two coats must share with anyone who has none; and whoever has food must do likewise.”

If you’re striving for “biblical modesty,” that is the core and the whole of what the Bible itself has to say about leggings and yoga pants: “Whoever has two pair of leggings must share with anyone who has none; and whoever has food must do likewise.”

January 19, 2015 Rule No. 1 and Amendment No. 1: One shouldn't say cannot when one can only say should not
Recent Comments
0 | Leave a Comment
Browse Our Archives
Related posts from slacktivist