Maybe the Apostle Paul was just a lousy writer

For the past few days, every time I’ve looked at the front page of this blog I’ve seen that picture of Leviticus 19:28 Tattoo Guy (from this post). And so I’ve been thinking again about the patchwork, fudgy, incoherent way that 21st century Gentile Christians here in America tend to think of the laws and commandments of what we call the “Old Testament.”

That verse from Leviticus is a good example of an unambiguous prohibition that we no longer treat as prohibitive. “You shall not make any gashes in your flesh for the dead or tattoo any marks upon you.” It reminds me of some old friends from Jesus People USA. The folks at JPUSA weren’t shy about quoting from Leviticus to reinforce their “biblical” rejection of all same-sex relationships, but they were never worried that their tattoos were “unbiblical” due to Leviticus 19:28. 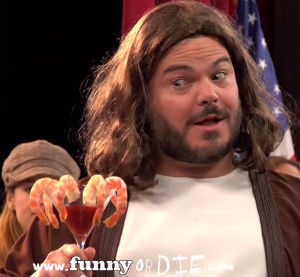 The more “mainstream” white evangelicals who attended JPUSA’s Cornerstone music festival were sometimes a bit startled to see the impressive ink adorning these somewhat-freakier brothers and sisters in Christ, but I don’t ever recall hearing anyone mention that biblical commandment as an objection. And, of course, by the final years of that festival, tattoos had become much more common even within the mainstream white evangelical subculture.

So why do some biblical commandments still count while others seem to be completely discounted? Ask most American evangelicals that question and they’ll hem and haw and start mumbling some half-baked business about “ceremonial law” or about whether or not the Old Testament passage is reaffirmed in the New Testament. They tend to be fairly confident that some answer to that question must surely exist, somewhere, but they won’t be able to articulate a clear answer.

That’s a bit odd, because this question is hugely present and hugely important throughout much of the New Testament. The epistles of Romans and Galatians are, largely, extended attempts to answer this question. Paul explained his understanding of all of this in those books as clearly and forcefully as he could.

Here in the 21st century, these Bible-reading, Bible-believing, Bible-revering Christians have probably read both of those books. They can likely recite multiple verses from both Romans and Galatians from memory.

Yet if you ask a 21st-century American Christian if getting a tattoo is a sin, it’s far less likely that they will respond by citing Paul’s argument in Romans or Galatians and far more likely they’ll respond by babbling about “ceremonial laws” or some other contemporary concoction that would’ve left Paul bewildered to hear of it.

Maybe the Apostle Paul was just a lousy writer.

February 9, 2015
Dare to be stupid: Bigotry means choosing to limit your mental capacity
Next Post

8/9 Flashback: I hope
From August 9, 2007, "The sin of despair" I suppose I should...
view all Progressive Christian blogs
What Are Your Thoughts?leave a comment
Copyright 2008-2021, Patheos. All rights reserved.
Close Ad