The unicorns of the King James Bible

Rachel Ford discusses an Answers in Genesis post on “Unicorns in the Bible?”

I especially like this bit from Ford: “As a kid, I really liked that the KJV mentioned unicorns, because I liked unicorns. When my Mom pointed out that this was probably a mistranslation, I entertained the hope that it was not.”

I remember thinking exactly that when I first came across those biblical unicorns as a kid. I remember the same excitement and the same disenchantment on realizing that the King James Version’s “unicorn” probably had nothing to do with unicorn unicorns.

Here, for the record, are all of the unicorn mentions in your King James Bible:

• Numbers 24:8 — “God brought him forth out of Egypt; he hath as it were the strength of an unicorn: he shall eat up the nations his enemies, and shall break their bones, and pierce them through with his arrows.” 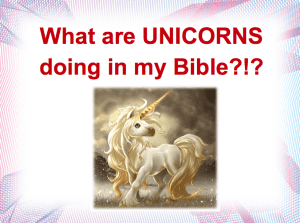 • Job 39:9-10 — “Will the unicorn be willing to serve thee, or abide by thy crib? Canst thou bind the unicorn with his band in the furrow? or will he harrow the valleys after thee?”

• Psalm 29:6 — “He maketh them also to skip like a calf; Lebanon and Sirion like a young unicorn.”

• Psalm 92:10 — “But my horn shalt thou exalt like the horn of an unicorn: I shall be anointed with fresh oil.”

• Isaiah 34:7 — “And the unicorns shall come down with them, and the bullocks with the bulls; and their land shall be soaked with blood, and their dust made fat with fatness.”

The full passage in Isaiah 34 is pretty terrific if you’re looking for fantastical creatures in the Bible — it also gives us “an habitation of dragons” and satyrs and Lilith (who is, in the KJV, disappointingly translated into a screech owl).

Most of those “unicorn” verses could kinda sorta apply if they were about the mythical creatures we imagine when we use the word “unicorn” today — the beautiful one-horned horses of Peter S. Beagle novels, air-brushed T-shirts and groovy custom vans. But there’s nothing quite specifically unicorn-ish about any of those verses either, which I found disappointing as a kid who had read both the King James Bible and The Last Battle several times over.

Incidentally, the Geneva Bible of 1599 had one additional unicorn verse, Deuteronomy 14:5, which reads in that translation: “The hart, and the roebuck, and the bugle, and the wild goat, and the unicorn, and the wild ox, and the Chamois.” That’s part of a longer list there of animals that Mosaic law proclaimed clean and permissible to eat.

So that verse in that translation seems really disturbing if you think of its “unicorn” as our unicorn. It’s also a big hint that the translators working on these early English versions of the Bible didn’t have the same set of connotations in mind that we do when they seized on that word “unicorn.” (In any case, it is not permissible to eat unicorns, no matter what the Geneva Bible may say about it.)

You won’t find the English word “unicorn” in any more recent English translation of the Bible. Those translations all offer different suggestions — most settling on something like “wild ox.” Bible Gateway has a neat feature that lets us look at multiple translations of a single verse. Almost all English translations of Job 39:9 say “wild ox,” but John Nelson Darby’s (yes, that Darby) 1890 translation uses “buffalo,” as does Eugene Peterson’s The Message. The 1899 Duoay-Rheims Bible uses the word “rhinoceros.”

Yet while the KJV’s use of the word “unicorn” wasn’t the best translation, it also wasn’t quite what we might think of as “mistranslation.” The Hebrew word the KJV renders as unicorn is re’em, and back in 1611, nobody really knew what that word meant. For the translators in 1611, re’em referred to some vaguely imagined mysterious wild creature. And for them “unicorn” also referred to some vaguely imagined mysterious wild creature. So for them, at the time, it was a reasonable suggestion. It was a legitimate bit of guesswork on their part.

Today, we’re still not really sure what that word re’em means or meant. For a bunch of reasons, “wild ox” now seems like a better guess — but we’re still, on some level, guessing as to what kind of animal, specifically, that word was originally intended to refer.

To her credit, Elizabeth Mitchell acknowledges this in her “Unicorns in the Bible?” post for Answers in Genesis. But she has to tread very carefully. Mitchell is writing for an audience that: A) Likely holds to a KJV-only stance that distrusts other English translations; B) dislikes being reminded that the Bible wasn’t originally written in English, seeing that as a slippery slope to biblical criticism and, therefore, nihilism; and C) is hostile to any discussion of natural history or speciation that allows for more than 6,000 years of life on Earth.

For her part, Mitchell more or less agrees with the re’em as wild ox guess. She also cautiously suggests that they may have been aurochs — which is a bit reckless when writing for AIG, since it might cause readers to Google aurochs and wind up staring at the paintings in Chauvet Cave. AIG works hard to inoculate its adherents against radiocarbon dating, training them to believe it is unreliable because homminahomminahommina mumblemumble. But they still don’t want their followers marveling at 30,000-year-old cave paintings, lest they begin to ask questions.

Anyway, for a lively, accessible discussion of these King James unicorns, let me again recommend the fine Sunday school lesson put together by biblical scholar Darrell Pursifull: “Translational Monsters: Fantastic Biblical Beasts and Where to Find Them.” It is, unfortunately, in PowerPoint, but it’s a great introduction not just to how unicorns and satyrs and dragons got into the KJV, but also more broadly how to read the Bible in English, which is to say how to read it in translation.

February 12, 2015 Republicans saying Republican things (2.12)
Recent Comments
0 | Leave a Comment
"*nods* It's difficult to wrap my head around the kind of lying Trump does, where ..."
Jim Roberts 12/7 Flashback: The base
"Mildly interesting: When my computer read out loud the article on Dr Oz in an ..."
Magpie Postcards from the class & culture ..."
"Well, my brain went down a rabbit hole and a half...Remember that Cthulhutech campaign I've ..."
Daniel McLellan Perspective
"I mean to be fair, there are some days that if I could do that ..."
Lsamaknight Postcards from the class & culture ..."
Browse Our Archives
Related posts from slacktivist