When I first read this scene in Left Behind, what most struck me was the authors’ heavy-handed attempt to establish the moral code of their post-Rapture world. That code is just as important for these books as it is in any slasher movie. It gives shape to all the mayhem, violence, death and suffering of their “Great Tribulation” by reassuring the audience that everyone who suffers and dies deserves to suffer and die.

Establishing that code and its rules is the authors’ main focus in this scene. Co-pilot Christopher is about to die a horrible death, and Tim LaHaye and Jerry Jenkins want to make sure readers understand that he deserves it.

That’s what I focused on in the discussion below — originally posted on April 6, 2004.

Over time, though, as I read further in Left Behind and the rest of the series, I came to view this as perhaps the key scene in the entire series. Rayford Steele chews out his co-pilot while working himself up into a state of high dudgeon. Then, full of a sense of his own moral superiority, he strides across the tarmac back toward the terminal.

“All around were ambulances and other emergency vehicles trying to get to ugly wreckage scenes,” LaHaye and Jenkins tell us. Yet Rayford ignores them all. He walks through and past all of that ugly wreckage, ignoring the suffering of those around him, and all the while congratulates himself for being the kind of heroic, upright, morally superior man who would always be “first to volunteer for emergency duty.” That’s how he describes himself to Hattie while he literally steps around dying, suffering people in desperate need of emergency attention.

That is the central theme of these books and the lesson they teach readers in every chapter. That is a snapshot of the theology, morality and politics of Left Behind.

Rayford, Christopher and Hattie were the last three off the 747.

Christopher, you may remember, was Rayford’s first officer on the flight. Up until now he’s played little part in the story beyond handling the controls while Rayford talked to Hattie and wandered the plane. But we’re about to learn that Christopher Smith is a villain — at least according to the code of Left Behind — and therefore he is doomed.

… The bus driver insisted that the crew ride with him and the last passengers, but Rayford refused. “I can’t see passing my own passengers as they walk to the terminal,” he said. “How would that look?”

Christopher said, “Suit yourself, Cap. You mind if I take him up on his offer?”

Rayford glared at him. “You’re serious?”

“I don’t get paid enough for this.”

“Like this was the airline’s fault. Chris, you don’t mean it.”

“The heck I don’t. By the time you get up there, you’ll wish you’d ridden too.”

“I should write you up for this.”

“Millions of people disappear into thin air and I should worry about getting written up for riding instead of walking? Later, Steele.”

It’s not clear why Rayford would be able to “write up” Smith for accepting the airline’s preference that its crew ride back to the terminal. “It was a long walk,” we later read, “and several times they waved off rides.” 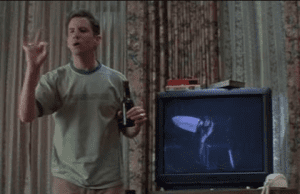 Smith seems to be doing nothing more than following the moral code clearly outlined by Buck Williams in the previous chapter: “It’s OK in a situation like this to think of yourself a little. That’s what I’m doing.”

But Smith here violates the strange code of chivalry that governs ethics in Left Behind. Even worse, he flouts the authority of Rayford Steele — and therefore of Tim LaHaye himself. No character can do that and live.

L.B. has its own moral rules that function like the rules for slasher flicks that Jamie Kennedy’s character outlines in Scream. By violating those rules, Smith dooms himself as surely as that teenager who says, “Don’t believe those crazy stories. Let’s sneak off into the woods and have sex.”

Rayford shook his head and turned to Hattie. “Maybe I’ll see you up there. If you can get out of the terminal, don’t wait for me.”

“Are you kidding? If you’re walking, I’m walking.”

“After that dressing-down you just gave Smith? I’m walking.”

“He’s first officer. We ought to be the last off the ship and first to volunteer for emergency duty.”

As they walk back, LaHaye and Jenkins tell us, “All around were ambulances and other emergency vehicles trying to get to ugly wreckage scenes.” Steele is, in other words, having to thread his way through people who were actually doing “emergency duty.” He does so, successfully, without volunteering in even a single case. The moral code of L.B. does not have anything to do with helping people in need.

“Well, do me a favor and consider me part of your crew, too,” she tells Steele. “Just because I can’t fly the thing doesn’t mean I don’t feel some ownership. And don’t treat me like a little woman.”

Just as it was a violation of the code for Smith to ride while little women walked, so too it is a violation for Hattie to act like a man by refusing the ride. She’s doomed too.

March 5, 2015
Shoveling snow and drying off the dog
Next Post

March 7, 2015 No time to wallow in the mire
Recent Comments
0 | Leave a Comment
"Regarding Link #4: I have never understood the form of patriotism that's based on the ..."
Professor Rudolf Laschenkohl Postcards from the class & culture ..."
"Reading "God's Little Acre" by Erskine Caldwell (officially declared not onropgraphy in 1933 but I ..."
SKJAM! Postcards from the class & culture ..."
"Traditional Conservatives have always been against things like compulsory I.d. cards, which is what this ..."
Iain Lovejoy Pretty sure I heard this one ..."
"Various news sources are reporting that an independent review has concluded that the COVID-19 pandemic ..."
stewart Postcards from the class & culture ..."
Browse Our Archives
get the latest from
slacktivist
Sign up for our newsletter
POPULAR AT PATHEOS Progressive Christian
1