Left Behind Classic Fridays, No. 28: ‘Shackled’

Here is the final of the “dozens of stories” Rayford Steele sees CNN report on the aftermath of the Rapture:

At a Christian high school soccer game at a missionary headquarters in Indonesia, most of the spectators and all but one of the players disappeared in the middle of play, leaving their shoes and uniforms on the ground. The CNN reporter announced that, in his remorse, the surviving player took his own life.

In the Jersey Christian Athletic Conference we traveled pretty far for games — bus rides down to Trenton or up to Hackensack, Parsippany, Manhattan and Huntington, Long Island. This makes me wonder who it was that the MKs at this Christian school in Indonesia were playing against. Both teams are raptured, so both seem to have been composed of believers. Was this a game of American missionary students versus indigenous Indonesian Christian students? If so, why are the American students segregated from their brothers and sisters in Christ? 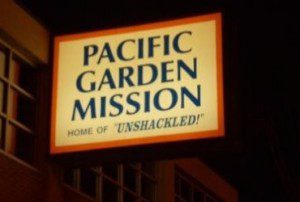 Anyway, that’s just a quibble. My main point here is that this anecdote may be the ultimate example of the inverted gospel — and inverted evangelicalism — of Left Behind.

This story is the anti-Unshackled.

Unshackled is an old-time radio melodrama, recorded in front of a live audience. Since 1950, the Pacific Garden Mission in Chicago has produced this program, which is broadcast on stations all over the world.

You may have stumbled across it late one night when driving across one of those vast radio wastelands where you press the seek button on the AM dial and watch the numbers cycle through without picking up a signal. Suddenly, you crest a hill or the ionosphere shifts and you hear a swelling, lugubrious organ, the sound of footsteps, a door opening and the clink of ice in a glass. It’s all terribly campy, but it’s also fairly well done — the actors and foley artists know what they’re doing. The story is sheer melodrama and the organ accompaniment is overdone, yet it’s also strangely soulful.

The Pacific Garden Mission is descended from the ministry of Dwight L. Moody. Like Moody himself, Unshackled combines all the show-business acumen of a televangelist with the earnest sincerity of an earlier age. The program is a soap opera for Jesus. Every story follows pretty much the same arc. A soul in despair — without hope, without faith — finds redemption and a reason to live in the mercy of a God who is dying to offer us another chance. It’s both “the old, old story” of the gospel hymn and the old story of “the man in a hole” (a man falls into a hole, he gets out again). And thus, despite its overdose of schmaltz, it’s strangely appealing.

Contrast this archetypal Unshackled story with the story of L&J’s left behind left back stranded on an Indonesian soccer field. Here is a young man without faith, without hope. He is convinced the world is meaningless — there is no God, death is absolute, life is absurd and love is a delusion.

Then the fateful day arrives. In the twinkling of an eye, his teammates and opponents vanish. He is confronted with stark, incontrovertible proof of the existence of God. Life, he realizes, does have meaning — there is a basis for faith, hope and love. And so he kills himself.

Left Behind and Unshackled are telling opposite stories about opposite Gods. Pacific Garden is a rescue mission. The “Tribulation Force” is not.