What’s the deal with this ‘Sunday WTF’?

Aric Clark of Two Friars and a Fool recently wrote about “What the Bible Is NOT.” He starts with this:

For most Christians in most places throughout most of the history of the faith, that’s a simple, obvious and orthodox statement. (The last bit is more or less a paraphrase of Augustine.) 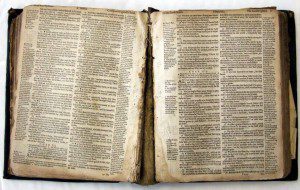 For Christians here in the U.S., in the last couple centuries, though, that’s a frightening, radical claim. For white evangelicals in America, those are fightin‘ words. “The B-I-B-L-E,” we’re taught to sing. “Yes that’s the book for me. I stand alone on the Word of God, the B-I-B-L-E.”

That’s a strange development. Just look at that word “Christian.” It suggests a faith based and centered on Jesus Christ. When Jesus gets replaced by the Bible, shouldn’t that word be changed to reflect that?

It’s also a strange development given that his statement — “The Bible is not the Word of God. Jesus is the Word of God.” — is biblical, while the now-fashionable innovation of switching that around isn’t. “In the beginning was the Word,” the Bible says, “and the Word was with God, and the Word was God.” And it’s just kind of weird to wind up contradicting the Bible under the guise of elevating it.

The Bible is not a self-help book. While it contains a lot of advice about life it isn’t primarily a book designed to help people live well or be healthy. Plenty of the advice is terrible, like when it’s acceptable to sell your daughter into slavery. Some of the advice only works in certain contexts and the vast majority of it is not aimed at individuals, but at communities.

The Bible is not written to you. The authors had no idea you would ever exist, couldn’t have imagined your culture or your particular life experience, and did not put that one verse in there 2000+ years ago just so you would find it now. This doesn’t mean you can’t get meaning from the Bible but just recognize it isn’t your personal devotional.

This is something I tried to write about recently in a post called “The Bible wasn’t written to provide source material for inspirational posters.”

It’s also what I’ve been trying to address in the weekly “Sunday WTF?” series. That started out years ago here as a series called “Sunday favorites,” in which I would post, without comment, biblical passages and stories that I find inspiring, or challenging, or thought-provoking, or surprising, or otherwise commendable and recommendable.

But I gradually came to worry that highlighting such passages could reinforce the kind of misreading, mistreatment and misappropriation of the Bible that Aric Clark writes about above — the evangelical lens that treats the Bible as a self-help book and our personal devotional. I worried that this could feed into the modern approach that treats the entire Bible as a collection of proverbs. (Even that is misleading, really, since this evangelical lens doesn’t even allow us to read Proverbs as a collection of proverbs.)

So this year I’ve switched gears with that feature, highlighting instead biblical passages that I hope will help to remind us that the actual Bible itself is a far stranger, older and wilder collection of books than this personal devotional approach that elevates the letter of the text above the person of Jesus. I’ve started focusing on passages that are bewildering, disturbing, or disgusting — passages that force us to recognize that this is an incomprehensibly ancient collection of texts, some of which are inscrutable, opaque and offensive.

And there’s no shortage of such stuff there in the Bible. It’s full of passages that should make us all pause, step back, and ask “WTF?”

I’m sure that some people will perceive my focus on these passages as an “attack” on the Bible. But I’m not attacking it, I’m just quoting it — accurately. Those who wish to “defend” the Bible from being quoted accurately need to recognize that it cannot be the Bible itself that they’re defending.

The “Sunday WTF?” feature doesn’t attempt to contend with the passages I’m quoting, but I’m hoping that it demonstrates that such passages need to be contended with.

The idea that we have to contend with the Bible horrifies and frightens many within white evangelicalism. It goes against the main thrust of their argument, which says that the Bible judges us. We must never presume to contend with the Bible, they say. We are in no position to do so. We are fallen, wretched sinners and the Bible is the only thing that can save us — the only external, objective authority that can teach us right from wrong.

But again, as Aric Clark reminds us, this is not what Christianity has usually claimed. Jesus is supposed to be our savior, not the Bible. And the evangelical claim that the Bible serves as an external, objective authority to teach us right from wrong seems to reduce the scriptures to something like the forbidden fruit in the Garden of Eden.

And, again, look at that word “Christianity.” As that name suggests, we’re not supposed to be looking for some external objective authority. We’re supposed to be following a subject — a person, not worshipping an object.

The idea that the scriptures are something that the faithful must sometimes contend with is as old as the scriptures themselves — which is to say that it is older even than Christianity. Judaism offers a very long history of the faithful contending with and contending against scripture. And much of that contentious history is recorded and reflected in the scriptures themselves. It’s modeled there by Abraham, Jacob, Moses, Job, David, Qoheleth, Peter and Paul, among others. And by Jesus “But I Say to You” Christ himself.

The mistake of replacing Jesus with the Bible as the “Word of God” — the mistake of pretending the Bible provides us with an accessible, external objective authority — has caused us to forget how to contend with the Bible. So instead of contending with these many, many WTF? passages, we’ve taught ourselves to ignore them. We’ve come to pretend they’re not there.

April 14, 2015 I see you darkly through a glass again
Recent Comments
0 | Leave a Comment
Browse Our Archives
Follow Us!

The Peripatetic Preacher Reading in the Shallow and...
I used to get paid to read books, or at least that...
view all Progressive Christian blogs
What Are Your Thoughts?leave a comment
Copyright 2008-2020, Patheos. All rights reserved.