First contact and ‘the great disillusionment’ May 19, 2015 Fred Clark

The opening paragraph of H.G. Wells’ The War of the Worlds is a creepy masterpiece:

No one would have believed in the last years of the nineteenth century that this world was being watched keenly and closely by intelligences greater than man’s and yet as mortal as his own; that as men busied themselves about their various concerns they were scrutinised and studied, perhaps almost as narrowly as a man with a microscope might scrutinise the transient creatures that swarm and multiply in a drop of water. With infinite complacency men went to and fro over this globe about their little affairs, serene in their assurance of their empire over matter. It is possible that the infusoria under the microscope do the same. No one gave a thought to the older worlds of space as sources of human danger, or thought of them only to dismiss the idea of life upon them as impossible or improbable. It is curious to recall some of the mental habits of those departed days. At most terrestrial men fancied there might be other men upon Mars, perhaps inferior to themselves and ready to welcome a missionary enterprise. Yet across the gulf of space, minds that are to our minds as ours are to those of the beasts that perish, intellects vast and cool and unsympathetic, regarded this earth with envious eyes, and slowly and surely drew their plans against us. And early in the twentieth century came the great disillusionment.

That’s a terrific bit of foreshadowing — setting up both the plot and the major theme of Wells’ story. But it’s undercut, a bit, by the epigraph Wells placed just ahead of it in his 1897 novel — a snippet from something the great astronomer Johannes Kepler said early in the 17th century:

“But who shall dwell in these Worlds if they be inhabited? … Are we or they Lords of the World? … And how are all things made for man?”

Rather than supporting Wells’ somewhat arrogant dismissal of humanity’s arrogant incuriosity — “No one would have believed …” and “No one gave a thought …” — those lines from Kepler actually show that humans had been speculating and pondering and wondering about this very subject for centuries before. The quote is taken from Robert Burton’s 1621 tome, The Anatomy of Melancholy, and a larger excerpt from Burton’s passage shows that this speculation long preceded Kepler:

If our world be small in respect, why may we not suppose a plurality of worlds, those infinite stars visible in the firmament to be so many suns, with particular fixed centres; to have likewise their subordinate planets, as the sun hath his dancing still round him? which Cardinal Cusanus, Walkarinus, Brunus, and some others have held, and some still maintain. ...

Though they seem close to us, they are infinitely distant, and so per consequens, there are infinite habitable worlds: what hinders? Why should not an infinite cause (as God is) produce infinite effects? … Kepler (I confess) will by no means admit of Brunus’s infinite worlds, or that the fixed stars should be so many suns, with their compassing planets, yet the said Kepler between jest and earnest in his perspectives … seems in part to agree with this, and partly to contradict; for the planets, he yields them to be inhabited, he doubts of the stars; and so doth Tycho in his astronomical epistles, out of a consideration of their vastity and greatness, break out into some such like speeches, that he will never believe those great and huge bodies were made to no other use than this that we perceive, to illuminate the earth, a point insensible in respect of the whole. But who shall dwell in these vast bodies, earths, worlds, if they be inhabited? rational creatures? as Kepler demands, or have they souls to be saved? or do they inhabit a better part of the world than we do? Are we or they lords of the world? And how are all things made for man?

We humans from earth have been looking up at the stars and thinking about this for a very long time. We have been pondering the possibility of intelligent extraterrestrial life since long before H.G. Wells. And we’ve certainly continued to ponder it since then — in stories, novels, movies, scientific papers and theological treatises.

The best of this speculation — whether in stories or in more scholarly non-fiction — builds on this long tradition. Thus when Carl Sagan had Ellie Arroway and her father say, “If it’s just us, seems like an awful waste of space,” he was borrowing from the Danish astronomer Tycho Brahe (1541-1601) who argued, in Burton’s paraphrase, “that he will never believe those great and huge bodies were made to no other use than this that we perceive, to illuminate the earth, a point insensible in respect of the whole.”

That’s why I’m mostly just kind of meh about this Damon Linker piece and the other (semi-)recent posts James McGrath rounds up on the subject. Linker hits on several of the “challenges … to the world’s religious traditions” that first contact with intelligent extraterrestrial life would introduce, but he misses the biggest one — the one explored by both Kepler and Wells. Kepler acknowledges the kind of questions Linker raises — “have they souls to be saved?” But then he quickly skips ahead to the more potentially devastating question: “Are all things made for man?”

If we are alone, then we have top-billing in the universe and we’re the stars of the show. Religious thinkers have repeatedly warned us not to think of ourselves in this way — ever since before the first time the story of Job was performed. But we can’t seem to help it. First contact would force us to recognize that ours is not the only story — that we humans from earth may be, “Not Prince Hamlet … but an attendant lord … almost, at times, the Fool.” Or that we may be more akin to “the infusoria under” someone else’s microscope.

Such a “great disillusionment” might prove to be fatally humiliating or it might prove to be humbling in a more edifying way. (The hum- component of those words is shared with the words human and humus. Like our theology and our philosophy, our language is grounded in earthy, terrestrial concepts.) In such a humbled state, the particularity and parochial, terrestrial contingency of our religious traditions will be an asset, not a liability. It will be a resource for remembering and expanding on the lesson that some of us were fortunate enough to learn early on from Mr. Rogers — that we are unique and special and loved, but so is everyone else.

As for the changes in dogma and doctrine that would (will?) accompany first contact, those will also be significant — forcing us to rethink many things we assumed we knew with certainty. If Klaatu or some Vulcan ambassador lands a starship on the National Mall then it will turn out that, oops, we were wrong about the impossibility of faster-than-light travel. That won’t mean that everything we thought we knew about the speed of light or about physics has to be completely scrapped as useless nonsense, but that we will have the chance to learn there is more to the story than what we thought we knew.

Such a possibility seems to me less like a great disillusionment than an enormously exciting opportunity. 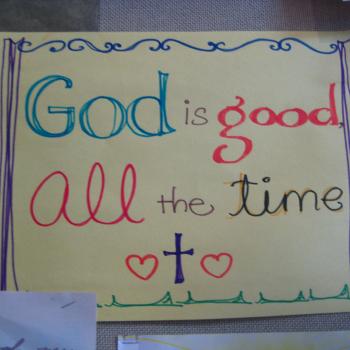