The ‘CharlieCharlieChallenge’ doesn’t lead to demonic possession — but it can nurture credulity and willful ignorance, which is worse

May 29, 2015 by Fred Clark
0 Comments
The ‘CharlieCharlieChallenge’ doesn’t lead to demonic possession — but it can nurture credulity and willful ignorance, which is worse May 29, 2015 Fred Clark

Anybody remember James Hydrick? He was a “psychic” who claimed to have telekinetic powers. Hydrick demonstrated this ability on the TV show What’s My Line? in 1980 in a bid to claim the $10,000 check that magician Amazing Randi has (for decades) offered to anyone who can prove such psychic ability. After Hydrick moved a pencil and turned the pages of a phonebook, Randi duplicated the pencil trick by blowing on it, then debunked the phonebook stunt by sprinkling bits of styrofoam around the book, thus preventing Hydrick from blowing on the pages.

Happily, the whole thing has been posted on YouTube. Here’s James Hydrick’s debacle and one of many such triumphs for James Randi:

Apparently, Hydrick’s pencil-moving shtick has been tweaked and updated as something called the “CharlieCharlieChallenge.” In this version of the trick, the person doesn’t deliberately blow on the pencil, but is supposed to believe it moves due to the intervention of a “Mexican demon” named Charlie. (What? “Charlie the Mexican demon”? Better storytelling, please.) 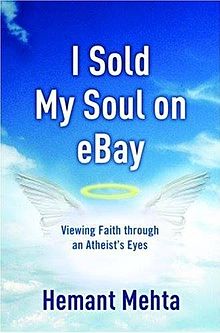 So yeah, it’s pretty dumb. Even dumber, though, is the overwrought reaction of some earnestly fearful clergy, who are condemning the dumb game as though it really somehow invoked the presence of an actual pencil-pushing Mexican demon. As Hemant Mehta says, “These are the same kind of people who think playing Dungeons & Dragons is wicked and ‘Light as a feather, stiff as a board’ is a real magical spell.” Yes. And also the same kind of people who worry that saying “Expecto Patronum” is a sin because you’re casting a “real” magic spell. (That’s silly because there’s no such thing as “real” magic spells — at least, not for us wand-less Muggles.)

Hemant quotes several such overwrought — and wildly heterodox — warnings from various religious figures and writers, including this from Simcha Fisher writing for the National Catholic Register:

Listen up, folks. It doesn’t matter who made up this game, how, or why. Only a fool would play it, and you should make sure your kids know this. …

I was chatting with my husband about how these things are forbidden even if we don’t really believe they will work, and he pointed out that the devil may actually prefer it when people sell their souls lightly. “That’s what the devil wants, even more than satanists,” he said: “Dummies selling their souls as a joke.”

Oy. No. Sorry, but Robert Johnson folklore is not actually orthodox Christian theology. Even if you play the CharlieCharlieChallenge at midnight at a Delta crossroad and sign a contract in blood, you can’t actually sell your soul to the devil — or to anyone else. That’s not an actual thing. It’s a vivid metaphor that makes for some great legends and classic literature, but that’s all — just a metaphor (even for Dick Cheney).

Fisher quotes from the Catholic catechism’s condemnation of “all forms of divination,”* but its argument there is based on the idea that these are forms of idolatry — of turning away from God toward false gods or false promises of godlike power and knowledge. It’s logic is that of Deuteronomy, mocking “gods made by human hands, objects of wood and stone that neither see, nor hear, nor eat, nor smell.” The warning is not — as Fisher seems to think — to avoid turning to other wicked, dangerous, real gods.

I agree with Simcha Fisher that the CharlieCharlie game is foolish, but not because it invites demonic possession. It’s foolish because it’s foolish — because it invites credulity, willful ignorance and irrational thinking. That sort of thing doesn’t put you in danger of dark supernatural forces, but it does put you in danger of swallowing ever more ridiculous notions and, before you know it, you may end up handing over your hard-earned money to fortune-tellers and astrologers or playing the lottery. Your capacity for rational thinking may eventually be so diminished that you end up responding to fundraising appeals from people like Tony Perkins and Ken Ham.

Even worse, things like CharlieCharlie or like Ouija boards, can be ways of training ourselves to swallow nonsense in exchange for thrills, developing the habit of pretense until we’re almost completely able to forget we’re pretending. And that can turn us into the kind of people who go around repeating Mike Warnke stories or claiming that birth control murders babies. At that point, demonic possession would be redundant, for that is a process — as C.S. Lewis said — “which, if followed to the end, will make us into devils.”

* We should note, by the way, that Jesus’ original disciples did not agree that “all forms of divination are to be rejected.” After the death of Judas, they chose a new member of the Twelve by casting lots. That’s divination — no getting around that. And nowhere does the New Testament suggest that this form of divination was inappropriate.

I have to agree with Wendell Griffin, though, that this divination to fill the role of twelfth disciple was horribly myopic and destructive in other ways. Griffin notes that the disciples’ criteria for a new member was someone who “accompanied us during all the time that the Lord Jesus went in and out among us, beginning from the baptism of John until the day when he was taken up from us” and who could serve as “a witness with us to his resurrection.” And then, abruptly, they introduce us for the first time to two guys — Matthias and Justus — we’ve never heard of before in any of the Gospels. Despite seeking “a witness with us to his resurrection,” it didn’t even occur to the other 11 dudes to consider the actual witnesses to that event — the women who first visited the empty tomb, who had been present at Calvary, and who had accompanied Jesus “during all the time” that he had gone in and out among them. Dumb. And, as Griffin says, fateful.

May 30, 2015 Walmart.indricotherium
Recent Comments
0 | Leave a Comment
"So, you're saying I should change my name to JoJo."
hrurahaalm 12/1 Flashback: Cizik culture
"I consider that one of the few acceptable stand-ins for Gary Chalk."
penprp 12/1 Flashback: Cizik culture
"I hope that handmaiden of hers kills her -.-"
KN Cyphers 11/24 Flashback: ‘2,000 years’
"It's Chapter 11 bankruptcy, which is the "soft" kind where you keep your business and ..."
Vermic 12/2 Flashback: Ideomotor
Browse Our Archives
Related posts from slacktivist