Left Behind Classic Fridays, No. 44: ‘Reciprocity’

The last we saw of Hattie Durham she had just left Rayford’s steely lap after their helicopter ride home to the Chicago suburbs.

Hattie is the Pan Continental flight attendant who has been strung along by the older, married Rayford Steele. The book begins with a description of their non-affair affair:

What LaHaye and Jenkins show us of this relationship is very different from what they tell us about it. They don’t say what, exactly, Rayford’s “point” was in smiling at Hattie and holding her gaze, but it seems clear what he’s thinking: He could, but he won’t.

Hattie, on the other hand, would. For L&J, this is the only morally significant aspect of their relationship. Rayford isn’t willing to sleep with Hattie, so his behavior is virtuous. Hattie is willing to sleep with Rayford, so she’s a sinful little slut. That’s what they seem to be telling us, but it’s not what’s really going on.

Hattie, we read, is 27 years old and “drop dead gorgeous.” Yet she doesn’t have a boyfriend or much of a life outside of work. She’s willing to sacrifice all of that — she has sacrificed all of that — for Rayford. In return, he has given her not “so much as one brush of a finger.” Hattie gives and Rayford takes. But he is always, always careful not to take so much that he is forced to give in return.

L&J paint a disturbingly accurate portrait of a the kind of predatory, exploitative married man that young women would be wise to stay away from, yet they seem to think they’re describing the kind of homewrecking young woman that married men ought to stay away from. They seem to applaud Rayford’s self-control, when really he’s not demonstrating self-control, but the urge to control, to manipulate, others.

Thus we come to Rayford, briefly sympathetic after discovering that his wife and son are dead/raptured, awakening to the sound of a ringing telephone:

“Hello?” he said, unable to mask the sleepy huskiness in his voice.

“Captain Steele?” It was the frantic voice of Hattie Durham.

So he’s “Captain Steele,” and she’s “Hattie.” There’s reciprocity for you.

Hattie, we learn, has been trying to call Rayford for hours. She’s scared and needed someone to talk to, but she’s also worried about him. He tells her what he’s learned about his family. “I’m sorry,” she says. “Is there anything I can do?” Rayford, for his part, just wants to get off the phone.

“I’m scared to death of what’s become of my family.”

“Let me know what you find out, Hattie, OK?” 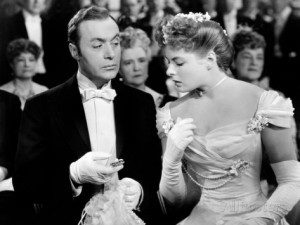 “I will, but you were supposed to call me. ‘Course my phone was dead, and then I couldn’t get through to you.”

“I wish I could say I tried to call you, Hattie, but I didn’t. This is hard for me.”

“Let me know if you need me, Rayford. You know, just someone to talk to or be with.”

“I will. And you let me know what you find out about your family.”

He almost wished he hadn’t added that. Losing his wife and child made him realize what a vapid relationship he had been pursuing with a 27-year-old woman. He hardly knew her, and he certainly didn’t much care what happened to her family any more than he cared when he heard about a remote tragedy on the news. … It had merely been a physical attraction, something he had been smart enough or lucky enough or naive enough not to have acted upon. He felt guilty for having considered it, and now his own grief would obliterate all but the most common courtesy of simply caring for a coworker.

One might think that genuinely caring for a coworker might involve more than not much caring about the death/disappearance of their entire family, but let that pass.

I’d held out some hope that the depiction of Rayford’s kinky control-freak stringing along of Hattie was deliberate, but that smart/lucky/naive sentence eliminates that possibility. Rayford feels guilty, but only about his considering sleeping with someone other than his saintly dead wife. He doesn’t feel any guilt — and L&J don’t ascribe him any guilt — for the way he has used and misused Hattie.

Yet for L&J, the one loving person in this lopsided relationship is the villain of the piece. Villains must be punished, and they have quite the punishment in store for this little slut.