When confronted with horrific evil, our first presumption, regardless of evidence, should be to blame the Presbyterians. Presbyterians, after all, are evil, monstrous others and we should fear them:

On Friday, July 31, three residents [two brothers and their mother] were found murdered in their home on Deerfield Drive in the coastal city of Pensacola. …

Their throats were slit, and [one victim] had a gun shot through his neck. As has been reported, the family was killed on Tues, July 28. and their deaths were caused by blunt force trauma by hammer. The police have ruled out robbery and are currently investigating.

This gruesome reality turned media frenzy after the department held an Aug. 4 news conference. During the opening speech, Sheriff David Morgan called the case “odd at best,” describing the family as reclusive. Then when he was asked about motive, he responded:

… initial research has led us to believe that there is a potential that it was a ritualistic killing … The method of the murder, blunt force traumas, slit throats, positions of bodies and then our person of interest has some ties to a faith or religion that is indicative of that.

When asked for more, Sheriff Morgan noted, “Well, again, the time of the blue moon every three years, the method of the murders and also our person of interest is known to practice this.” He was then asked directly “What religion?” Sheriff Morgan responded, “It is Presbyterianism.” The full news conference was uploaded to You Tube.

That was all it took. Within minutes, the local, national and, eventually, international media were reporting on the triple murder. “Presbyterian suspected in savage murder of family” reported the local CBS affiliate WKRG. The Washington Post announced, “Florida triple murder tied to ‘Presbyterianism’ and blue moon, police say.” And NOLA.com asked,”‘Presbyterianism’ and ‘blue moon’ behind Pensacola triple homicide?”

Shortly after, NBC quoted ECSO’s own Sgt. Andrew Hobbes saying, “It appears that this might be connected to some type of Calvinist ritual killing and possibly tied to the blue moon.” Presbyterianism suddenly changed to Calvinism. Several ABC and CBS affiliates around the country picked up the wording change. For example, one in Texas reported, “Reformed ritual may be motive behind deaths of three family members in Fla.” And, the UK’s Daily Mail announced, “Florida family murdered with a hammer in ‘ritualistic Calvinist killing planned to coincide with the Blue Moon‘ ”

The weird leap by law enforcement and media to attribute this brutal crime to Presbyterianism is wholly unfounded. For one thing, the killings took place several days before the full moon or “blue moon” on July 31. And in any case the sheriff just pulled that full moon stuff out of his backside — there’s no ritual or ceremonial importance to a blue moon in Presbyterianism. Nor is there any Presbyterian or Calvinist ritual that involves lethal violence, let alone — as the sheriff bizarrely suggested — a specific type of lethal violence involving a hammer and the particular positioning of the bodies of these victims. 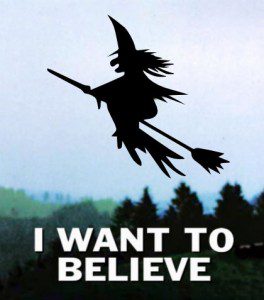 There was absolutely nothing about this crime scene that should have made any police officer or journalist imagine that this crime had anything to do with Presbyterianism at all. That’s just a nonsense claim fabricated out of whole cloth by a panicked sheriff who seems utterly ignorant about Presbyterianism and Presbyterians.

Granted, Presbyterianism, like all forms of Christianity, is rooted in ancient practices of animal sacrifice. And most Calvinists do subscribe to a theory of atonement that teaches their God once demanded the human sacrifice of a first-born son. But that was just the one time, and you won’t find any Presbyterian text or practice today that supports the idea of ritual human sacrifice. The millions of Americans who practice this “faith or religion” unanimously reject such things as morally abhorrent.

So where did this sheriff get the idea that this family-annihilating spree killer was motivated by religion? What made him leap to the unfounded notion that the use of a hammer during a waxing gibbous moon suggested a Presbyterian killer? And what made all those media outlets go along with that strange assertion?

Well, as you’ve probably guessed, Sheriff Morgan didn’t actually say “Presbyterian.” What he said was “witchcraft,” and then, later, “Wicca.” The link and long excerpt quoted above are from a post by Heather Greene on the terrific Pagan blog, the Wild Hunt. I went through and replaced every mention of “witchcraft” with “Presbyterianism” and every mention of “Wiccan” with “Calvinist” or “Reformed.” I did that to highlight the absurdity, offensiveness and bigoted ignorance of the way Sheriff Morgan and all those media outlets rushed to turn this crime scene into a literal witch-hunt. (Please click over to read Greene’s full original post without my editorializing changes.)

This [three days before the] blue moon stuff has nothing to do with witches or Wicca. Nor does a family-annihilation triple murder carried out with a hammer, or the position of the bodies, or any of the other imaginative nonsense spewed by the sheriff and amplified by multiple media organizations. The idea that any of that has anything to do with Wicca or witches is just ignorant garbage.

There’s only one religious ritual at work here, and it wasn’t the horrific acts of the killer. It was the religious ritual being performed by Sheriff Morgan and all the newspapers and TV reporters eager to spread his fantasies.

It is an ancient, long-practiced Christian ritual — the same ritual that we Christians have performed in witch-hunts and inquisitions and blood libels. The same ritual that is being performed, even now, in my Twitter feed, by good Christians pretending to believe they’ve seen proof that some coven of witches is selling baby parts to buy Lamborghinis. Given the choice between following Jesus and working ourselves into a self-indulgent froth of indignation over imaginary witches or other Satanic baby-killers, we always seem to choose the latter.

August 6, 2015
Let time forgive the past and go and make some other plans
Next Post

Sergiy Kyslytsya Has the Best Line This Year
Ukraine is fighting for its life. The U.S., the European Union, and...
view all Progressive Christian blogs
What Are Your Thoughts?leave a comment
Copyright 2008-2021, Patheos. All rights reserved.