Left Behind Classic Fridays, No. 46: ‘The Good Wife’

Toward the end of Buck’s long reverie in the airport men’s room stall, he writes up a to-do list:

Despite the incredible capablilities of his laptop, there was still no substitute for the pocket notebook. Buck scribbled a list of things to do before setting off again:

As always, for Buck, “things to do” entails a list of phone calls. Thus our next encounter with Buck involves five pages of phone calls — we were given fair warning.

(Jerry Jenkins seems to be employing a narrative device adapted from an Intro to Preaching class. Young preachers are taught to “Tell ’em what you’re going to tell ’em. Tell ’em. Then tell ’em what you told ’em.” This repetition can help a congregation remember the main point of your sermon, but in a novel it makes for stupefyingly dull storytelling.)

Buck doesn’t actually get through in his attempt to “Call Dad and Jeff.” But, this being “Left Behind: Quest for a Dial Tone” (as Sophist pegged it in comments earlier), we get a paragraph-long description of the unsuccessful phone call:

The line was busy, but it was not the same kind of tone that tells you the lines are down or that the whole system is kaput. Neither was it that irritating recording he’d grown so used to. He knew it would only be a matter of time before he could get through.

The first message on Buck’s answering machine is from Marge Potter, who tells him that his father and brother are OK, but his brother’s wife and kids are missing.

Marge, you’ll recall, is the “matronly” secretary of Buck’s boss at Global Weekly. Nearly a full day has passed since the mass disappearances whisked away every single child on the planet, but this fact has not yet registered with Marge or Buck or any of the other crack journalists at GW.

Hattie figured this out hours ago, and she even pointed it out to Buck, but it seems to have slipped his mind. This is understandable. Buck, after all, is a Very Important Journalist and his top priority just now has to be to get to New York to get started on a story about a conference of Jewish nationalists. Clearly, that’s a bigger priority for GW’s readers than some little item from the now-superfluous “parenting” pages.

Buck and the rest of the folks at GW are the most comically oblivious journalists ever portrayed in fiction.

Marge’s message sparks a mini-flashback in which we get a bit of background on Buck’s brother’s marriage:

Jeff must be beside himself not knowing about his wife, Sharon, and the kids. They’d had their differences and had even been separated before the children came along, but for several years the marriage had been better. Jeff’s wife had proven forgiving and conciliatory. Jeff himself had admitted he was puzzled that she should take him back. “Call me undeserving, but grateful,” he once told Buck.

So here’s what we know about Mr. and Mrs. Williams:

1. Sharon was a born-again, evangelical Christian. 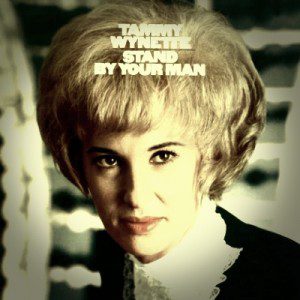 3. Jeff did something awful, something which even he considers unforgivable.

4. Sharon, the model of the good, godly wife, forgave Jeff and welcomed him back.

We aren’t told the specifics of the awful thing or things that Jeff did. He may have cheated. Or drank. Or maybe he hit her. Perhaps all three. For LaHaye and Jenkins, it really doesn’t matter what he did, all that matters is Sharon’s duty as a good, godly wife to forgive him and preserve their marriage no matter what.

That’s the point of this little vignette and it’s hardly unique to L&J. This message — the Gospel According to Tammy Wynette — is taught in evangelical congregations across the country. It’s a pernicious, dangerous and potentially even deadly little lesson about wifely duty.

As I write this, some poor Christian woman is talking to her pastor or her priest. When she walked into his office she was scared — it’s been getting worse and she feels she and her children are in real danger.

“Be like Sharon,” the reverend man of the cloth is telling her. “God hates divorce.” He will tell her that her desire to leave her abusive husband is an affront to “the sanctity of marriage.” He will not tell her, because it will not occur to him, that her husband’s violence constitutes a far greater violation of that sacred union.

She will leave the office still afraid, but her fear will be mixed with guilt and shame.

L&J didn’t invent this — it’s just a part of the culture of their target audience, such a large part that I’m certain I’m not just reading too much into this little tangent about Jeff and Sharon. That evangelical subculture, like any culture, has positive traits as well as negative ones. Here — as ever throughout the World’s Worst Books — L&J reinforce the bad while ignoring the good.

Have I mentioned that I think these books are evil?