The Satan-selling con-men are boring. Their Satan-buying audience is fascinating.

The Satan-selling con-men are boring. Their Satan-buying audience is fascinating. August 21, 2015 Fred Clark

Yesterday I wrote about Zachary King, the latest in a long line of self-professed “former Satanists.” King is a liar and a con artist, but whatever, he doesn’t really interest me all that much. The problem isn’t con artists like King. The problem is their audience.

King is just the most recent “Satan seller” stepping up to meet the unmet demand for this shtick ever since Mike Warnke was exposed as a liar and a fraud. There’s a huge audience desperate for someone to come along and take all the money and adulation they used to shovel at Warnke, and we can hardly blame a guy like Zack King for taking advantage of that opportunity. Birds gotta fly, fish gotta swim, grifters gotta grift.

When I say that King is exactly like Mike Warnke, that’s not a criticism of him — or even of Warnke.* 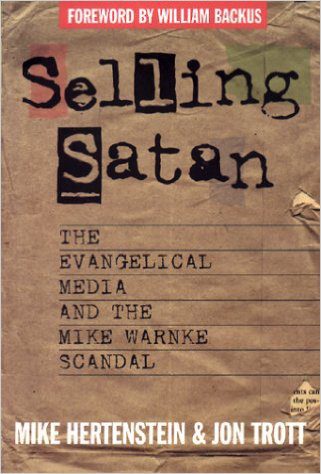 I love the book Selling Satan: The Evangelical Media and the Mike Warnke Scandal by Mike Hertenstein and Jon Trott. It’s a terrific piece of investigative journalism — one that any would-be journalist would benefit from studying because of the way the authors’ earnest evangelical piety makes them reluctant skeptics. Hertenstein and Trott are instinctively nice — they’re inclined to be trusting, forgiving and gracious. It clearly pains them to apply the skeptical tools of the journalist to others they regard as brothers and sisters in Christ. But they do it anyway, and the result is something like reading All the President’s Men as written by Rod and Todd Flanders.**

But Selling Satan only tells half the story, and it is, by far, the less interesting half.

The authors provide extensive, ironclad, thorough documentation proving that Warnke is a liar and a fraud. The compilation of that evidence is a valuable service. But Mike Warnke’s story, ultimately, is fairly bland. Why did he lie? For money. Yawn.

But their audience … ah, those folks are interesting. They’re not chasing money. They’re after something else — something they value more than money, or integrity, or truth, or reality. And that is worth exploring.

I read Sarah Zagorski’s article on Zachary King at LifeNew.com and I am, frankly, bored by Zack King. But I am fascinated by Zagorski, and by her bosses at LifeNews.com, and by the huge audience of “pro-lifers” who create the demand-driven market for clichéd con-men like Zack King.

There was a woman in stirrups about to have a baby who was surrounded by 13 top members of our coven, which were all high priests and priestesses. I was inside the circle with the woman and the abortion doctor. All the adult members of my coven were there. There were several women kneeling on the floor, swaying back and forth chanting “our body and ourselves” over and over again. Off to the side were several male members of our coven all chanting and praying. …

The doctor reached in, ripped the baby out and threw it onto the floor where these women were swaying. The women looked like they were possessed, and when the doctor threw the baby out to them, they cannibalized the baby.***

I have, for years now, attempted to explore what it is that would make anyone want to believe that such things really happen, routinely. I have proposed and supported and defended several theories about why it is that so many millions of American Christians want or need such stories to be real.

Those theories, obviously, are not flattering to those millions of American Christians, because how could they be? How could there be any healthy, admirable, faithful, loving explanation for why people would desperately want to believe in cannibalistic Satanic baby-killers?

But let’s not worry about those explanations or those motives just now.

Here let’s just note, yet again, the sheer fact we have just encountered. Not the fact that a guy like Zack King is claiming to have witnessed and perpetrated outrageous horrors, but the fact that Sarah Zagorski is happy and eager to report them, and the fact that LifeNews.com considers such horrors a story “too good to check.”

And the fact that millions of “pro-life” American Christians have just shown us, yet again, that they prefer this monstrous fantasy to reality — that they cannot tolerate daily life a world that doesn’t include cannibalism and Satanic baby-killers killing babies for Satan.

* We can, however, criticize Zachary King for his shoddy craftsmanship. He’s got the hair and the look, but apart from that he seems like a hack. Most of his patter is lifted, verbatim, from stuff written decades ago by guys like Warnke and Bob Larson. There’s no originality, no flair, no sense that he’s moving the story forward or making it his own. That’s just lazy. And it makes him the con-man equivalent of a joke-thief.

King’s only innovation seems to be his decision to focus on a less-tapped-out niche audience. Warnke’s and Larson’s shtick played well among white evangelicals, so King seems to be testing how it works among far-right Gothic Catholics. That’s shrewd, but he doesn’t seem to have fully explored the different approaches needed to milk that audience. Warnke raked it in from evangelicals through the collection plate and scary direct mail fundraisers, plus he sold books and albums and VHS tapes. King, likewise, is working the speaking circuit and selling DVDs and, eventually, books. (He needs to get his butt in gear and finish those, even if that means hiring a ghostwriter — that’s what Larson and Hal Lindsey did and it worked for them.) But King doesn’t seem to appreciate the difference between the shlock for sale in your local Family Christian Book Center and the shlock for sale in your local St. Jude Shop. If a crafty pro like Warnke had been working the Catholic angle, he’d have been pulling in five figures a month just in candles and rosaries and prayer cards.

** There’s so much to read, so if I can’t convince you to add the entire book to your nightstand pile, let me just urge you to read, at least, Hertenstein and Trott’s final chapter. That surreal coda finds these good evangelical guys enjoying the hospitality of Anton LaVey — founder of the “Church of Satan” and longtime bogeyman of white evangelical Christians. The bogeyman serves them tea. He plays the piano and sings some Gershwin standards.

*** That bit about the Satanic baby-killing cannibal women chanting “our body and ourselves” is the one glimmer of originality that makes me wonder if, perhaps, Zachary King is more than the two-bit, derivative huckster he otherwise appears to be. That line is so transparently over-the-top that King seems to be winking broadly at the camera. This suggests two possibilities. One is that King simply has such contempt for the rubes he’s fleecing that he can’t resist pushing the limits of how much he can get them to swallow.

But there’s another possibility — one which might also explain why he hasn’t yet finished those books he’s supposedly writing and why he’s been so lackadaisical in exploiting other ways to monetize this shtick. It’s also possible that King is playing a long game of performance art — something in the vein of Andy Kaufman or Lucien Greaves. It’s possible that “Former Satanist Zachary King” is a character created by an artist (who may or may not also be named Zachary King) in order to explore the very questions I’m discussing here about the nightmare-desiring audience for this sanctimonious horror story.

August 22, 2015 Smart people saying smart things (8.22)
Recent Comments
0 | Leave a Comment
Browse Our Archives
get the latest from
slacktivist
Sign up for our newsletter
POPULAR AT PATHEOS Progressive Christian
1