The uncanny sex fiends of Christianity Today (No. 3)

The Ashley Madison thing happened and, because this was a big story involving sex, Christianity Today was all over it. A sex-soaked story like that fuels the writers at CT the way drugs and alcohol fueled Hunter S. Thompson. Thus CT gave us post after post with a half-dozen different hot takes on the Ashley Madison hack and What It Means for the Church.

Some of those takes weren’t bad, including several from Ed Stetzer, a devout pollster who’s kind of the Southern Baptist version of Nate Silver. Stetzer’s response to the Ashley Madison hack was to consider what the fallout from its revelations might mean for his church-going evangelical readers. He was writing more as a pastor than as a number-cruncher — as someone trying to care for his flock. So he kicked out a rapid succession of posts consoling and advising those who may be about to learn that their spouse was unfaithful, or that a friend or family member was having an affair. Or even that the pastor of their church was. 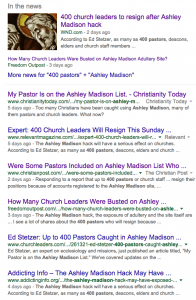 Before getting to his actual advice to any reader in such a predicament, Stetzer first briefly attempted a ballpark guess as to how many such readers there might be. He frames this as only an estimate, one based on just kind of asking around and not on any hard data of any kind, and he lands on a big, round number:

Based on my conversations with leaders from several denominations in the U.S. and Canada, I estimate that at least 400 church leaders (pastors, elders, staff, deacons, etc.) will be resigning Sunday.

For a number-cruncher like Ed Stetzer, that word “estimate” and his caution that this is based only on “conversations” are strong language underscoring that this is hasty guesswork. But his readers didn’t see it that way. Based on his reputation as an expert on the concrete data of white evangelical church life, his guess here took on a life of its own as a new fact.

The word “estimate” disappeared, as did Stetzer’s broad reference to “church leaders (pastors, elders, staff, deacons, etc.).” And the conditional, future-tense possibility of his guess morphed into a past-tense event. Suddenly, we were seeing all sorts of reports on the scandalous fact that “400 pastors resigned following the Ashley Madison hack.”

Did anything like that actually happen on Sunday? Did hundreds of pastors resign?

We didn’t see 400 pastors, or even 400 elders/staff/deacons resign on Sunday. Or even 100. Or even 10 — at least not that I’ve heard of. The handful of religious leaders stepping down to to their exposure in this hack so far hasn’t included anybody involved in local church ministry. There’s been a white evangelical reality TV star and religious right fundraiser, a YouTube “celebrity,” a Calvinist parachurch leader, and an imam.

Ultimately, I think Captain Cassidy of Roll to Disbelieve is right about why we shouldn’t expect to see very many pastors caught in the Ashley Madison scandal. Pastors who are inclined to have an affair, as Cassidy writes, “already have a dock from which to fish.” They don’t need to turn to a website for help when they can pursue and conduct — and control — such affairs far more easily within their own little kingdoms.

Granted, there may be other church leaders involved with Ashley Madison whose personal crisis will never make headlines — local deacons or Sunday school teachers or youth ministers quietly stepping down to spend more time with (and begging for forgiveness from) their families. And there may also be quite a few local church leaders whose email addresses are somewhere in all that hacked data, but who will never be exposed because their congregants lack either the skepticism or the tech-savvy to search for their names.

But the bottom line is that we didn’t see anything like Stetzer’s original guesstimate of a calamitous Sunday, and certainly not anything like the runaway “fact” of “400 pastors to resign after Ashley Madison hack” that his offhand comment metastasized into.

It’s sadly ironic that Ed Stetzer — a guy who has worked hard to avoid and debunk imaginary data — wound up accidentally spawning this new bit of numerical truthiness.

But then Stetzer has also been a big fan, and big promoter, of imaginary truthiness in other areas (“Planned Parenthood is selling baby parts!”), so there’s a bit of karmic justice here, too.

September 2, 2015
It's a wondrous world of ridiculous things
Next Post