Alan McCornick discusses Germany’s sudden, impressive commitment to sheltering large numbers of Syrian refugees. This display of hospitality and basic human decency on the part of the German public and its political leaders puts to shame the current American response to this refugee crisis. The U.S. is currently committed to welcoming only 1,500 Syrian refugees. Even America’s more aspirational goals — President Obama’s pledge to accept 10,000 refugees next year, or the call from Church World Service and other religious leaders to welcome 100,000 — pale in comparison to what Germany has already begun doing.

Church World Service, by the way, is a terrific resource for anyone — religious or not — who wants to learn what they can do to assist refugees here in the U.S. They’ve been welcoming and settling refugees since 1946, helping some half a million people over the years. They know the process, the logistics, the nitty-gritty of it all and what that requires. If anyone is looking to donate or volunteer, they can put you to work, productively.

Germany’s recent wave of openness to people in need has also met with some criticism, as McCornick relates:

[German Chancellor Angela] Merkel was given an honorary degree in Bern, Switzerland, the other day. Following the ceremony there was a Q&A session. “You’re doing a lot to help the refugees,” one woman asked. “What are you doing to protect our Christian values?”

That is an amazing question — almost eloquent in its obtuse blasphemy. Over here, in one distinct category, is this matter of helping refugees. And then, way over here, is a wholly separate and distinct category of “our Christian values.”

What, exactly, are these “Christian values” she speaks of? Whatever they may be, all we know for sure is that they do not include “doing a lot to help the refugees.” That, the question suggests, seems to pose a danger, a threat to “our Christian values.” It is separate from them and opposed to them.

I’m reminded again of that passage from the epistle of James that we discussed last week: “Religion that is pure and undefiled before God, the Father, is this: to care for orphans and widows in their distress, and to keep oneself unstained by the world.” This good Christian woman questioning the refugee-threat to her Christian values exemplifies the way this verse baffles white Christianity. Our job as Christians, she believes, is to “protect our Christian values.” That means keeping ourselves pure and undefiled, unstained by the filthy world. How can we do that while caring for orphans and widows in their distress or “doing a lot to help the refugees”? The two things are, in this view, incompatible and irreconcilable.

We can imagine this same woman standing to ask this same question at the end of Jesus’ parable of the sheep and the goats in Matthew’s Gospel:

When the Son of Man comes in his glory, and all the angels with him, then he will sit on the throne of his glory. All the nations will be gathered before him, and he will separate people one from another as a shepherd separates the sheep from the goats, and he will put the sheep at his right hand and the goats at the left. 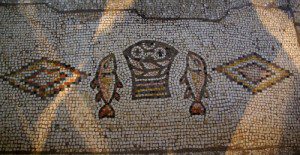 Then the king will say to those at his right hand, “Come, you that are blessed by my Father, inherit the kingdom prepared for you from the foundation of the world; for I was hungry and you gave me food, I was thirsty and you gave me something to drink, I was a stranger and you welcomed me, I was naked and you gave me clothing, I was sick and you took care of me, I was in prison and you visited me.”

And the king will answer them, “Truly I tell you, just as you did it to one of the least of these who are members of my family, you did it to me.”

Then he will say to those at his left hand, “You that are accursed, depart from …”

And they will interrupt, saying, “Lord, you’re doing a lot to help the refugees, but what are you doing to protect our Christian values?”

That question is an alarm bell showing that something is disastrously, catastrophically askew with our Christianity and our notion of “Christian values.” Although the framing of the question, I suppose, actually shows that there are (at least) two things that are askew — two things that have gone horribly wrong.

First, there’s the notion that “doing a lot to help the refugees” is distinct from the business, the practice, or the essence of Christianity. Helping refugees, feeding the hungry, sheltering the homeless, aiding widows and orphans in their distress, and all the other corporal and spiritual works of mercy and justice have become — at best — a nice little additional thing that it’s generally commendable to dabble in a bit. It’s an extracurricular that’s probably permissible, but only if it doesn’t interfere with the rest of your schoolwork. Just don’t get carried away with it.

And second, we have this category of “our Christian values” that appears to be, on closer inspection, devoid of content and substance. It’s an ornate treasure chest with nothing inside.

It’s a very busy sort of nothing — forms of prayer and worship and scripted piety and institutional inertia and lots and lots of worrying about what everyone’s genitals might be up to. But it’s all fruitless. It’s fruitless by design — prevented and restricted from bearing any meaningful fruit other than producing more of the same busy nothingness. It’s abstract — abstracted from “doing a lot to help” orphans and widows and refugees, and thus, itself, helpless.

Such “Christian values” cannot be protected. There’s nothing there to protect.

(Wikimedia photo by Berthold Werner shows mosaics from the Church of the Multiplication in Tabgha, near Galilee.)