The good news is that, unlike back in 17th-century Salem, no one was literally hanged as a witch during the late-20th-century American witch trials of the Satanic Panic. But many people were wrongly imprisoned — some still are — and many lives were destroyed.

Dan Shewan revisits the Satanic Panic, and examines its enduring effects, in a mostly terrific piece called “Conviction of Things Not Seen: The Uniquely American Myth of Satanic Cults.” This may cover a lot of familiar territory for those who have read about all this before (perhaps on a blog that may seem to be thuddingly repetitious in its obsession with this topic), but Shewan’s piece includes some valuable new material, including interviews with Lucien Greaves of the wickedly satiric Satanic Temple, and with Kenneth Lanning, the FBI Special Agent whose 1992 report helped to debunk claims of a Satanic conspiracy of ritual abuse:

“My role in the FBI Behavioral Science Unit was as a case consultant,” Lanning says. “Eventually I consulted on hundreds of cases, including some from outside the United States — far more cases than I could ever have personally investigated,” he says. “In my FBI position, I also became a kind of informal clearinghouse for most of the cases from their beginnings in the early 1980s until the growing skepticism took hold in the early 1990s. Before most professionals had seen their first case, I had consulted on and analyzed dozens of them.”

Lanning’s report critically examined the often-fluid definitions of Satanism that were used interchangeably by many law enforcement agencies, as well as debunking supposed indicators of Satanic crime highlighted during police training seminars such as symbolism in heavy metal music and fantasy role-playing games such as Dungeons & Dragons. Lanning also offered several alternative explanations for similarities among the disparate eyewitness accounts, including pathological distortions commonly observed in cases of Munchausen syndrome. It was the first time anyone had objectively challenged the commonalities in cases of ritual abuse that police forces across the country were taking as irrefutable evidence of Satanic cult activity.

“Generally, the response [to the report] was positive,” Lanning says. “Several law enforcement supervisors thanked me for bringing objectivity to the issue. Of course, nothing I wrote would reach or convince everyone of my point of view. I received several letters from some questioning aspects of what I had written or said. One officer wanted me investigated by Congress. Perhaps most upset were those law enforcement officers who were making money and getting status as experts in this area.”

Ah, yes, the money. “Follow the money” is always useful advice, and “the money” did play a role in the spread of this moral hysteria. People like Michelle Smith, Lawrence Pazder, Laurel Rose Willson, and Mike Warnke raked in a tidy sum peddling their fabricated stories of outlandish Satanic threats. And then there was the cottage industry Lanning refers to of law enforcement and former-law-enforcement officers holding themselves up as experts and consultants — people like Dale W. Griffis — and raking it in by conducting “seminars” or consulting as “expert witnesses.”

But it’s not the people who made money who interest me. I’m intrigued by the vastly greater number of people who spent money — not the “Satan Sellers,” but the Satan buyers. They weren’t in this for the money.

The transparent grifters are easily understandable. Their audience is more of a puzzle.

Lanning came to this same view of the whole phenomenon:

In addition to questioning the criminal significance of occult symbolism, Lanning’s report also warned of the danger of reducing the complex issue of child abuse into a pat, simplistic narrative — a tendency that marred many cases of Satanic ritual abuse and raised the important question of why so many people accepted wild allegations about Satanic cults in the absence of any hard evidence.

“Although I did not realize it at first, I came to learn that the last of my key questions was actually the most significant. If something wasn’t happening, why do so many intelligent, well-educated professionals believe it is?” Lanning says. “Regardless of intelligence and education, and often despite common sense and evidence to the contrary, adults tend to believe what they want or need to believe; the greater the need, the greater the tendency. There was a need to believe.”

What could motivate such a perverse “need to believe”?

“Faith is the assurance of things hoped for,” Hebrews 11:1 says. That, I think, is more relevant to Shewan’s topic than the latter half of that verse, quoted in the title to his piece. The witch-hunters of the 1690s and the 1980s acted with apparent conviction based on “things not seen,” and they eagerly convicted others of things not seen, but the most perplexing thing about witch-hunters is their “assurance of things hoped for.” 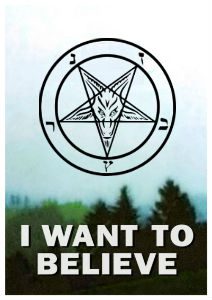 The things they hope for are monstrous. What is the worst thing you can imagine? They hope it is true. They assure themselves, and reassure themselves, with the idea that it is. That’s what this “need to believe” entails.

This need to believe in a conspiracy of evil witches is more understandable, I think, in cases like that of the West Memphis Three — three young men wrongly convicted and imprisoned for the alleged Satanic ritual murder of three young boys in Arkansas. The crime did not, in fact, involve any kind of Satanic cultic rituals, and the three young men convicted of that crime were not guilty of it. But there was a crime. Someone killed those three young boys whose bound, lifeless bodies were found in a West Memphis creek. Someone did that evil thing to them.

That case, in other words, involved outlandish attempts to explain actual evils and an actual crime. But most of the Satanic Panic did not involve cases like that. More often, there was no evidence of any crime having occurred at all. It wasn’t a matter of struggling to imagine what kind of evil people might have done such horrifically evil things, but rather a matter of imagining horrifically evil things and then behaving as though they had occurred. In West Memphis, fabricated evidence was used to convict innocent people of a crime. In those other cases, crimes were fabricated.

The supposed evidence for these invented crimes was the testimony of very young children. Lanning notes that the “need to believe” the testimony of these young victims is understandable — laudable even. But this doesn’t solve the puzzle about this need to believe, it only kicks the can one step farther down the road, because, as Shewan writes, it turns out this testimony did not originate with these very young witnesses: “subsequent review of these cases revealed that much of this testimony was obtained through coercion and suggestive interviewing techniques.”

These children affirmed what they were asked to affirm or repeated back the accusations they were encouraged to repeat. Shewan blames this form of manipulative fabrication on “overzealous social workers,” but police, clergy, and — most of all — parents, also played a large role in manufacturing and securing such false accusations.

That word “overzealous” also begs the question and, thereby, misidentifies the problem. An overabundance of zeal to protect children from abuse was not the problem here. The problem, rather, was the idea that there existed a particular form of abuse from which children require protection: witches. And the zeal these manipulative questioners displayed had far less to do with protecting children from witches than it did with confirming the existence of witches.

That last sentence, to be clear, is an imputation of bad faith. It suggest that the witch-hunters of this moral panic were not trustworthy, that they were duplicitous and disingenuous — claiming to seek one thing (protecting children) while primarily seeking another (proving the existence of witches).

We’re often told that we must never suggest such a thing. We must never impugn the motives of others — never assume bad faith, always attribute the best-possible motive, always give the benefit of the doubt. Those are good rules. Like the principle of “innocent until proven guilty,” those rules ensure a measure of procedural fairness and justice.

But the presumption of innocence does not require a conclusion of innocence — that rule does not rule out the possibility of a guilty verdict. And the benefit of the doubt is not an eternal, inexhaustible resource. We should never presume bad faith, but we should also never preclude the possibility of it when following the evidence leads us that way.

I did not start with the presumption that witch-hunters are acting in bad faith. But that is the conclusion at which I have arrived because I have not yet found any other explanation that can credibly explain their behavior.

I remain open to suggestions though. I invite them, and I’ve collected a few possibilities worth discussing later. Anyone have any more?

September 16, 2015 More richer than my tongue
Recent Comments
0 | Leave a Comment
"More generally, politics is the alternative to war, and the most important function of politics ..."
3lemenope 8/14 Flashback: Democracy > elections
"We have mistakenly applied capybaras' temperament to a creature that is very much not a ..."
KhazadDoom 8/13 Flashback: Sharing the Bad News
"They all decamped to their own mountain, where things actually get washed. The boy children ..."
KhazadDoom 8/13 Flashback: Sharing the Bad News
"I think you need those people + the people who process government forms. If you ..."
Antigone10 8/14 Flashback: Democracy > elections
Browse Our Archives
Related posts from slacktivist