How to Lose Friends and Influence People

This issue is personal to me. I grew up in the Jim Crow South surrounded by bigots (though not, thank God, in my immediate family). Although I never gave them encouragement, I also wasn’t exactly a profile in courage when it came to calling them out. And that silence can be habit-forming. Much more recently I was required to work with a certain Democratic operative who for all his technical virtues was privately crazy when it came to Muslims — thought they should all be expelled from the country! I may have mildly objected to his periodic explosions on the subject, but my basic reaction was to change the subject and get back to the project we were working on.

I regret that now, and realize that while I certainly do not have Donald Trump’s complicity in the climate of opinion in which anti-Muslim bigotry flourishes, we really shouldn’t tolerate this crap, which is all around us.

The key to that, I think, is his recognition that “silence can be habit-forming” — meaning it can also be character-forming and soul-forming. You’re practicing, training yourself to become whatever it is you’re becoming. Those habits stick. We become them.

Silence also trains others and helps to shape who they become. Silence encourages them to continue on the path they’re on, or even to pick up the pace. It reinforces their willingness to continue saying, thinking and promoting hateful ideas, reaffirming and buttressing those ideas in their minds and hearts. And thus silence does them an injustice, just as surely as it does an injustice to the not-present-to-speak-for-themselves targets of their bigotry. 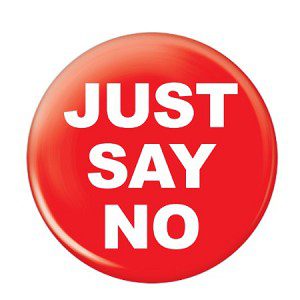 We shouldn’t think of speaking up as a Big Deal. It doesn’t really require a “profile in courage” — or a great deal of courage at all. Nor does it require eloquent language or intricate thought, really, just one word: “No.” You can add to that, elaborate a bit as necessary, but that’s the key word. “No.”

And because that word is true, it’s solid ground. Solid ground doesn’t really need to do much of anything to bring a bigot in free-fall to a painful halt.

There’s a bit of folk-wisdom that says you should never lend money to a friend unless you are willing to part with one or the other for good — either the money or the friend. So it’s important to decide ahead of time which one is more important to you. For me, the friend is usually more important, so I plan to keep the friend by determining that I shouldn’t plan on seeing that money again. (If it does come back, later, then yay! Bonus!)

But something like that is also true when it comes to lending your integrity to friends (or relatives, acquaintances, co-workers, fellow parishioners, potential voters, etc.). You need to be willing to part with one or the other because it may turn out that you’ll only be able to keep one of them. If this friend/acquaintance starts spouting something hateful and bigoted you need to decide if you’re willing to part with your integrity — developing a habit of silence — in order to maintain the friendliness and collegiality you might have with that person. Or you can go the other way, the better way, and be willing to lose that friendliness and possibly that friend in order to speak up and, thereby, keep your soul.

I think Norman Vincent Peale’s famous sales pitch gets it backwards. We don’t always influence people by making friends. We often have a greater influence on people by being willing to lose friends.

Here’s the thing though — speaking up won’t cost you as many friends as you might think. Sure, some hateful people are so utterly invested in and identified by their hate that they can’t afford to associate with anyone who doesn’t reinforce the lie. Speaking up will probably chase them away for good. Shake the dust off your feet and bid them good riddance. But with many others, speaking up and disagreeing with them will earn a measure of respect — begrudging respect, perhaps, but respect all the same. They’ll know where you stand, and will recalibrate their friendship — and what they say around you — accordingly. But you’ve paid them the compliment of speaking to them truthfully, and while they may never quite articulate that thought to themselves in quite that way, or think of it in such terms, they’ll be grateful you did so.

Now, because this is the Internet, where things often get flamey, we should say one more thing. A willingness to lose friends and friendliness doesn’t mean an eagerness to do so. Losing friends should not be a goal in and of itself. “Speaking up” shouldn’t mean being a self-righteous jerk — because that, too, can be habit-forming and character-forming and soul-forming.

Paul Waldman provides a good example of making such distinctions, contrasting Donald Trump’s silence in response to the bigotry of his supporters with John McCain’s 2008 silencing of a bigoted birther at a campaign event:

Many people were immediately reminded of the time in 2008 when a woman at a McCain rally told the senator, “I can’t trust Obama. I have read about him, and he’s not — he’s an Arab.” McCain took the mic from her and said, “No, ma’am. He’s a decent family man, citizen, that I just happen to have disagreements with.” McCain got a lot of credit for standing up to her (even if I’m sure he wouldn’t say that one can’t be both an Arab and a decent family man), knowing as he did that plenty of his supporters shared some version of her views.

McCain got the important bit right: “No, ma’am.” But he also, as Waldman notes, stumbled a bit in his response by not challenging — and awkwardly almost reinforcing — the idea that calling someone “an Arab” is a self-evident insult, a slur that indicates one is incapable of also being a citizen or a “decent family man.”

McCain needs to learn to do better on that latter bit. And that needs to be explained to him in a way that will challenge him (and, ideally, help him) not to repeat that mistake. But this fumbling bit of his response was also clearly just that — a mistake. He made a mistake and implied something he did not intend to imply. Treating a mistake as indistinguishable from a crime is also a form of injustice and of hateful language. (Yes, as the slogan says, “intent is not magic.” But it does matter. Intent doesn’t magically erase harm or consequences, but dismissing the significance of intent while simultaneously calling out someone for their intent is foul play.)

But while we shouldn’t just let McCain’s statement go, blessing it with silence, it would be supremely dishonest to treat his remark the same way as we do the deliberate, willful hate he was addressing. The same could be said, I think, for Ed Kilgore’s unfortunate use of the word “crazy” in characterizing his Islamophobic former-colleague. That’s careless language that can be harmful, and it needs to be addressed, but it’s in a different category than the kind of willfully hateful language Trump’s New Hampshire supporter was using. And those different things merit a different kind of response.