Donald Trump, ‘Playboy,’ and when bigots were kids

News item: “Trump Might Not Talk to Playboy Again: ‘It’s Not the Same’ Without Nudie Pics.”

Donald Trump’s presidential campaign has tapped into the fecund politics of resentment, appealing to those who fear change and want everything to just go back to the way it was before.

Before what? Just before — before anything changed anywhere from the idealized past they imagine. Before anything came along that confused or frightened them or called on them to grow or to care or to strive.

You know, the way things were before. Before there were gay weddings and black presidents and universal health insurance. Before the NFL outlawed helmet-to-helmet hits on the quarterback, before they said Pluto wasn’t a planet, before they started taking away our trans fats and our polio and our beloved inefficient light bulbs. Before you had to press 1 to hear good old American English. Before New Math. Before Seneca Falls and Selma and Stonewall. 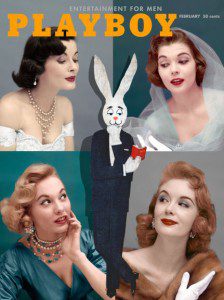 And this jumbled up, idealized nostalgia seems to include all of that. I overheard a seamless rant recently that started as a complaint about Chase Utley’s suspension for a leg-breaking tackle-slide in baseball and ended up with a declaration that the idea of a female president was wholly unacceptable. It was dizzying how quickly and inexorably he moved from his opening words, “F–k Joe Torre,” to his final words, “F–k Hillary.” The two things were interwoven in the ranting guy’s mind. They won’t let ballplayers act like Ty Cobb anymore. They want to let women be equal to men.

Unvarnished bigotry obviously plays a huge role in all of that, and to some extent these other complaints about how much better things were “before” function as shorthand proxies. They’re a way of expressing racist, xenophobic, anti-gay or misogynist sentiments without risking getting called out for it. I see this quite a bit in Aisle 3 at the Big Box.

Aisle 3 is Light Bulb Land — a vast, astonishing array of a dizzying variety of light bulbs in every shape and size, from giant floodlights to the tiniest of appliance bulbs. But Aisle 3 also makes some people angry — because it’s not like it was before. You can’t go there and buy a 60-watt incandescent bulb that’ll burn out in three months, wasting huge amounts of energy by kicking out enough heat to cook a Holly Hobbie brownie. And some people claim to resent that.

We can show them an efficient, long-lasting bulb that looks just like the old bulbs they claim to have preferred — one that casts the same warm yellow light they say they miss so much, but that usually doesn’t satisfy them. Because, of course, they’re not really nostalgic for mid-20th-century technology — they’re nostalgic for the way things were before, when gay people could be forced into hiding and it was unthinkable that anyone other than a white male could be president. Their proclaimed preference for the inferior lighting options they had when they were kids is largely just a euphemism for bigoted animus toward a variety of people who aren’t like them.

But that bigotry isn’t the whole story. It’s inseparable from a larger bewilderment — both a cause and an effect of that confusion. But that confusion itself is another key factor driving this desire to go back to the way things were before.

Things used to be so much simpler, so much easier, so much happier, in the idealized past they imagine they remember, before they starting ruining it all and “snuffing out the America that I grew up in.”

That’s a quote from Speaker of the House John Boehner. Specifically, Boehner was blaming Democrats for “snuffing out the America that I grew up in.” Or, in other words, he’s blaming Democrats for everything that’s harder about the world now that he’s a grown up. Being an adult is hard. No one tucks him in at night anymore, reads him a bed-time story, and then kisses him softly on the forehead as he drifts off to sleep. He blames Democrats for this.

Paul Waldman calls this “The False Glow of Remembered Childhood“:

When you’re a child the world is simple and innocent. Your parents take care of feeding and clothing and housing you, and if you’re lucky the biggest problem you have is what you’re going to get for your birthday. But your world only looked like the world because children are naive. That’s part of what makes childhood wonderful, but once you grow up you should come to an understanding of what it was and what it wasn’t.

Waldman, correctly, highlights this classic Daily Show bit as “the definitive statement on this.”

Correspondent John Oliver struggles to identify what it is that a long string of conservative pundits — Glenn Beck, Sean Hannity, Bill O’Reilly, among others — mean when they all talk about how much better America was “when we were kids.” Then, finally, it hits him: “It was a better, simpler time,” Oliver says, “because they were all 6 years old. For children, the world is always* a happy, uncomplicated place.”

The “happy, uncomplicated place” that you might imagine you remember from when you were a child is the world that Donald Trump is promising his supporters he will restore to them. This is pretty much the same thing that the biggest fundraisers of the religious right have long been promising to do for their supporters — which is part of why Trump is doing well with voters in that religious right constituency, even despite his hilariously inept attempts to pose as one of them.

This is also why Trump can come out and lament that Playboy will not be “the same” if it follows through on its plans to stop running pictures of nude women. Religious right voters have long condemned Playboy as an emblem the modern depravity that is ruining America. But I don’t think that defending pictures of nude women in Playboy will hurt Trump’s standing with religious right voters, because what he’s saying there is still congruent with their core message: Change is bad and we need to go back to the way things were before.

“When I was a kid” has changed since back when I was a kid. It’s a new generation and a new century. I sat in my church youth group listening to Sketch Erickson bemoan the evils of rock and roll, tracing all of the ills of modern society back to Elvis. Aron. Presley. But Elvis has been dead for nearly 40 years. He no longer serves as an icon of all that is frightening and confusing about the future. Now he’s a nostalgic icon of the past — part of that blessed, idealized before that social conservatives long to restore.

And for anybody younger than about 60, so is Playboy. The magazine was founded in 1953, so unless you were born before then, it was already around as part of the simpler, happier, less-complicated world of your childhood. When I was a kid, I often heard my elders lamenting that when they were kids, newsstands weren’t brazenly peddling pornography. But now, they complained, Playboy was everywhere — at the gas station and the 7-Eleven, and they wanted to get rid of it and to go back to the way things were before. (Plenty of those same people are still around, still saying that same thing. Phyllis Schlafly is 123 years old and she hasn’t updated her shtick since 1972.)

A generation later, though, and those days of bemoaning Playboy at the 7-Eleven have become part of the idealized past. That’s part of the before that we’re desperately trying to bring back.

This is true even for religious conservatives who remain steadfastly opposed to the legal sale of nudie magazines. That opposition is still tangled up with all the fear and confusion (and tribal bigotry) that manifests as an aggressive opposition to the way they are changing everything and “snuffing out the America that I grew up in.” Playboy’s decision to stop publishing new nude photos of women is just the latest in a long line of bewildering, enraging changes. It gets blurred together with marriage equality, universal health insurance, black presidents, bilingual immigrants, the NFL’s new rules for kickoff returns, and those terrifying new efficient lightbulbs.

The world is supposed to be just like it was before — back when we were kids. That means bedtime stories, playing in the back yard, prayer in schools, leaded gasoline and lousy lightbulbs, women and minorities who knew their place, gays in the closet, white men in the White House, and centerfolds in Playboy.

* Not for all children, sadly. Waldman’s qualifying “if you were lucky” is sadly necessary. But I hope that childhood was mostly happy and uncomplicated for you, as it apparently was for Beck and Hannity and O’Reilly and Boehner.

October 19, 2015
We laid ourselves the best of plans
Next Post