A new survey from the Pew Research Center attempted to gauge American’s views of science. Instead, it produced an incoherent mess of scrupulously measured nonsense. Oops.

The problem, it seems, is that the nice folks at Pew allowed anyone responding to the survey to define for themselves what “science” means. This makes the survey’s main supposed finding meaningless.

Well … not quite meaningless. But it means that the survey says something very different from what the headlines are claiming it says — including the headlines written by the Pew Research Center itself.

Here’s Pew’s own headline: “Highly religious Americans are less likely than others to see conflict between faith and science.” 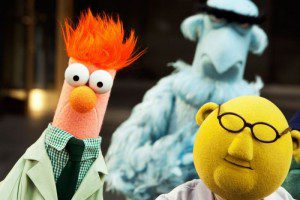 That’s not true. That’s not what Pew’s own survey shows.

But this weird, distorting spin on the survey is being widely repeated. Here’s the headline at Christianity Today*: “Churchgoers Least Likely to See Science and Religion in Conflict.”

Again, no. That is not at all what the survey shows.

What the survey shows, rather, is that Churchgoers Are More Likely to Redefine Science as That Which Does Not Conflict With Their Religion. Or, in other words, that Real, True Christians also imagine they alone possess the Real, True Science.

Here’s the question that Pew itself and CT, et. al., are mangling with their reporting on this survey: “Generally, do you think science and religion are: A) Often in conflict; or B) Mostly compatible.”

And all you need to know about that question is that Ken Ham and all of his fellow “creation scientists” would answer an emphatic “B) Mostly compatible.” Sure, their religious views are in direct conflict with biology, geology, astronomy, physics, and every other scientific discipline that demonstrates we’re living in an ancient universe — but for these folks, none of that counts as real, true science. It’s all the counterfeit conspiracy of false science promoted by the Darwinian cabal and the cult of evolution. Science properly understood, they say, is completely compatible with and supportive of their sectarian young-Earth creationist views.

Nothing in Pew’s survey discourages this kind of self-serving redefinition of “science.”

And that seems to be why “highly religious” church-goers were more likely to respond that “science and religion are mostly compatible.”

I couldn’t find a direct cross-comparison to confirm that the one third of respondents who told Pew that “scientists do not generally agree” with evolution overlaps with the same segment of respondents Pew identifies as “highly religious,” but I’m confident that’s the same bunch because I know those people.

I’m pleased that Pew asked a question like this in their survey: “From what you’ve heard or read, do scientists generally agree that humans evolved over time, or do they not generally agree about this?”

That’s a useful question and an interesting question. But it’s also one of a string of such questions in this survey that seem to encourage respondents to define “science” as whatever they want it to mean. Those questions seek to measure what it is that science means in respondents’ opinion, but they all thus contribute to the notion that “science” is a matter of such opinions. They reinforce the idea that “science” refers to whatever you’d prefer it to mean.

A separate section of questions asks questions about specific scientific matters. One, for example, measures whether or not respondents know that nanotechnology refers to very small things. Another asks whether nails rusting or water boiling is an example of a chemical reaction, while another asks about the function of red blood cells. Responses to those questions are measured and reported as either correct or incorrect, but that’s not how any of the questions about evolution, the age of the universe, or climate change are presented, measured or reported. Those are all, in this survey, matters of opinion for which there can be no correct or incorrect answer.**

Even that question about whether or not “scientists generally agree that humans evolved over time” is treated as a matter of opinion with no correct or incorrect answer. That’s bizarre — particularly since Pew’s own report on its survey supplements that question by citing “trends for comparison” data showing that the vast majority of scientists do, as a matter of objective fact, generally agree that humans evolved over time.

And that, in turn, leads to Pew and Christianity Today and a host of other publications attempting to mislead the rest of us with nonsensical headlines misreporting the meaning of their own wretched survey.

Meanwhile, highly religious white evangelical church-goers continue to demand that the sectarian colleges they send their kids to purge their faculty of any scientist or biblical scholar who doesn’t believe that a historical Adam walked in a historical Eden less than 10,000 years ago. And the leaders of supposedly prestigious white evangelical colleges publicly argue that they’re allowed to redefine human biology because sincere religious belief empowers them to make up their own facts about how contraception works.

Because, you see, “Highly religious Americans are less likely than others to see conflict between faith and science.”

* Christianity Today, please do not forget, is a publication that believes gay and lesbian couples are “destructive to society.”

** This weird refusal to distinguish between matters of fact and matters of opinion also surfaces in an especially conceptually awful question in Pew’s survey. Respondents are asked to choose one of these two binary options:

2. “Public opinion should NOT play an important role to guide policy decisions about scientific issues because those issues are too complex for the average person to understand.”

The way this question is framed and presented likely reinforces respondents’ confusion (and, it seems, the Pew researchers’ own confusion) about the distinction between science itself and “policy decisions” made in response to that science. It’s not clear that either group — respondents or researchers — quite grasps the difference between democratic self-government deciding how to respond to climate change and the notion that the properties of the element carbon are a matter for “public opinion” to decide.

This question, and the rest of the survey, more generally, thus seems to present a false choice between a technocratic dictatorship of scientific philosopher-kings and an idiocracy in which the age of the universe is to be determined by a straw poll of the uninformed.

October 21, 2015
May you dream you are dreaming in a warm, soft bed
Next Post