My sweet embraceable you

“The posable Anton LaVey action figure is back,” Christian Nightmares tells us. And that prompts me to share this, from the appendix to Jon Trott & Mike Hertenstein’s fine book, Selling Satan: The Evangelical Media and the Mike Warnke Scandal:

“What would you like to hear?” The question was addressed to us by America’s Most Famous Satanist. He sat on a swivel chair in his kitchen, surrounded on three sides by triple-decked synthesizer keyboards. Blanche, the “Doctor’s” bleached-blond Boswell, stood nearby, looking like a mobster’s moll. She turned and asked me and my colleague, Jon Trott, if we wanted another cup of Folger’s instant. 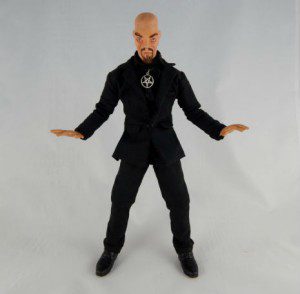 “Sure.” It was getting very late and we’d been talking since dinner. “And, uh,” I said, turning back to LaVey, “how about some Gershwin?”

Anton Szandor LaVey snatched up a songbook off of one of the keyboards in front of him and leaned over the kitchen table to hand it to Blanche. “Read some of those titles for me,” he commanded. Then, turning back to Jon and me, he cooed, “Gershwin wrote so many wonderful songs.”

As Blanche rattled off song titles, LaVey doodled away on two or three of his keyboards at once: “Somebody Loves Me,” “Embraceable You,” even “Rhapsody in Blue.” He changed settings on the synthesizers as he played, fashioning a saxophone sound here, a little bassoon there, reserving a small Casio on the side for the occasional kettle drum roll. A little of the carny organ player was still in evidence.

He finished his medley with a great flourish and looked up. “Gershwin was a good Satanist,” he said.

Trott and Hertenstein couldn’t quite figure out what to make of LaVey, the author of The Satanic Bible and the founder, in the 1960s, of what he called the Church of Satan. But they could tell the old showman was more Barnum than Brimstone. They seem reluctantly fond of him. (LaVey died in 1997, just a few years after he hosted them for dinner.)

The odd account of their cordial, almost old-fashioned evening with LaVey makes for a strange conclusion to their long investigation into the cynical scam perpetrated by Warnke. Both men were sensational self-promoters and entrepreneurs. LaVey, born Howard Stanton Levey, reinvented himself as an occultist and made a living pretending to be a Satan-worshipper. Warnke reinvented himself as an ex-Satan-worshipper and made a living pretending to be an evangelist.

And thus LaVey is, in their book, a more sympathetic figure. Even despite the instant coffee.

In any case, I’m sure he would have loved that action figure. And the Anton LaVey Pez dispenser too.

November 17, 2015 A million sad stories on the side of the road
Recent Comments
0 | Leave a Comment
"I keep having awful migraines and asthma attacks and a sore throat after drinking green ..."
Marja Erwin Postcards from the class & culture ..."
"Conservative white Evangelicalism has become a murder-suicide white nationalist cult.Domestic violence gun homicides are only ..."
Old Man Shadow Postcards from the class & culture ..."
"Word on the street is that the Founding Fathers may have been associated with a ..."
damanoid ‘A man turns his back on ..."
"Sunday update of the Slacktivites Winter Holidays Charity Drive, we're at $123.62! Thank you all ..."
Jessica Ritchey Postcards from the class & culture ..."
Browse Our Archives
get the latest updates from
slacktivist
and the Patheos
Progressive Christian
Channel
POPULAR AT PATHEOS Progressive Christian
1