“Roll Thunder: Well done, Wheaton students,” I wrote back in early December, because I saw a sign of something that had me excited and hopeful.

I hadn’t forgotten about the pattern, but I was hoping that maybe, for once, this time, it might be different. Maybe this bit of genuine good news from a white evangelical institution might, just this once, be allowed to stand. Maybe the gatekeepers were too busy elsewhere to punish this outbreak of virtue.

But that was silly of me. The pattern held. Of course it did. It always does. The Powers That Be in white evangelicalism quickly reasserted their control as Wheaton’s administrators struck back, hard — suspending a tenured professor as a first step toward her termination, and as an effective warning to all of the school’s students and faculty that talk of justice, mercy and such weightier matters would not be tolerated in their community.

So I kept that in mind when I first heard murmurs on Twitter that InterVarsity Christian Fellowship was expressing support for #BlackLivesMatter at their massive Urbana student missions conference. That was encouraging news. InterVarsity has been putting out some pretty good stuff lately about multicultural ministry and diversity, but all in the Nerfed, baby-stepps version of the “racial reconciliation” model. If this respected, mainstream white evangelical group was now going beyond that to a wholehearted endorsement of #BlackLivesMatter, that would be big news.

But after seeing the p;d pattern reinforced and repeated so vigorously just last month, I remained cautious in my optimism.

Then I watched a video of Michelle Higgins’ powerful, remarkable sermon — delivered from the main stage as a main event at Urbana.

That’s extraordinary. I never imagined that I would see a sermon like that preached in a mainstream white evangelical forum like Urbana. Higgins did not mince words or soft-pedal the truth. Her prophetic words on that stage, for that audience, seemed to be, as Tobin Grant described it, “a watershed moment in American evangelicalism.”

I watched that sermon. Twice. Seeing such a “watershed moment” unfolding, I chided myself for being overly cynical.

But then I remembered the pattern. It never allows you to forget about it for long.

And it didn’t take long, at all, for the pattern to reappear and reassert itself. It didn’t take long for me to realize, yet again, that whenever I worry that I’m being overly cynical about white evangelicalism, I’m probably still not being cynical enough.

Michelle Higgins stood in the pulpit at Urbana and said that white evangelicalism was committing spiritual adultery with the false god of white supremacy. She called on white evangelical Christians to repent and be born again — to tear down that false idol and get busy where God is busy, in the movement for justice. 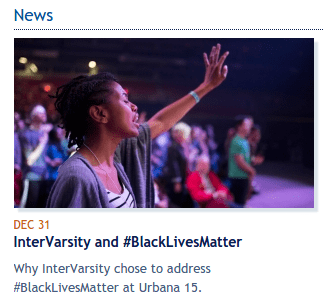 But that’s not what InterVarsity is now saying happened there at Urbana. If you go to InterVarsity’s website, you’ll see that the backpedaling, qualifying and retracting of this prophetic moment has already begun in earnest.

Tobin Grant’s Religion News Service report on Higgins’s sermon is headlined “InterVarsity’s unabashed support for #BlackLivesMatter may be its boldest move yet.” But within days InterVarsity’s leaders were insisting there was absolutely nothing bold or unabashed about it. They’re furiously distancing themselves from #BlackLivesMatter, only mentioning it in the context of an official statement offered as an extremely abashed explanation of “Why InterVarsity chose to address #BlackLivesMatter.”

“Endorsed” changed to “addressed” in the course of a single weekend.

And IV’s official statement apologizing for even “addressing” the movement is a repugnant, sinful mess. It’s a textbook example of quenching the spirit by changing the subject to — what else? — “orthodox doctrine,” the authority of the Bible, and abortion.

I’ll have much more to say about that statement later, but for now just note what’s probably it’s most essential salient feature: It was written for white people — and only for white people.