Yesterday, speaking at a mandatory convocation at Liberty University, Donald Trump once again proved incapable of convincingly posing as an evangelical Christian. His awkward attempts to affirm the signifiers of evangelicalism only served to demonstrate his general lack of familiarity with them.

The example of this that observers had the most fun with was the way he pronounced 2 Corinthians as “Two Corinthians,” rather than the more common “second Corinthians.” Some even suggested this was a game-ending faux pas that would doom Trump’s pursuit of white evangelical votes. 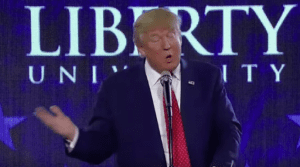 This is a man whose candidacy consists of ethnic slurs, racist slanders, instigating violence against Muslim Americans, a disdain for the Bill of Rights, and contempt for the poor. This is from a philandering casino magnate and slum lord whose public persona is so crude, arrogant and bellicose that he made Spy magazine seem piously moral by comparison. We’re supposed to believe that white evangelical voters happily swallow all of that, but will abruptly abandon the short-fingered vulgarian because he muffed a scripture citation?

Yeah, OK, maybe. That wouldn’t be far out of character for Liberty University-style white evangelicals. And that is pretty clearly what they’ve demonstrated as their priorities: Racism is never a deal-breaker. Misquoting the Bible can be.

Still, though, I think Trump’s awkward, fumbling attempt to quote the Bible was actually a positive for his campaign for this audience. Two reasons:

1. Trump was quoting from 2 Corinthians 3:17, a passage that he quite obviously did not understand or care about other than that it contains the word “liberty.” He was, in other words, prooftexting based on a quick-and-dirty concordance word search. He didn’t care about the context of the surrounding passage, or about the larger theological argument, or about the social, cultural, religious or political context for this verse. He looked up a word, found a verse with that word, and cited that verse as the final word on the subject.

Or, in other words, Trump demonstrated that he perfectly understands the hermeneutic of white evangelicalism. He reads and interprets the Bible exactly the same way they do.

2. Donald Trump was speaking to an audience of mostly white evangelical undergraduates. Less than four years ago, these kids were in white evangelical or fundamentalist church youth groups. So Trump’s cringe-inducing botched attempt to pander to their culture would be, for these kids, comfortably familiar.

Think about it. Trump was up there trying to convince this audience that he was one of them — just like their former youth ministers, and all the many guest speakers at youth group, had done all through high school. And just like those youth ministers, Trump garbled the lingo, embarrassed himself by using insider-slang he only half-understood, and generally came across as someone who desperately wanted to be liked by a roomful of young people he didn’t understand.

For kids who grew up in church youth group, that’s like going home.

Ultimately, though, none of this subcultural subtext matters. Trump’s Bible-polishing was met with a shuffling silence, but he shifted to his standard talking points — military bluster, rights for whites, lower taxes, etc. — and the audience cheered.

Is Donald Trump evangelical enough for white evangelicals? No. But he’s white enough — and for them, that’s what’s most important.

Trump’s candidacy will prove clarifying. The Republican Party has relied on “values voters” for decades without, in their view, faithfully representing their interests. As Falwell put it in his introduction of Trump: “For decades, conservatives and evangelicals have chosen the political candidates who have told us what we wanted to hear on social, religious, and political issues, only to be betrayed by these same candidates after they were elected.” In Trump, these voters see someone who shares their true priorities.