The 15th anniversary of Cam-Cam

It’s Groundhog Day, so cinema-wise today really belongs to an enduring American classic and one of the most rewarding spiritual parables ever committed to film. We’re not here to talk about that movie, except to say this: Practice, practice, practice. And to recommend re-watching it as a helpful tonic should you ever make the mistake of watching the movie we are here to talk about.

And that movie — released 15 years ago this very day — is Left Behind: The Movie, starring Kirk Cameron.

Joe Reid reminds us of why today will live in infamy in a Decider piece titled “Left Behind Turns 15: What’s the Legacy of Kirk Cameron’s Rapture?” 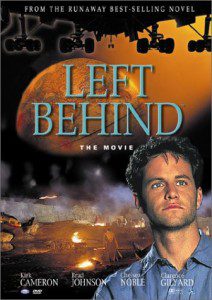 Reid’s assessment shows he’s not really familiar with the novel the 2001 movie is based on, which likely means he’s leading a richer, happier life than those of us who have read it. Reid stumbles a bit in points — such as when he suggests that the Nic Cage remake featured Cage reprising Cameron’s role as Cameron Williams (rookie mistake). He also repeats the common mistake of taking Left Behind at its word when it purports to be based on anything the Bible actually teaches.

I think Reid also is unfair to poor Gordon Currie, whose campy turn as Antichrist Nicolae Carpathia is probably the most entertaining thing in all of Left Behind: The Movie. Reid notes that Currie once played cousin Bobby in an episode of Beverly Hills 90210. He was also once the roommate of a then-also-unknown fellow actor named Brad Pitt. The poor guy’s IMDb listing peters out post-Left Behind, which seems cruelly unfair. I’d like to see Brad use his clout to get his old flatmate a shot at something better.

On a lesser point, Reid also dismisses the also-now-15-years-old Head Over Heels as a “Freddie Prinze Jr. romantic disaster.” That’s just plain wrong. It’s actually a charming little Monica Potter romantic thriller. Potter plays an innocent woman who gets embroiled in an international scheme, so of course I’m going to defend this movie. Prinze plays the part of what would be, in the usual versions of this trope, the Mysterious Woman. This gender-reversal of the usual version of this story isn’t novel — Margaret Lockwood got there first in 1938 in Hitchcock’s The Lady Vanishes (which you can, and should, watch online for free). And Head Over Heels stumbles toward the end when it conspires to have Potter rescued from distress by male-savior Prinze. But still, Potter is endearing and it’s a harmless little cookie that’s mostly sweet and tasty, if not altogether nutritious.

Anyway, those quibbles aside, the main point here is what Reid gets very, very right about Left Behind, particularly these two points:

The whole crux of the Left Behind mythology is that when the Rapture comes, the Antichrist … will actually emerge from the bosom of the United Nations, that most reliable of right-wing boogeymen. This places Left Behind right at the center of a whole confluence of conspiracy theories. Of this Salon list of 10 right-wing conspiracy theories that have crept into American politics, at least six of them can be found in the Left Behind universe, most of them involving the U.N. and globalization (at one point, a shadowy informant agitatedly tells Cameron’s character that a plot to create one world currency is at the heart of the conspiracy).

World Peace Is A Trick

Speaking of conspiracy theories, the other main tenet of Left Behind is that promises of world peace are merely the beginning of a seven-year reign of evil, before God comes and saves us.

Yes. When the first Left Behind novel was published in 1995, the John Birch Society was an irrelevant fossil, a relic of an earlier generation of paranoia long-banished to the fringes of the far-right fever swamp. It’s ravings were condemned and rejected by every respectable conservative politician and publication. Today we have the tea party movement and a Republican Party that includes a huge Breitbart/WorldNet Daily faction. The John Birch Society itself has been welcomed back into the fold and candidates who embrace its incoherent delirium — Ted Cruz, Donald Trump — are currently the leading contenders for the Republican nomination for president.

I’m not suggesting that Left Behind is solely responsible for this change. Other, larger factors have also played a role — Fox News, the Internet, the proliferation of Limbaugh-inspired talk radio, etc. But the simple fact is that in 1994, Bircher fantasies were not welcome in Republican politics. Then, over the following decade, Tim LaHaye published a series of books devoted to teaching and spreading those fantasies — books that became phenomenal best-sellers read by tens of millions of Americans. Today, LaHaye’s Bircher ideology is a serious factor in our national politics and may prove to be a decisive factor in the election of our next president.

Just consider the increasingly urgent matter of climate change. The current state of American politics regarding that issue cannot be explained by simple partisan polarization. Yes, in our two-party system, every issue tends to devolve into a two-sided debate, but we’ve ended up in a far stranger place than that dynamic alone could explain. Partisan polarization might have given us an ongoing political battle over how to respond to climate change — whether through the market-driven mechanisms once preferred by Republicans or through the more aggressively regulatory approach favored by Democrats.

But Republicans today are not arguing for small-government, market-driven efforts to mitigate and prepare for climate change. Republicans — almost uniformly and unanimously in congressional and presidential politics — are instead dismissing the facts of climate science entirely as a hoax or a conspiracy. This is utterly bonkers — a form of madness that only makes “sense” if one accepts the paranoid conspiracy framework of Left Behind. When Sen. James Inhofe dismisses climate change as a “hoax,” he never explicitly states who it is that supposedly is orchestrating this worldwide, massive conspiracy. He doesn’t need to say it explicitly. Everyone knows. It’s Nicolae Carpathia — the Antichrist

Inhofe, by the way, is now campaigning on behalf of Sen. Marco Rubio (R-Atlantis) — a candidate who supposedly represents the mainstream of the Republican establishment.

February 3, 2016 When white supremacy is 'conservative' (and vice versa)
Recent Comments
0 | Leave a Comment
"I thought the Sci-Fi miniseries did rather well.But, that's just it. It was a miniseries ..."
WingedBeast A two-year-old post that aged uncannily ..."
"I the UK we currently have a Conservative Government. Conservative governments really, really, REALLY do ..."
Stone_Monkey A two-year-old post that aged uncannily ..."
"Is she talking about in the original Hebrew? Because, I don't know enough to know ..."
WingedBeast A two-year-old post that aged uncannily ..."
"huh, Cruella De Vil is real."
Seed of Bismuth Jesus on the mainline
Browse Our Archives
get the latest from
slacktivist
Sign up for our newsletter
POPULAR AT PATHEOS Progressive Christian
1