I do not care for primary season

I do not care for primary season February 9, 2016 Fred Clark

I am not a fan of presidential primary season.

This may be partly due to my being a Jersey guy who then moved to Pennsylvania. Both states have primaries so late in the process that the race has almost always been settled by the time we get around to voting, so for us primaries tend to be sort of an opportunity to register our opinion after the fact. I’ve voted in primaries from 1988 (for Jesse) through 2008 (for Obama), but I don’t think I’ve ever cast a primary vote that still mattered by the time my state went to the polls.

Mainly, though, my problem with primaries is that elections tend to get silly, and counter-productive, when the difference between candidates isn’t as stark. This is something that we can see most clearly in presidential primary debates.

I like presidential debates for the national race — debates between the nominees of the two parties. They often go off the rails with dumb questions, evasive answers, and media spin that focuses on irrelevant verbal tics or mannerisms — all the many things that can make a debate less than edifying and useful. But the basic idea of those debates is good: Two candidates with opposing ideas square off to defend their opposing views about policy, programs and priorities.

In primary debates, though, you wind up with two — or many more — candidates who can’t really square off because they mostly agree about policy, programs and priorities. And when the opposing candidates aren’t really opposed on those substantial matters, the debate — and the rest of the campaign — shifts its focus to less substantial matters. The debate and the campaign become an illustration of Freud’s idea of the narcissism of small differences. The process requires mountains, so it makes mountains out of molehills.

And that’s actually the best-case scenario. What tends to happen more often is that, in the absence of major differences on policy, programs or priorities, a primary shifts its focus to purity.

The overcrowded Republican primary campaign for 2016 is a good illustration of what I mean by that. Much of that campaign has nominally focused on the matter of immigration. That focus is strange when you consider that nearly all* of the 17 candidates seeking the Republican nomination agreed on this subject. There has been some disagreement on the priority of the issue, but with regard to the substance of what they believed the policy and law ought to be, the candidates are basically unanimous. (In my view, they are unanimously wrong, repugnantly so, but that’s a separate complaint.)

It would have been useful and constructive — for Republican primary voters and for our democracy in general — if the campaign could have acknowledged that unanimity and, therefore, moved on either to other topics on which there might be more substantial disagreements and distinctions between the candidates, or else shifted focus to the question of where this issue ought to rank among the priorities of the next president.

But that’s not what happened. That almost never happens in primary elections. What happens, instead, is that given the field’s unanimity on the substance of policy, the debate and the campaign becomes about their respective purity — or lack thereof — with regard to this agreed-upon orthodoxy. And this focus on purity is almost always meaningless, pointless, and insubstantial.

Purity disputes are where primary candidates get into heated back-and-forths over votes cast or speeches given many years ago. Those past votes and words are cast in the worst possible light by opponents, the political context and particularities of the time in which they occurred are disregarded, and a bunch of candidates who unanimously agree about immigration angrily pretend that their opponents don’t really agree 100-percent, because seven years ago they once said something vaguely qualified or cast a vote for a half-measure that wasn’t 100-percent pure according to the now-current standard of purity on the issue.

Purity disputes, thus, are largely play-acting and pretense. As a result, we’ve now witnessed more than six months of Republican campaign “debate” nominally focused on immigration, but actually focused on accusations and counter-accusations aimed at portraying opponents as failing to maintain a perfect score of adherence to what they’ve all actually agreed is the only acceptable approach and goal for immigration policy. They’re not debating different views. They’re arguing over who is the purest representative of a single view.

That dynamic encourages candidates to push the agreed-upon orthodoxy in an ever-more extreme direction. Once it’s established that everyone agrees, the purity debate starts in an attempt to show that opponents’ don’t really agree 100-percent. And as that purity argument heats up — with everyone angrily demanding that their 100-percent purity be recognized, the next step is for candidates to try to start differentiating themselves by declaring 110-percent or 120-percent agreement. I’ll see your mass-deportation and raise you a coast-to-coast Great Wall of Trump, etc.**

Fnyeh. This is not useful for Republican primary voters and it’s unhealthy for democracy as a whole. Among other things, this tendency for primary campaigns to devolve into purity disputes also makes compromise and negotiation more difficult for anyone in either party to pursue or achieve. Support anything that carries a whiff of anything less than total victory with unconditional surrender and you’re providing fodder for a future primary attack against your 100-percent purity. 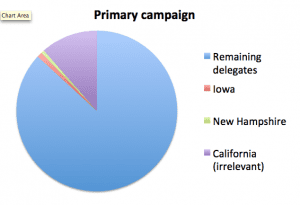 My other complaint about primary elections has to do with the nature of the game itself. In theory, primary campaigns are a democratic process (sometimes more, sometimes less democratic) in which candidates strive to win the support of delegates. And it takes a lot of delegates to win the nomination — something like 4,800 on the Democratic side in 2016. Iowa and New Hampshire are fairly sparsely populated, and thus supply a total of only 84 delegates between them. Here in Pennsylvania, we have more than 200 delegates, but our votes have never counted as much as the votes of those in Iowa and New Hampshire. Why?

Well, because the early primaries provide candidates with “momentum.” What does that mean, exactly? Well, mumble mumble mumble. This “momentum” shapes and defines the primary race every four years, so it must mean something, right? But why should it and how does it?

Momentum, I think — Iowa and New Hampshire — refers mainly to two things. And the significance of Iowa and New Hampshire, despite the measly number of actual votes at stake in those races, shows that those two things matter more in primaries than our votes matter. Momentum means a media narrative and it means a corresponding influx of money. And neither one really has much to do with reflecting the interests or choices of voters.

If the primaries were really a democratic contest for voters, then the votes of the people in Maryland (118 delegates) would count at least as much as the votes of the people in Iowa and New Hampshire (84 delegates combined). But they never do, and that stinks. The whole thing strikes me as a bunch of people looking at a 6-2 first-quarter basketball score and declaring one team the pre-emptive winner.

That’s absurd even before you realize that half the time the team they declare the winner is the one with only 2 points, because they scored the last basket and therefore have “momentum.”

* The exception, I think, is Jeb(!) Bush, who still seems to advocate some path to citizenship along the lines of the comprehensive immigration reform that many Republicans publicly favored as recently as his brother’s administration and that the 2012 post-election GOP “post-mortem” endorsed as an approach that might broaden the party’s appeal.

Alas for Jeb, the Republican base of primary voters hates this idea, and so he’s barely spoken up to distinguish himself from the field by asserting and defending his substantial distinctive on the issue.

Plus, and more importantly, it turns out that Jeb Bush is Very Bad at running for president — so Very Bad at it that he seems to have convinced GOP voters that he’d be just as bad at actually being president. I don’t know that even a preternaturally skilled campaigner could, at this point in history, overcome and redeem the last name Bush, but poor Jeb seems utterly incapable of doing so.

** The effect of purity disputes in primary races is something like watching a bunch of used-car salesmen arguing over who’s best at haggling with customers.

“Oh, yeah? Well I’ll get an even better price for that Civic because my starting ask will be $10 million.”

The fact that these increasingly absurd prices will make it nearly impossible for any of these people to ever sell any cars does nothing to deter their insistence that citing ever-higher standards of purity corresponds to their being ever-tougher negotiators. And it doesn’t help that horse-race election “journalism” plays along with that pretense.

Eric Cantor and Mike Castle are out of office today because they sold too many cars — proof to GOP primary voters that neither of them understood how to drive a proper bargain.