Ben Carson does not understand subsidiarity

“We are caught in an inescapable network of mutuality,
tied in a single garment of destiny.
Whatever affects one directly, affects all indirectly.”
— Letter From a Birmingham Jail

JESSICA FULLER, PARTICIPANT: Dr. Carson, how do you reconcile the differences between traditional Christian values, specifically caring the least of these, and current GOP stances on social issues such as welfare and subsidies for the poor?

CARSON:  Well, when you say current GOP, I’m a part of the GOP and let me tell you what my stance is. My stance is that, we the people have the responsibility to take care of the indigent in our society. It’s not the government’s job. You can read the Constitution all you want, it never says that it is the government’s job and I think where we’ve gotten confused.

You remember: “We the People of the United States, in Order to form a more perfect Union, establish Justice, insure domestic Tranquility, provide for the common defence, promote the general Welfare, and secure the Blessings of Liberty to ourselves and our Posterity, do ordain and establish this Constitution for the United States of America.” 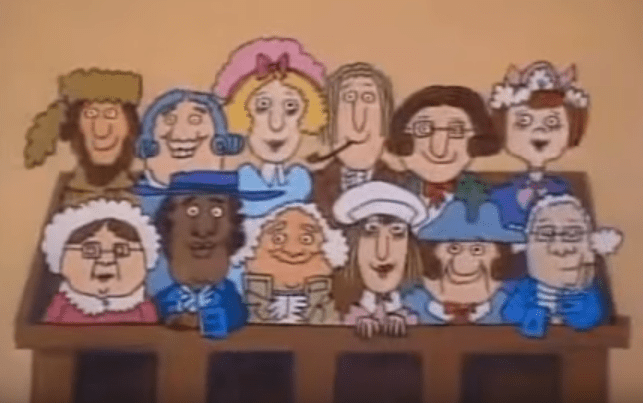 The Constitution won’t allow for Carson’s separation of “we the people” versus “the government.” And it says right there in the Preamble the our function as our own government explicitly includes promoting the common good — the “general welfare” — and ensuring the “blessings of liberty” for every last one of us.

But I’m afraid Carson’s answer only gets worse from there, starting with a “history” lesson based, apparently, on Carson once having seen a handful of Little House on the Prairie re-runs:

CARSON: In the old days of America when communities were separated by hundreds of miles, why were they able to thrive?  Because if it was harvest time and the farmer was up in the tree picking apples and fell down and broke his leg, everybody pitched in and harvested his crops for him.  If somebody got killed by a bear, everybody took care of their family.

So we have a history a taking care of each other.  Now, for some strange reason starting sort of in the 20’s with Woodrow Wilson, the government started getting involved in everything. …

Ever heard of Abraham Lincoln? Or how about the 19th century — ever heard of that? Because apparently Ben Carson never has. For him, American history starts with some idealized 18th-century agrarian kibbutz and then skips directly to Woodrow Wilson’s presidency in the 1920s (which was actually not in the ’20s, but let that pass).

Skipping over Lincoln and the rewriting of the Constitution following the Civil War has weirdly become Republican orthodoxy nowadays.* That’s as profoundly misleading as citing the Articles of Confederation as though they were still binding for our government. And so Carson is profoundly misled, arguing that Wilson betrayed the clear principles of our Founding Fathers like President Hanson and President Boudinot.

CARSON: Now for some strange reason, starting sort of in the ’20s with Woodrow Wilson, the government started getting involved in everything.  It kept growing, metastasizing.  By the time we got to the ’60s, LBJ was saying, we, the government, are going to eliminate poverty.

Now how did that work out?  You know, $19 trillion later, 10 times more people on food stamps, more poverty, more welfare, broken homes, out-of-wedlock births, crime, incarceration.  Everything is not only worse, it’s much worse.

This is, frankly, half deliberate dishonesty and half batshit ignorance. Carson is making up numbers and ignoring facts. When this crap flows from the mouth of a more sophisticated liar, it’s worth responding in detail, but Carson can’t even be bothered to offer a plausible-sounding right-wing revisionism.

And this is particularly disgraceful coming from a medical doctor — a man who knows firsthand how Medicare benefits older Americans, keeping them from being impoverished by aging and disease. For decades this man has deposited Medicare money into his personal bank account, but here he is saying that the Great Society programs made “everything … much worse.” Disgusting.

But Carson’s odious regurgitation of hateful lies isn’t what’s interesting here. The really interesting bit comes next, when Carson’s rambling answer meanders closer to the foundation of Christian social teaching that has so far eluded him. And then, just when he seems about to grasp it, he trips over his own feet and falls on his face.

CARSON: And that’s because it’s not their job. It’s our job. I wish the government would read the Constitution. I think that would probably help quite a bit. And maybe they did read it and maybe they got confused when they read the preamble which says one of the duties is to promote the general welfare.

They probably thought that meant putting everybody on welfare. But in fact … I don’t think it means that at all. And what we need to do is level the playing field.

I wish we’d gotten a follow-up question here so that we could have pressed Carson to explain what it is he thinks “promote the general welfare” does mean. He never says, and it’s impossible to imagine what he might think it could mean beyond some sort of vapid, contentless platitude.

All he seems sure of there is that the “general welfare” and the blessing of Liberty don’t have anything to do with poverty. For Carson, apparently, an impoverished nation might still be enjoying a state of general welfare. And “justice” too, apparently. He thinks poverty has nothing to do with that either. (“Sorry all your kids are starving, Mrs. Joad, but at least you’ve still got your general welfare and you can sit back and enjoy your justice and tranquility.”)

It might also have been interesting for a follow-up question regarding what Carson means by “level the playing field.” That might have confirmed what’s already quite clear: Ben Carson has no idea what he means by that.

CARSON: But the government can play a very important role in facilitating what we, the people, do. …

So close. So tantalizingly close. I mean, yes, Carson still weirdly insists on a binary chasm separating “the government” from “We, the people,” and that’s stupidly un-democratic and anti-democratic and just basically incoherent. But here, at least, he seems to be grasping toward some vague notion of mutuality — that in some way his imagined monarchy and the rest of society might have some shared interests and might in some way be connected and be able to work together across his imagined chasm.

But then he quickly retreats. “Let me give you one quick example,” he says. And his example has nothing to do with government facilitating private charity. It is, rather, an argument for a more comprehensive private charity — one that could, expansively and expensively, play an even larger role in replacing collective public action.

CARSON: Let me give you one quick example.

But usually their education stops when they have that baby.  Now if you not only support them through that pregnancy, but now provide childcare for them so they can go back to school and get their GED or their associate’s degree or bachelor’s degree or their master’s degree, learn how to take care of themselves, teach their baby how to take care of themselves so that you break the cycle of the dependency.

And Ben Carson wants babies “to take care of themselves.” Rugged individualism in diapers. (Diapers that these liberty-loving babies will, of course, change for themselves lest they be caught in the “cycle of dependency.”)

The key to understanding his confusion here is that Carson has no idea who the antecedent is for “you” in “Now if you only support them …” and thus has no idea who it is who is then being asked to “provide childcare.” Is this government? If so, Carson is contradicting himself by calling for a revival of Great Society programs, picking up where LBJ left off. Is this private charity? If so, this doesn’t work as an example of government “facilitating” private charity in pursuit of the general welfare.

Undefined, undifferentiated pronouns are always the hallmark of someone who doesn’t understand subsidiarity. Define and differentiate those antecedents and you begin to appreciate the inescapable necessity of subsidiarity, the bonds of mutuality and the direct and indirect functions that all have in relationship to all.

CARSON: That’s the only way we’re going to get through these programs. That is true compassion. Having people become dependent on others is not compassion at all.

One-way dependency is, indeed, a paternalistic perversion of “true compassion.” But Carson veers off into his babies-taking-care-of-themselves absurdity by denouncing anyone being dependent on anyone else. This is Carson’s idea of independence — every man is an island. He wants to rewrite the Constitution so that it begins, “I, a person.”

The truth is this: Everyone is dependent on everyone else. This has nothing to do with some supererogatory “compassion.” This is simply the essence of the human condition.

We are caught in an escapable network of mutuality. We are all connected, all dependent on one another.

* It’s as if the Republican Party is most ashamed of the legacy they should be most proud of. It’s like hearing Paul McCartney trash the Beatles and Wings while insisting he should be judged only by his late-career solo work.

The party of Lincoln gave us a strong federal government. It gave us the 13th, 14th and 15th Amendments, federalizing the Constitution and reinventing America by introducing things like public education. Today, if you hear a politician demanding the repeal of the 14th Amendment or railing against the evils of public education, you don’t need to check to see if there’s an R by their name — you know it’s a Republican talking. Modern Republicans all talk like Calhoun and act like John Wilkes Booth — eager to end Lincoln’s supposed federal tyranny. Weird.

February 21, 2016 Subsidiarity is really important, whether or not you call it that
Recent Comments
0 | Leave a Comment
Browse Our Archives
get the latest from
slacktivist
Sign up for our newsletter
POPULAR AT PATHEOS Progressive Christian
1