The International Order of St. Hubertus

When Supreme Court Justice Antonin Scalia died 12 days ago at a West Texas ranch, he was among high-ranking members of an exclusive fraternity for hunters called the International Order of St. Hubertus, an Austrian society that dates back to the 1600s.

After Scalia’s death Feb. 13, the names of the 35 other guests at the remote resort, along with details about Scalia’s connection to the hunters, have remained largely unknown. A review of public records shows that some of the men who were with Scalia at the ranch are connected through the International Order of St. Hubertus, whose members gathered at least once before at the same ranch for a celebratory weekend.

Members of the worldwide, male-only society wear dark-green robesemblazoned with a large cross and the motto “Deum Diligite Animalia Diligentes,” which means “Honoring God by honoring His creatures,” according to the group’s website. Some hold titles, such as Grand Master, Prior and Knight Grand Officer. The Order’s name is in honor of Hubert, the patron saint of hunters and fishermen.

… The society’s U.S. chapter launched in 1966 at the famous Bohemian Club in San Francisco, which is associated with the all-male Bohemian Grove — one of the most well-known secret societies in the country.

The Washington Post’s headline there is ambiguous, so let’s clear up what that means. This is not a fraternity for “elite hunters” — not a club that welcomes the most highly skilled hunters in the world. It is, rather, a fraternity for men who are economic elites and who also enjoy hunting.* It’s a boys-only Davos with long guns.

The Davos example is, I think, the best way to understand groups like this, and to think about what’s “secret” in such secret societies. Consider, for example, the Freemasons — who may be, oxymoronically, the best-known secret society. They meet in Masonic halls with big, public signs identifying them as such. And Masons themselves are not secretive about their membership in this secret society. They wear rings and often even get special license plates identifying them as members. They’re on Facebook. For members of a secret society, they’re remarkably open about it.

But the Freemasons also meet privately, in gatherings closed off from the rest of the public. Those “secret” meetings don’t strike most of us as nefarious because we know enough about similar gatherings of similar “societies” to have a pretty good idea of what goes on in such club meetings. I’ve been to Rotary luncheons with my dad. I’ve had friends who coached Little League for the Elks Lodge. I myself spent several years as a member of the South Philly Fast-pitch Softball League. So the Masons don’t worry me.

The Masons, though, are older and spookier than the Elks or the Rotarians. Those more recent middle-American civic clubs are not “secret societies” in the way the Freemasons are, with all the weird trappings and accoutrements of robes and Latin phrases and rumored rituals performed behind locked doors of which they may never speak outside. The forced pageantry of such rituals usually turns out to be rather silly or embarrassing (just ask David Cameron), but the idea of them is what gives secret societies their intriguing allure — both for members and for outsiders. 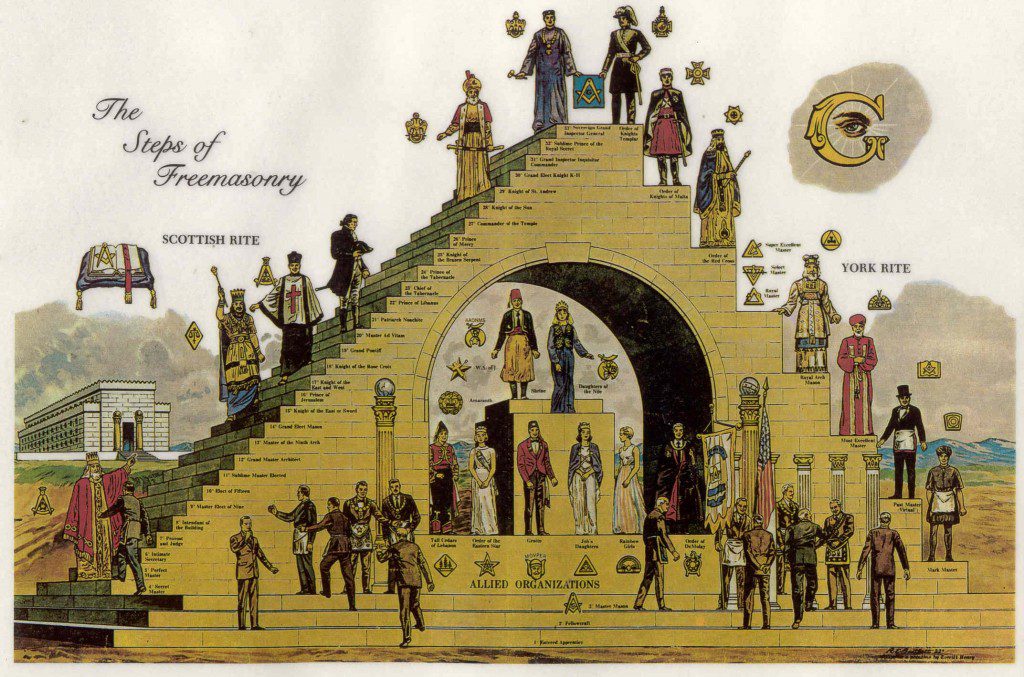 That’s why we’re fascinated by the weirder ritualistic details in this story about Scalia’s membership in the pretentiously titled International Order of St. Hubertus — by what Anil Dash yesterday aptly referred to as the creepily “Eyes Wide Shut s–t” in this story. (Bohemian Grove!) This forced mysteriousness has long provided fodder for the fantasies of opponents of such secret societies, but it’s a distraction from the real reasons we should be concerned about such groups.

Yes, the green-robed business is creepy and maybe makes you wonder if The Most Dangerous Game wasn’t actually a whistle-blowing memoir written to expose the initiation rite of its secretive leadership. But the truly creepy bit here doesn’t have anything to do with whatever secret rituals or whatnot these men engage in during the LARPing portions of their gatherings. The creepy part is what we know because they tell us: Some of the most powerful, wealthiest, whitest, Gentile males in the world regularly gather at luxury hunting lodges for a little bit of hunting and a whole lot of networking. This is one of the many unofficial channels through which they run the world.

These white men have a club and 99.99 percent of the world is not rich or powerful or white enough to belong to it. You will never be invited, or allowed, to join. Members of this club assist one another, promoting one another’s interests and working together to quash any potential source of discomfort or misfortune. That’s not the secret part, but that’s the scary part.**

Consider this: In 2004, the Supreme Court agreed to hear a case involving an attempt to make public the documents of a government energy task force headed by Vice President Dick Cheney. This didn’t involve any robes and rituals, but it did involve the Bush Administration arguing that its energy policy needed to be kept secret, and that the public had no right to know about the involvement of oil and coal companies in writing that policy. Three weeks after the Supreme Court agreed to hear the case — Cheney vs. USDC for District of Columbia — Dick Cheney went on a luxury hunting trip with fellow “elite hunter” Justice Antonin Scalia. Scalia refused to recuse himself from Cheney’s case, and eventually sided with the majority in favor of Dick Cheney.

That’s not a secret conspiracy. It’s just how they do things. And it’s how they ensure that this is how things will always be done.

* I suppose the other possible meaning of “secretive society of elite hunters” would be some kind of revolutionary guild of shadowy figures who hunt elites. I smell a movie franchise here.

** I’m reminded again of a conversation with pastor/activist Gene Rivers after he returned from a gathering of the Aspen Institute — a think-tank network for economic elites that convenes at a luxury campus in Colorado. He’d been invited to participate in a panel on the Ten-Point Coalition, but stuck around for the rest of the gathering. And he said it terrified him. These were powerful people, he said, who gathered to envision and plan for the future. But in their vision of the future, there were no black people. They simply did not exist.

February 24, 2016
Donald Trump as Cyrus the Great
Next Post