Two of my favorite bloggers — Atrios and John Cole — have both written recently about the U.S. intervention in Libya’s civil war at the end of Gaddafi’s long reign there. They’re angry about that, and they’re not wrong. Here’s Atrios’ summary:

The humanitarian interventionist liberals informed me that we had to bomb the shit out of the country in order to save the poor people of Libya from the tyranny of the guy we supported 10 days ago, and that not wanting to bomb the shit out of them made me a bad person. Predictably, everything went to hell in Libya, and humanitarian concerns magically disappeared as well. Where are the impassioned pleas for aid? They seem to be missing from the blogs and newspaper columns.

I completely agree with him about the hypocrisy of “humanitarian interventionist liberals,” whose humanitarianism always seems to begin and end with military action. Thus, for example, they’ll enthusiastically endorse “saving” the people of Syria and Iraq from ISIS when that involves drone strikes and freedom bombs, but they lose enthusiasm for the project when it involves helping to resettle the millions of victims displaced by Assad, ISIS, and our own bombing. If the horrors of the regional Syrian conflict call for humanitarian intervention — and I think they do — then arms sales and bombing runs shouldn’t be the first or the last form of that intervention. Far more urgent would be providing massive support to the U.N., Turkey, Jordan, Greece, and the other neighboring nations now struggling to harbor hundreds of thousands of refugees fleeing that conflict.

Here’s the UNHCR on the situation in Turkey:

Since the Syrian crisis began in 2011, Turkey — estimated to host over one million Syrians — has maintained an emergency response of a consistently high standard and declared a temporary protection regime, ensuring non-refoulement [not returning persecuted people into the hands of their persecutors] and assistance in 22 camps, where an estimated 217,000 people are staying. Turkey is currently constructing two additional camps.

… The number of refugees and asylum-seekers in Turkey in 2015 is expected to rise to nearly 1.9 million, including 1.7 million Syrian refugees.

Somehow, though, we always manage to drum up support for getting involved with bombs while we never muster the same support for just writing the desperately necessary checks. (Which would actually be less expensive, because those bombs aren’t cheap.)

Given all of that, I understand where John and Atrios are coming from in their frustration with the intervention in Libya.

But regardless of what “humanitarian interventionist liberal” bloggers or op-ed columnists might have had to say in their enthusiasm for humanitarian bombing, I don’t think that’s really the main reason the Obama administration made this decision to go ahead with this military intervention.

Libya was about Rwanda.

In a few short months in 1994 — between April and mid-July — 800,000 to a million Rwandans were slaughtered in a genocidal civil war. The horror unfolded suddenly and swiftly, and the U.S., like the rest of the “international community,” was unable or unwilling to respond. We were bystanders, all of us. Those who had the resources to intervene did not do so.

I strongly recommend Philip Gourevitch’s stunning history of Rwanda in 1994, We Wish to Inform You That Tomorrow We Will Be Killed With Our Families. The title of that book comes from a letter written by several Seventh-day Adventist pastors who had taken refuge in an Adventist hospital with hundreds of other Tutsis fleeing the genocidaires. They and their families were, in fact, killed the next day. (The recipient of their letter, a church official, was later convicted of facilitating their slaughter.)

For a crash-course introduction, you could also see Terry George’s Hotel Rwanda, which tells the true story of hotel manager Paul Rusesabagina’s shrewd, desperate efforts to save the lives of more than a thousand refugees in a luxury hotel. (It’s streaming on Netflix right now.) 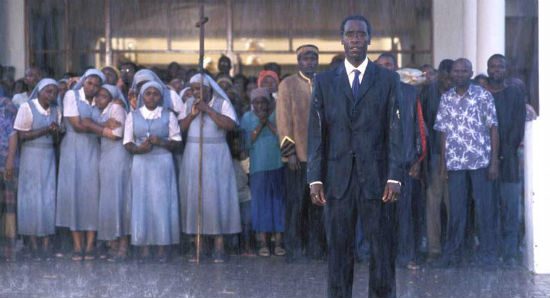 The horror of 1994 in Rwanda, and the American and international failure to respond before it was too late, was a huge factor in the Obama administration’s decision to intervene in Libya 17 years later. Hillary Clinton, secretary of state in 2011, had been living in the White House in 1994. Obama’s ambassador to the United Nations, Susan Rice, was a member of the Clinton administration’s National Security Council, serving as director for international organizations and peacekeeping in 1994. In 2011, Samantha Power was a special assistant to the president and part of Obama’s NSC staff. Back in 1994, Power had been a journalist in the former Yugoslavia, an eyewitness reporter on the atrocities and ethnic cleansing in the region who went on to write a book on the subject, “A Problem From Hell”: America and the Age of Genocide.

For all of these advisers and decision-makers in the Obama administration, Rwanda was the lens through which they viewed the situation in Libya in the fall of 2011. Longtime dictator Muammar Gaddafi was — like Assad in Syria — preparing to crush the armed rebellion against him that had arisen from the protests of the Arab Spring. He didn’t have an army of genocidaires armed with machetes, but he had an air force capable of producing the same result, and he had made it clear that it was his intent to do so. President Obama — encouraged and supported by Clinton, Rice, and Power — chose to intervene militarily, grounding Gaddafi’s air force and preventing that slaughter.

None of that excuses Obama et. al. from responsibility for the consequences — intended (the mass-slaughter was, in fact, averted) and unintended (chaos and civil war continue in Libya) — of that decision to intervene. Nor does their Rwanda frame of reference automatically justify anything. “America should have done something about Rwanda” is a true statement, but it’s not a magical free pass that allows one to argue that “America should do anything” and to have that anything celebrated as blessed and good because at least something was done.

But any honest discussion of Obama’s intervention in Libya needs to recognize that this wasn’t akin to the neoconservative adventurism that led to the disastrous quagmires of Afghanistan and Iraq. This wasn’t about promoting democracy, or nation-building, peance and freeance, being greeted as liberators, purple fingers or painting schools. Nor does this fit neatly into any of the necessary critiques of American imperialism and American militarism. This was about Rwanda. (And, to a lesser extent, about Bosnia.)

“Humanitarian intervention” has come to be shorthand for the idea that we can fix the world’s problems with freedom bombs. But Libya in 2011 wasn’t an attempt to fix anything; it was a limited effort intended to prevent a specific worse thing from happening. The intent and the execution of that weren’t driven by what we usually mean when we speak of American imperialism. The idea — in both intent and execution — was more along the lines of “If I Had a Rocket Launcher“:

“Rocket Launcher” is, of course, an anti-imperialist anthem. Cockburn’s anger is in response to the genocide in Guatemala, which claimed the lives of some 200,000 people from 1981-1983. No one looks back on that horror the way we look back on Rwanda, wondering why America just stood by without doing something. Because, in the 1980s in Guatemala, the administration of President Ronald Reagan wasn’t just standing by — it was doing something. The Reagan administration was fueling, funding, arming and encouraging the Guatemalan genocide. Those helicopters Cockburn sings about were our tax dollars at work.

Feel free to criticize Obama’s intervention in Libya as ill-conceived, or poorly executed, unwise, unhelpful, unimaginatively violent, etc. And if you’re arguing that America would be better off “intervening” with humanitarian aid and by writing big fat checks for something other than more bombs, I’m right there with you.

* And because we’ve made the decision to spend astonishing amounts of that money developing and purchasing bombs, rather than on, say, health care, education, a world-class VA system, clean energy, universal broadband, lead-free water systems, food inspection, high-speed rail, guaranteed employment, day care, medical research, a post-office banking system, computerizing the IRS, relocating Miami, the Diaper Fund, a revolving loan fund to turn every manufactured home park into a resident-owned community, a lunar colony, or any of the other Nice Things we could have, but don’t have, because we’ve decided to devote more than half of our federal discretionary budget to military funding.