Buck slipped off to Frankfurt after escaping London, where the same menacing forces of the global shadow-government that had killed his friend Dirk had tried to kill Buck by planting a bomb in a police car. He narrowly escaped but a Scotland Yard inspector named Alan Tompkins was blown to kingdom come.

Buck is traveling under the name “George Oreskovich,” a false identity he uses whenever he goes incognito while hoping his enemies think he’s dead from their unsuccessful bombing attempt. (The name just sort of came to writer Jerry Jenkins in June of ’93.) Buck’s undercover persona is “a naturalized Englishman from Poland.”

So, this Polish Brit with an American accent and a Croatian name checks into a hotel in Germany. He wants his frighteningly powerful enemies in the international conspiracy to think he’s dead, at least until he gets back to New York. So Buck knows he mustn’t do anything to make them think otherwise.

He started by finding a pay phone in the lobby and dialing his father’s number in Arizona.

It could be worse, I suppose. He could have dialed the operator and asked to place a collect call from “the very much alive Cameron Williams in the lobby of the Hotel Frankfurt.”

He tells his dad not to worry if he hears something about him dying in a car bombing. “I just want you to know I’m all right,” he says. “All right” here meaning “an all-powerful international conspiracy is trying to kill me, but they failed in their first attempt.”

Buck’s dad takes this in stride:

This is actually oddly true-to-life. Parents are like this. If I called my dad and told him that he was about to hear I’d been killed in the bombing of a police car, but that I was really still alive, traveling incognito to hide from the shadowy conspiracy that was trying to kill me, he might respond similarly, asking if this meant I wouldn’t be able to come up for Easter. 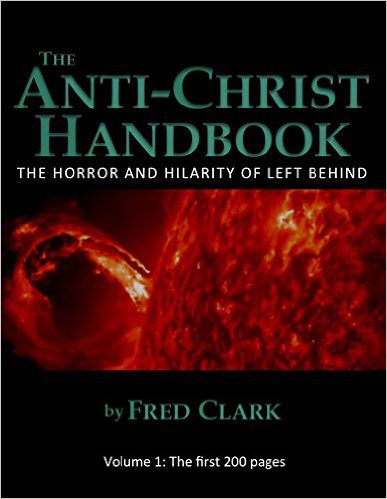 The idea here of memorial services for the disappeared is another reminder of the larger background context that LaHaye and Jenkins, and their protagonists, continue to ignore. With 2 billion people suddenly gone, including all of the world’s children, you might think that a few other people besides Buck’s dad and brother might be conducting such memorials. You might expect every town square and stadium to be filled with candlelight vigils where the names of the departed are read in somber tones. You might expect a wave of public sorrow with omnipresent black armbands or ribbons. You might expect the now-abandoned churches and elementary schools to be filled with grieving, shell-shocked parents. And you might expect these millions of grieving parents not only to seek comfort, but to demand answers about what happened to their children — all of their children.

But none of that happens here.

Tim LaHaye and Jerry Jenkins don’t give a second thought to these billion missing children and so, in the story they’re telling, neither do the children’s parents.

“I’m not going to be able to play dead that long,” Buck tells his dad. “Once the people at the Global find out I’m all right, the secret won’t hold for long.”

That secret is all that’s keeping Buck alive at this point, and he put that secret at risk by contacting his family. But he’s probably right that the secret could still hold at least until his colleagues at the magazine learn the truth. So as long as they don’t know, Buck could still be safe:

Buck switched to another phone and called the Global …

Disguising his voice, he asked the receptionist to plug him into Steve Plank’s after-hours voice mail. “Steve, you know who this is. No matter what you hear in the next 24 hours, I’m all right. I will call you tomorrow and we can meet. Let the others believe what they hear for now. I’m going to need to remain incognito until I can find someone who can really help. Talk to you soon, Steve.”

I’m thinking Buck could stand a refresher course on what “incognito” means.