In lefty-ish non-profit circles, one often runs across a famous quote from the sociologist Margaret Mead: “Never doubt that a small group of thoughtful, committed citizens can change the world; indeed, it’s the only thing that ever has.” That’s inspiring when you see it taped on the side of a filing cabinet in the church-basement office of some rag-tag homeless advocacy group. But it’s also got a darker side.

I can imagine the same quote hanging in the offices of, say, the Project for a New American Century, or the Heartland Institute, or the Club for Growth. I can imagine a man like Paul Manafort having that same quote sitting on his desk, probably in some expensive-looking brass-engraved plaque. I can imagine him looking at it occasionally and smiling.

It’s unsettling to imagine Paul Manafort smiling. If he is smiling, it’s because he’s winning — because his small, committed group is, yet again, changing the world. And that usually means someone, somewhere, is getting killed.

You’ve seen characters like him before, usually in movies (these days, probably played by Brian Cox). And you’ve glimpsed them on the news or in the paper, too, but off to the side of the frame, unidentified, their presence unexplained. They rarely draw attention to themselves, but if you start to pay attention you start noticing that they’re always somewhere in such pictures — always lurking off to the side there, for decades, as the faces at the podium change. And when you start to piece together all the different events and occasions in which you see them, you may start rethinking Mead’s observation about a small group of committed people and you may start to find it far less inspiring.

Paul Manafort and his lobbying firm of Black, Manafort, and Stone are not thoughtful — smart, yes, and shrewd, but not thoughtful. Nor are they citizens — that’s not where their allegiance lies. But they are a small group of committed people and they have been changing the world for a long, long time. Never for the better.

Back in the 1980s, for example, Manafort’s firm helped some South Jersey slumlords fleece HUD for millions while exploiting and preying on low-income tenants:

Manafort … took on clients and causes that even most of his colleagues on K Street considered outside the usual bounds. 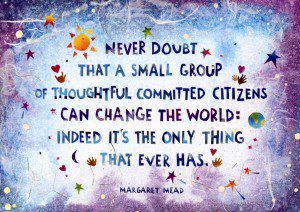 Black, Manafort, and Stone hired alumni of the Department of Housing and Urban Development then used those connections to win $43 million in “moderate rehabilitation funds” for a renovation project in Upper Deerfield, New Jersey. Local officials had no interest in the grants, as they considered the shamble of cinder blocks long past the point of repair. The money flowed from HUD regardless, and developers paid Manafort’s firm a $326,000 fee for its handiwork. He later bought a 20 percent share in the project. Two years later, rents doubled without any sign of improvement. Conditions remained, in Mary McGrory’s words, “strictly Third World.” It was such an outrageous scam that congressmen flocked to make a spectacle of it. Manafort calmly took his flaying. “You might call it influence-peddling. I call it lobbying,” he explained in one hearing. “That’s a definitional debate.”

Strangely, the HUD scandal proved a marketing boon for the firm. An aide to Mobutu Sese Seko told the journalist Art Levine, “That only shows how important they are!” Indeed, Manafort enticed the African dictator to hire the firm. Many of the world’s dictators eventually became his clients. “Name a dictator and Black, Manafort will name the account,” Levine wrote. (Levine’s piece, published in Spy, featured a sidebar ranking the ethical behavior of Washington lobbyists: It found Black, Manafort the worst of the bunch.) The client list included Philippine strongman Ferdinand Marcos (with a $900,000 yearly contract) and the despots of the Dominican Republic, Nigeria, Kenya, Equatorial Guinea, and Somalia. When the Center for Public Integrity detailed the firm’s work, it titled the report “The Torturers’ Lobby.”

You might not think that a slumlord on the edge of the Pine Barrens would be only one step removed from the kleptocratic tyrant who leeched the life out of the DCR, but connections like that are woven throughout Foer’s long report on Paul Manafort. Raymond Reddington would be envious of Manafort’s Rolodex. Indeed, the article reads like an episode guide to The Blacklist — an endless parade of rogues, tyrants, criminals, oligarchs, Watergate ratf–kers, arms dealers, and almost anyone you’ve ever written an Amnesty International letter to on behalf of some political prisoner.

But as thorough as he attempts to be, Foer is unable to calculate the two totals — the two vast and immeasurable sums — that lie at the heart of this story. He cannot quantify the body count and the huge toll of human suffering brought about by Manafort’s decades of work igniting and prolonging wars, propping up dictators and stifling democracy. Nor can he quantify the massive fortune Manafort has been paid for all this dark work over all these years. (“Money arrives to Manafort circuitously,” Foer writes, “sometimes through the dodgiest of routes.” And he follows one thread as far as possible, through a Lebanese arms dealer named Abdul Rahman al-Assir and a French legal scandal referred to as “the Karachi Affair.”)

All of this is in addition to the work that Manafort and his colleagues have been doing here in America as campaign consultants. He worked on Gerald Ford’s campaign in 1976, and then on Reagan’s Southern Strategy in 1980 and the George H.W. Bush campaign in 1988 (al-Assir attended Bush’s inauguration gala as Manafort’s guest). That’s the experience that led Donald Trump to hire him as, initially, an adviser for the delegate process in this year’s GOP primary. Foer writes:

Given Manafort’s experience and skill set, it never made sense that he would be limited to such a narrow albeit crucial task as delegate accumulation. Indeed, it didn’t take long before he attempted to seize control of the Trump operation — managing the budget, buying advertising, steering Trump toward a teleprompter and away from flaming his opponents, appearing on air as a primary surrogate.

But as Foer writes in his conclusion, the really pertinent experience Manafort brings to this role wasn’t his prior work in Republican politics, but his long decades of handling reprehensible tyrants and warlords:

Manafort has spent a career working on behalf of clients that the rest of his fellow lobbyists and strategists have deemed just below their not-so-high moral threshold. Manafort has consistently given his clients a patina of respectability that has allowed them to migrate into the mainstream of opinion, or close enough to the mainstream. He has a particular knack for taking autocrats and presenting them as defenders of democracy. If he could convince the respectable world that thugs like Savimbi and Marcos are friends of America, then why not do the same for Trump? One of his friends told me, “He wanted to do his thing on home turf. He wanted one last shot at the big prize.”

Right now, a small group of committed people are intent on changing the world. It’s going to take a large group of thoughtful, committed citizens to stop them.

May 3, 2016
That rug really tied the room together
Next Post