That time I was the evil opposite of Neoliberalism

I was supposed to learn what Neoliberalism means back in the early 1990s, in seminary. We were studying various Christian economic perspectives and talk of “Neoliberalism” was very trendy in certain church circles at the time, so one of the texts we were supposed to read was Amy L. Sherman’s 1992 book Preferential Option: A Christian and Neoliberal Strategy for Latin America’s Poor.

Alas, I didn’t finish that book. I stopped reading on page 51.

I can cite that page number so precisely because page 51 is where Sherman denounces the epitome of everything that Neoliberalism is against. And, surprisingly, that epitome turned out to be me.

Me personally. Very specifically me.

My first reaction was simply the angry thought: Poem? That wasn’t anything like a poem! Why is Sherman calling it that?

My second reaction was: Wait … how did something I wrote in the library comment book at my college wind up “circulating in [an] urban ministry office” several states away?

But eventually I got over that initial bewilderment and focused on the book’s weird argument, which was that my youthfully earnest sectarian expression of supererogatory altruism was somehow the apotheosis of the faulty logic of some kind of moribund Big Government Liberalism. Such thinking, she said, was the first step on the road to serfdom. It was the logic of “live simply that others may simply live,” she said — which was infernally dangerous because it “makes many Christians receptive to a statist model of development.”

Assigned reading or not, the book thereby forfeited any of the logical or factual credibility that might have allowed me to turn to page 52 and keep reading. As a college student, I had the temerity to suggest that we shouldn’t treat life as a game of musical chairs. Years later, a proponent of “Neoliberalism” had come across that suggestion, mistaken it for a “poem,” and then attacked it as an example of some crypto-Stalinist sentiment that embodied everything wrong in the world. OK, then. 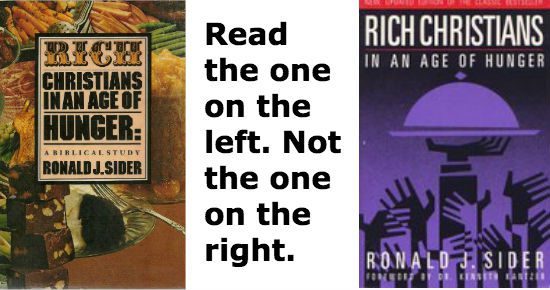 So it wasn’t until a few years later, working on a new edition of my boss’s biggest book, that I reluctantly had to revisit this elastic ideology of “Neoliberalism” and learn what its proponents actually believed. This was a tricky thing to do in the 1990s, as the label was being claimed by and applied to a host of different and incompatible things. Bill Clinton was a Neoliberal. No, no, no — Bill Clinton was a betrayal of Neoliberalism. Or neither. Or both.

For some the “Neo” just meant “I’m a liberal who wants our agenda to carry more states than Mondale and Dukakis” — it was just a semantic way of avoiding the negative associations the right had worked so hard to affix to the word liberal (the same dynamic that leads many of the anti-Neoliberal progressives these days to prefer the term “progressive”). For others, the term “Neo-liberal” was a way of avoiding the ethical and economic baggage of their own anti-liberal legacy. Some who claimed the label as a badge of honor seemed to be simultaneously hurling it at others as an epithet and an accusation.

The word was contested, with competing meanings by competing claimants for ownership of it. Neoliberalism was large, it encompassed multitudes.

The vague generality of that fuzzes up the diagnostic usefulness of Monbiot’s essay. It’s like a doctor saying, “You’re unwell.” That may be true enough, but it’s not particularly helpful.

The odd thing now is that the word is contested in pretty much the opposite way that it was contested back then. It used to be laissez-faire capitalist “Neoliberals” attacking liberals because, in their view, anything short of pure free-market ideology was indistinguishable from a “statist model.” Now those same liberals are accused of being “Neoliberals” by those who say that anything short of statist models is indistinguishable from laissez-faire capitalism. Neither of those accusations strikes me as helpful.

And but so, my point here actually is this: You should read the 1977 original edition of Rich Christians in an Age of Hunger and not the later editions in which the publisher sought to appease that book’s “Neoliberal” critics by revising the policy discussions in its final section.

* Apart from racism, patriarchy, homophobia, xenophobia, religious animosity, and all the other such things that are, in this framing, irrelevant or, at most, tangential to “the root of all our problems.”

May 25, 2016 Scenes from the class war (5.25)
Recent Comments
0 | Leave a Comment
"Breaking news is that the 1922 committee has told him to resign."
stewart Going down, down, down, and coming ..."
"Replace slavery with abortion and it describes 2022"
Reasonable 7/4 Flashback: Douglass
"I'm puzzled as to why you would regard Roxette as a guilty pleasure. They were ..."
Happy Noodle Boy 7/6 Flashback: Ain’t seen nothin’
"I accept your surrender again!"
Reasonable 7/5 Flashback: Identity and fantasy
Browse Our Archives
Related posts from slacktivist