The gun undermines the badge

One of the strangest things I’ve ever watched on television was Law & Order: UK. The Law & Order format and formula were so wholly familiar that all the differences stood out for me in sharp relief: CCTV everywhere! Apollo has an accent! Powdered wigs!

But then there was the strangest thing of all, completely alien and incomprehensible to me as an American: Police officers without guns. They have access to guns, mind you. “What if some criminal has a gun and …?” Well, then police can be armed accordingly. But they don’t carry guns.

Police officers without guns. Police officers who are capable of meaning something other than the nearby threat of lethal force. That’s utterly un-American, baffling, confounding.

And yet this is another possible reality.

And a better one. And, if we wish to be a free people, it is a more legitimate one. 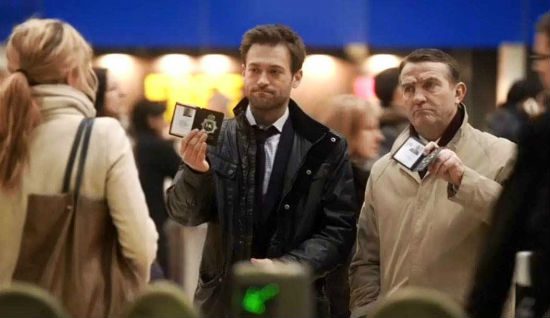 Here in America, of course, police officers carry guns. All the time. And, therefore, guns are their symbol of authority. Not badges.

Yes, American police also carry badges, but that’s almost irrelevant. Guns are louder than badges. A police officer’s badge can be a meaningful symbol of authority, of “law and order.” But when that badge is always accompanied by a gun it is no longer allowed to convey that meaning. The gun demonstrates, unambiguously, that the badge is insufficient — that it’s meaning is ultimately meaningless, derived from something else and inconsequential without that something else.

A badge, by itself, can mean something. A badge accompanying a gun becomes just flair and decoration.

Carrying guns all the time thus undermines the authority and the legitimacy of the police. It prevents them from being, primarily, people who wear the badge, and it turns them into, primarily, people who carry guns. The gun eclipses the badge to the point that, as Danny Glover said to the boy with a gun in Grand Canyon, “You ain’t got the gun, we ain’t having this conversation.”

So far, in 2016, American police have killed some 560 civilians — the overwhelming majority of whom were killed with guns. That figure comes from The Guardian — a British newspaper — because American police do not reliably keep track of such information.

The shocking thing here is not just the sheer number of American citizens killed by police. The really disturbing thing is the apparent lack of concern or interest in that number on the part of American police.

If American police derived their authority from badge or from office — from the rule of law or even merely of order — then we would expect them to be a reliable, trustworthy, concerned source of information about citizens killed by police. We would expect them to have some interest in such numbers — to care about them — if only as a matter of tradecraft.

But because American police have sidelined badge and office, relying instead on the gun as the source of their authority, they have little interest in tracking this. They care about such reporting only to the extent that they view such efforts as a threat — as a challenge to their primary source of authority.

That suggests something pervasively, fundamentally wrong with American policing. That demonstrates, again, that the gun is undermining the badge and the office.

This is why our constantly armed law enforcement can be police, but can no longer really be police officers. The office, like the badge, is overshadowed by the gun as an insufficient, subordinate source of authority, meaning and legitimacy.

That’s a problem, because we actually do need police officers. We need their badges and their office far more, and far more often, than we need their bullets or their guns.

So am I saying that American police should not carry guns? That’s wild, unthinkable, as incomprehensibly foreign as trial attorneys in robes and powdered wigs. But, yes, that’s exactly what I’m saying.

Sitting here, at Point A, that may all seem a bit ridiculous. Our culture and identity seem like an insurmountable obstacle preventing us from ever leaving Point A, let alone ever arriving at something as wholly different as Point B. And I’m afraid I don’t have some genius insight into any path for such a radical transformation.

But that is what I believe needs to change. Police should not carry guns. They should carry badges, and those badges should be allowed to mean something.