‘You will find out on that day …’: False prophets and lost endings

The Republican National Convention opened yesterday in Cleveland with a horrifying “benediction” from prosperity-gospel huckster Mark Burns. (You can watch it here, but I’d wait an hour first if you’ve recently eaten anything.)

Burns has me thinking again of Zedekiah son of Chenaanah, the ridiculous court prophet-for-hire from the Bible. Like Burns, Zedekiah saw his role as sucking up to the powerful and telling them whatever they wanted to hear, pretending in doing so that he was speaking for God.

We meet Zedekiah in 2 Kings 22. It’s a terrific story with vivid characters, a suspenseful build-up and then … a missing ending.

The story takes place while Ahab is king of Israel. Ahab is a bad guy, a villain, the epitome of a wicked and unjust king. He wants to make a military alliance with Jehoshaphat, the sorta/maybe good-ish king of neighboring Judah, enlisting the southern kingdom’s help in going to war against this story’s designated enemy, Aram.

Before agreeing to this, Jehoshaphat suggests they check in with the prophets and see what God has to say about this plan. Ahab is, like, “No problem. I’ve got a bunch of prophets right here on my payroll.” Turns out he has a whole parliament of prophets — “about four hundred of them” — and that they unanimously affirm that Ahab is great, his plan is great, and that God says he’s going to win a really great victory.

The spokesman for this squadron of royal yes-men is the aforementioned Zedekiah son of Chenaanah, who also turns out to be a prop-prophet:

Zedekiah son of Chenaanah made for himself horns of iron, and he said, “Thus says the Lord: With these you shall gore the Arameans until they are destroyed.” All the prophets were prophesying the same and saying, “Go up to Ramoth-gilead and triumph; the Lord will give it into the hand of the king.”

But Jehoshaphat is still a bit skeptical. “Is there no other prophet of the Lord here of whom we may inquire?” he asks.

And Ahab, reluctantly, tells him there’s one other prophet, but that he’s a cranky jerk: “There is still one other by whom we may inquire of the Lord, Micaiah son of Imlah; but I hate him, for he never prophesies anything favorable about me, but only disaster.”

So Micaiah gets summoned before the two kings, where they tell him about Ahab’s plan and about how the 400-some other prophets all said that God says it’s a great plan and sure to succeed. All the other prophets said, “Go up to Ramoth-gilead and triumph; the Lord will give it into the hand of the king,” they tell him, so what do you say?

And Micaiah, who doesn’t much seem to care for kings, is all like, “Well, then I guess you should go up to Ramoth-gilead and triumph; the Lord will give it into the hand of the king.”

But he’s apparently rolling his eyes or making air quotes or doing whatever it was people 3,000 years ago did to express disdainful sarcasm because Ahab yells at him and demands that he tell them what he really thinks God has to say. So Micaiah does, and it’s pretty harsh — not just to Ahab, but to all 400 of his hired court prophets:

Then Micaiah said, “I saw all Israel scattered on the mountains, like sheep that have no shepherd; and the Lord said, ‘These have no master; let each one go home in peace.’ …

“Therefore hear the word of the Lord: I saw the Lord sitting on his throne, with all the host of heaven standing beside him to the right and to the left of him. And the Lord said, ‘Who will entice Ahab, so that he may go up and fall at Ramoth-gilead?’ Then one said one thing, and another said another, until a spirit came forward and stood before the Lord, saying, ‘I will entice him.’ ‘How?’ the Lord asked him. He replied, ‘I will go out and be a lying spirit in the mouth of all his prophets.’ Then the Lord said, ‘You are to entice him, and you shall succeed; go out and do it.’ So you see, the Lord has put a lying spirit in the mouth of all these your prophets; the Lord has decreed disaster for you.”

This is when our boy Zedekiah springs into action. Micaiah has insulted him — accused him of having a “lying spirit,” and he’s got to respond to that. Plus, Micaiah has just upset King Ahab, and Zedekiah knows that it’s his job to say whatever he has to say to keep Ahab happy:

Then Zedekiah son of Chenaanah came up to Micaiah, slapped him on the cheek, and said, “Which way did the spirit of the Lord pass from me to speak to you?”

Micaiah replied, “You will find out on that day when you go in to hide in an inner chamber.”

The king of Israel then ordered, “Take Micaiah. … Put this fellow in prison, and feed him on reduced rations of bread and water until I come in peace.'”

Micaiah said, “If you return in peace, the Lord has not spoken by me.” And he said, “Hear, you peoples, all of you!”

This is top-notch storytelling — a fantastic, detailed set-up for what’s sure to follow in the final act of this story. Our hero, Micaiah, is sent away to prison to be slowly starved on bread and water, but the seeds of his vindication have already been sown. And the demise of the odious Zedekiah is foreshadowed as well, with tantalizing specificity. Something satisfyingly just is going to happen to him when all his obsequious, power-hungry lies come crashing down and he finds himself going “to hide in an inner chamber.”

So the kings go off to battle against Aram and they get routed, just as Micaiah said. Ahab is killed and Jehoshaphat barely escapes with his life. And then …

Then nothing. That’s where this story stops. Ahab’s son Ahaziah succeeds him on the throne and 2 Kings just moves along with stories about him and the prophet Elijah. We never hear anything more about Micaiah, or Zedekiah, or an inner chamber, or any of that.

This is unacceptable. This simply will not do. All that carefully crafted set-up and then, abruptly, nada. It’s immensely frustrating.

It’s so frustrating, in fact, that I haven’t got the patience to do what I should be doing here, today, with this story — discussing what it has to teach us about the faithlessness and lying spirit of Zedekiahs like Mark Burns, and about the inevitable downfall of the arrogant Ahabs they serve. 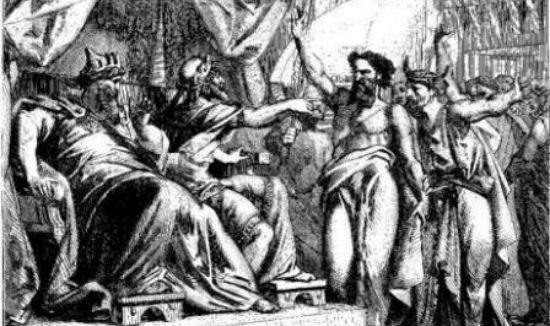 That’s all true, and very pertinent and timely and all that. But you can probably work that out for yourself. The story is strong enough, and pointed enough, on its own that it doesn’t need me highlighting or underlining its vivid lessons and arguments.

And that’s good because, as much as I’d like to focus on the meaning of the story, I’m too distracted by the maddening absence of its ending to pay attention to anything else. I have too many questions about this unfinished story.

I know that some really sharp biblical scholars occasionally stumble across this blog. Here’s hoping some of them will find this and be able to point us in the direction of answers to some of these questions:

1. Other than the obvious indications from the story itself, is there other textual or historical evidence to suggest that we’re missing a big chunk of something here?

2. What’s the general scholarly take on this? Is the lost ending of this story considered a textual accident? Or is the theory that this is a deliberate excision by some editor or redactor?

3. Is there some traditional or rabbinical lore supplying a conclusion to this story? What does that have to tell us of whatever became of Micaiah and Zedekiah?

4. The parallel to 2 Kings 22 in 2 Chronicles 18 is pretty much verbatim identical — up to and including the missing ending. What, if anything, can we infer from that?

5. Where the heck is Elijah in this story? His absence in this story — his apparent non-existence — is puzzling. What’s the deal with that?

6. Elisha too, not to mention the whole cast of other apparently faithful-but-nameless prophets in the preceding Ahab chapters of 2 Kings. Where are they in this story?

7. How big was the population of Israel during the reign of Ahab? Because based on 2 Kings, it seems like the prophet sector must have constituted a significant chunk of the nation’s economy. We’ve got Zedekiah and his 400 or so court prophets. Then there’s Elijah, Elisha, Micaiah and a dozen or so other prophets with speaking parts. Jezebel apparently slaughtered hundreds more prophets, but Obadiah saved another 100 of them. (Not to mention another 450 priests of Baal competing for the same market niche.) That just seems like a lot of prophets-per-capita for a relatively small nation. How many do we think there might have been?

8. Seriously, though, how does the story of Micaiah and Zedekiah end? (Make something up if you have to.)

July 19, 2016
Culture warriors have weird ideas about how courts work
Next Post

July 20, 2016 Jesus loves you more than you will know
Recent Comments
0 | Leave a Comment
"The correct spelling of Not-Sees will be rejected by the nanny-bot. However, "Nazi Fascist Republican" ..."
reynard61 Straining at gnats and swallowing camels
"Sounds like the "God Who is all-powerful but can't save EVERYONE's soul and no, I'm ..."
CroneEver Straining at gnats and swallowing camels
"Well hey, I've got international appeal! I should go on tour. Maybe I could find ..."
damanoid Straining at gnats and swallowing camels
"My guess is that, since abusers are driven by wrongful entitlement where they believe their ..."
Carstonio Postcards from the class & culture ..."
Browse Our Archives
get the latest updates from
slacktivist
and the Patheos
Progressive Christian
Channel
POPULAR AT PATHEOS Progressive Christian
1