How to make a fortune (and lose your soul) prophesying the End Times July 26, 2016 Fred Clark

Want to make some easy money?

As we discussed yesterday, Rapture-peddling “Bible-prophecy scholars” from the 1970s through the 1990s have had to awkwardly recalculate and reposition themselves due to their confident assertions that their imminent Rapture would occur within a “generation” of the establishing of the modern nation of Israel in 1948.

That bit had two of their favorite things: elastic numerology, and the ability to cite an authoritative-sounding set of biblical proof-texts. Never mind that those proof-texts had absolutely nothing to do with any of what their strained references implied — such proof-texts rarely do. Context and meaning aren’t generally a key concern for either “Bible-prophecy scholars” or their audience.

So guys like Hal Lindsey and Tim LaHaye — as well as less-slick, more credulously confident true believers like Harold Camping and poor Edgar C. Whisenant — all blithely referenced Matthew 24:34 as a Rapture prediction. That verse has Jesus saying this: “This generation will not pass away until all these things have taken place.”

You’d think that folks like Lindsey and LaHaye would want to steer clear of a verse like that, since their whole shtick was predicting a future, 20th-century “Rapture,” while Jesus, in the early First Century, seems to be predicting something to occur within the lifetime of his listeners. That verse thus seems like just the sort of thing that Preterists (Christians who believe the apocalyptic stuff discussed refers to first-century calamities the original writers and readers of the Bible were personally dealing with) would highlight to demonstrate that the Nostradamus-like interpretations of the “Bible-prophecy” industry are nonsense. But the prophets found a profitable — if implausible — way to twist that verse into something that sold a ton of books.

Yes, but there’s nothing in the text to defend such a …

And but so, this became the conventional wisdom of “Bible-prophecy scholars” from the 1960s right on through the end of the 20th century. The Rapture was coming, soon — within a generation of 1948, just as Jesus himself said.

Their consensus was also that a “biblical” generation meant roughly 40 years, because that’s how long the Israelites had to wait to enter Canaan after doubting God and Moses, and because that number shows up a lot in the Bible and thus seems, vaguely, biblical. 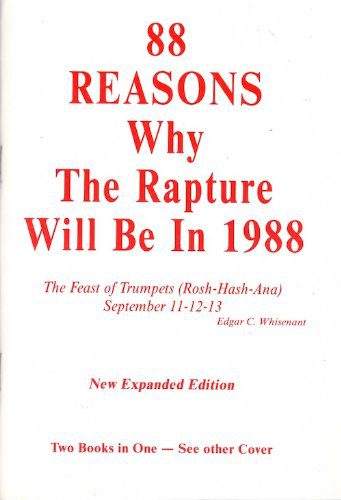 This 1948 + 40 years prophecy arithmetic was what gave such urgency to the “Bible prophecy” wave of the 1970s — Lindsey, Larry Norman, A Thief in the Night, and all the rest. The clock was ticking. The countdown was on.

Poor Whisenant took this arithmetic too seriously, thus publishing his too-specific — and, therefore, falsifiable — book 88 Reasons Why the Rapture Will Be in 1988. (Spoiler alert: It wasn’t.) He hadn’t perfected the BPS art of numerological elasticity, and thus his follow-up book — On Borrowed Time — didn’t sell as well as his first title. It seems the only trick he learned was the one-year fudge factor built into our BC/AD or BCE/CE system for numbering years, which doesn’t include a year zero and thus affords End-Times date-setters a two-year margin of blurriness.

The real pros at this business had a much larger arsenal of fudge factors to draw on, enabling them to continue referencing the prophetic significance of that 1948 date long past that first 40-year “generation.” After all, there are still plenty of folks around who were alive back in 1948, right? So that generation hasn’t yet passed away, right?

Clearly though, time and demographics are marching on. Bible-prophecy scholars in 2048 will still be able to point to a bunch of spry centenarians in support of their arguments about 1948, but the claim still seems less and less compelling with each passing year.

The next generation of Bible-prophecy scholars are going to need a newer, fresher angle. And I think I can imagine what it might be.

Thus, again, my question: Want to make some easy money? This racket can be immensely profitable for anybody with a little time and initiative (just so long as they’re not overly concerned about keeping their soul intact).

Here’s the idea: Follow the example of Lindsey, LaHaye and Whisenant and start with that 1948 date. Follow their lead and arbitrarily assert that Matthew 24:34 has something to do with that. Take that as your timeline and deadline for the imminent Rapture. But argue that their assumption of a “biblical” generation meaning 40 years or so is incorrect. Lean, instead, on Psalm 90:10 as your prooftext: “The days of our years are threescore years and ten; and if by reason of strength they be fourscore years, yet is their strength labour and sorrow; for it is soon cut off, and we fly away.”

What does that have to do with the founding of the modern state of Israel in 1948? Who cares? You’ve got numbers, and numbers are like magic. A little razzle-dazzle, a little prophetic phlebotinum, and you’ve got a nice “prophetic” window of 2017-2029, giving you 13 years to milk it for all it’s worth.

Please note that 2017 is next year. The sense of urgency is built-in, creating the potential for a revival of a 1970s-like wave of interest in your book or viral video sensation. (And, either way, the outcome of this year’s presidential election in America is bound to feed into that.)

You may be wondering why the year zero thing applies to our calculations here. The time span of 1948 to the present doesn’t cross over the BCE/CE threshhold, so why should it count?

Because by introducing Psalm 90 into the mix, we also get 2 Peter 3:8 as a bonus.

Do you see where that gets us? Hint: If a day is a thousand years, then a week is 7,000 years. Stir in a bit of young-Earth creationist arithmetic, a little Bishop Ussher, and you’ve got 6,000 years of history, then the Rapture, then a 1,000-year Millennial Sabbath.

So, obviously — mumble, mumble, wave hands, something, something (I’m not going to do all the work for you here) — the Rapture is prophesied to occur 2,000 years after the resurrection of Jesus Christ. The numbers here are: +33 years, +/- 10 years due to uncertainty about the specific year of Jesus’ birth, +/- 1 for the “year zero” factor, +/- 7 years for whether or not to include the “Great Tribulation” in this calculation.

The prophetic window for this variation gives us roughly 2017-2046. You could start writing now and milk this for three solid decades before ever having to admit that you were just making it up. Crank out a bunch of pseudonymous e-books pushing this scheme and you’re looking at rent money, at least. Go all in — hardcover editions from Tyndale House, free-will offerings on the Bible-prophecy seminar circuit, Charismanews op-eds, etc. — and by the time your prophecy clock expires in 2046, you’ll be able to retire someplace nice where you won’t have to listen to any of the millions you’ve misled over the ensuing decades.

Yes, you’ll also have become a soul-less, blasphemous, predatory monster, so you’ll want to factor that into your decision-making calculus. I personally think it doth not profit a person to gain the world and lose their soul. But I also can’t tell you what it’s like to be someone who hath gained the world, and many well-established soul-less, blasphemous, predatory monsters — people in a position to know — say that they’re pleased to have made the exchange and don’t regret a thing.