Makin’ sure your soul’s all right

• This could be important: Christianity Today interviews Nate Parker about his film, The Birth of a Nation.* Parker’s faith, and his fluency in the language of that faith, will be undeniable for CT’s readers, even while the substance of what he says may be challenging. This brief exchange, with CT’s Alissa Wilkinson, points to the heart of the matter:

AW: One thing that really struck me as I was watching it at Sundance is how much Scripture is in the film — wall-to-wall Scripture.

NP: More than any film that’s ever been made, from my research.

AW: That was striking. It shows how Scripture can be used to oppress people or to liberate them.

Yes. A “high view of scripture,” or reverence for “the authority of scripture,” or an affirmation of the “inerrancy” of scripture is never, in itself, meaningful, because any of those can be “used to oppress people or to liberate them.” Oppressors can happily, unreservedly sign the Statement of Faith for any white evangelical group that has one. Nothing in such statements excludes them or questions them. That’s a problem.

Thieves targeted a train carrying over 200 chests of used and damaged bank notes – cutting a hole in the roof of the train carriage and stealing 57.5m rupees ($860,000).

Police are unsure whether the thieves had hid in the carriage or cut their way into the train while it was moving.

The theft was only discovered when the train reached its destination. …

Police say they believe that a group of six to eight robbers may have been involved in the heist, which took place between Monday night and Tuesday morning during the train’s 217 mile-long journey. …

I have a theory about how they pulled this off, but I can’t figure out how the thieves got a hold of a Firefly-class spaceship. … 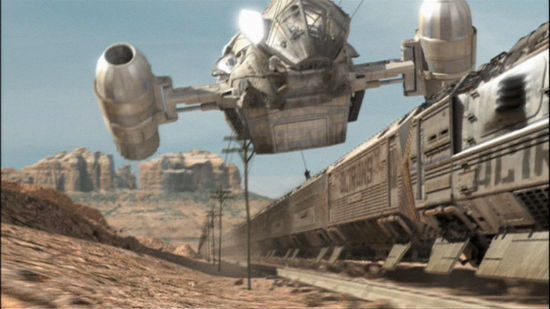 • Andrew Kaczynski documents some of Donald Trump’s ever-shifting opinions about Iraq. Here’s a Trump quote from a 2008 interview: “I am the greatest hawk who ever lived, a far greater hawk even than Bush. I am the most militant military human being who ever lived.”

• If you’re not reading Owen Ellickson’s darkly comic series, “TRUMP: “ on Twitter, you owe it to yourself to correct that.

• Hillary Clinton released her 2015 tax returns today. The public now has access to every year of her tax records dating back to 1992.

Looking at those 23 years of intimate details, the media will have only one question. No, not, “when will Donald Trump release his tax returns?” but, of course, “What horrible secret from 1991 is she hiding from us?”

• When you find a Prince video on YouTube, you’ve gotta link to it quick before it disappears.

* I’m so pleased with this interview that I’ll even just this once refrain from mentioning that Christianity Today is a publication that believes gay and lesbian couples are “destructive to society.”

"All People Are Holy": The Theology...
Mercy Not Sacrifice
Related posts from slacktivist