Send up a signal and I’ll throw you the line

• Ed Brayton manages to scoop Deane Galbraith on a Nephilim story. This one involves the claim from some WorldNetDaily blogger that the U.S. military recently killed an 11-foot-tall giant in Afghanistan, but covered it up because of the Darwinian cabal controlling America’s government. “If it points to the Bible’s narrative being accurate, they don’t want it.”

This is obviously false because, of course, the presence of a Nephilim in 2016 would not “point to the Bible’s narrative being accurate.” The Nephilim are antediluvian giants described in Genesis 6 and they all would have been killed in Noah’s flood. 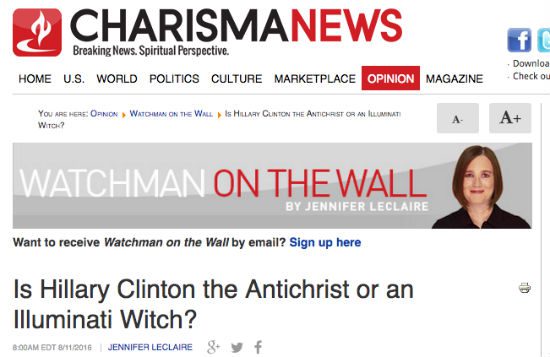 I appreciate the way LeClaire finesses the question-mark headline by not allowing for a yes-or-no answer. Is Hillary Clinton the Antichrist? No? Then she must therefore be an Illuminati Witch, apparently.

LeClaire — Charisma’s senior editor, sex-with-demons beat reporter, and self-proclaimed expert on the “Jezebel Spirit” — ultimately concedes that Hillary Clinton probably is neither the Antichrist nor an Illuminati Witch, but says she does have concerns about the former Secretary of State due to her “séances, during which she talks to Eleanor Roosevelt.”

(Note: Alas, Hillary Clinton has never actually participated in a séance during which she talked to Eleanor Roosevelt. Also, too, there’s no such thing as an Illuminati Witch, no matter how very badly Jennifer LeClaire and her readers wish there was because that would be so freakin’ cool, spiritual-warfare-wise — like [makes finger guns] pew pew pew, I’m a spiritual warrior cool.)

I appreciate that offshore wind isn’t the end-all and be-all of renewable energy sources. But the wind is blowing, and just leaving it there, untapped, while we continue to burn carbon doesn’t make sense. It’s much like Elon Musk’s plan to join the push for solar roofs. We already have roofs. Those roofs could be generating clean, renewable energy, but they’re not. That’s a waste. You can keep your self-driving cars — this is the kind of future we’re supposed to be living in.

• Phyllis Schlafly turned 92 on Monday. I, for one, am pleased that the anti-feminist, anti-gay, anti-immigrant, anti-poor old biddy has lived long enough to see her litigious children turn on each other and their mother in a vicious squabble over the family’s ill-gotten fortune raised from decades of hatemongering, scary-story direct mail appeals to terrified, gullible white people.

August 17, 2016
'What became of the Christian intellectuals?'
Next Post