Now we get moose and squirrel

Cunningham, by the way, is not in the NFL Hall of Fame. That seems wrong.

• I wouldn’t have guessed that in 2016 we would be looking at a Republican nominee for president who would be struggling to explain his apparent cozy ties to the Kremlin and various Russian oligarchs. And I would never have guessed that this story would be getting relatively little attention because, after all, it’s not even one of the Top 10 or Top 20 most scandalous things about the candidate. Donald Trump has benefitted from the bed-of-nails principle more than any other candidate I can think of. 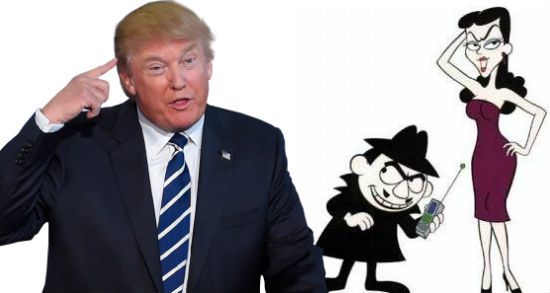 • OK, the Clinton Foundation is a big, wonkily effective charity enterprise established by Bill and Hillary Clinton. It does some amazing, important work empowering poor women in poor countries, providing access to AIDS medicine for people who could never otherwise afford it, and a host of other Good Things involving sustainable agriculture, climate change and education.

If Hillary Clinton had never been First Lady and never served as a senator and cabinet official, her achievements with the Clinton Foundation would be enough to make her a serious, experienced and formidable potential candidate for president.

But let’s be careful — the charity was also doing all of that great work back in President Obama’s first term, when Hillary Clinton was serving as secretary of state. It’s possible, then, to imagine some kind of “pay-to-play” scenario, wherein big donors to the foundation received special access, favors, or other special consideration from Clinton’s State Department. That’s kind of a weird, Robin-Hood-y slant on the usual form of such corruption, leveraging public office to fund private charity rather than line one’s own pockets (the Clintons don’t even draw a salary from the organization). But still, such a scheme is conceivable and imaginable, so it’s worth investigating to discern whether or not Clinton was engaged in it.

And now we know: She wasn’t. There is zero evidence of different or privileged treatment for Clinton Foundation donors. Journalists and political opponents have researched and scrutinized this with microscopic intensity and they’ve found nothing. The hypothetically imaginable scandal does not exist.

Some reading on that:

If FOIA can be used to force the release of every email sent or received by a cabinet member, why haven’t FOIA requests been submitted for all of them? It would certainly be interesting and newsworthy to see all of Leon Panetta’s emails. Or all of Condi Rice’s. Or all of Henry Paulson’s.

So what’s the deal? Why has this happened only to Hillary Clinton?

• Here are Scott Lemieux, Steve Benen, and Ashlee Kieler on how the current manufacturer of EpiPens is price-gouging by increasing the price of the life-saving necessity by some 500 percent over the past decade. (The same thing is happening to Diabetes patients struggling to afford the runaway price-increases for insulin.)

As Jordan Weissmann notes at Slate, the company, Mylan, isn’t so much trying to gouge consumers as to gouge insurers (who will pass on the resulting increased costs to everyone else — thereby also gouging consumers).

Tell me again about how unregulated markets make us all more free.