‘We must love one another or die’

After Kristallnacht — a violent anti-Jewish pogrom carried out with the blessing of the German government — the German policy of lethal ethnic cleansing could no longer be denied or ignored. Two months later, in January 1939, the Gallup organization’s American Institute of Public Opinion surveyed Americans about plans to provide refuge in this country for 10,000 Jewish children fleeing Germany. 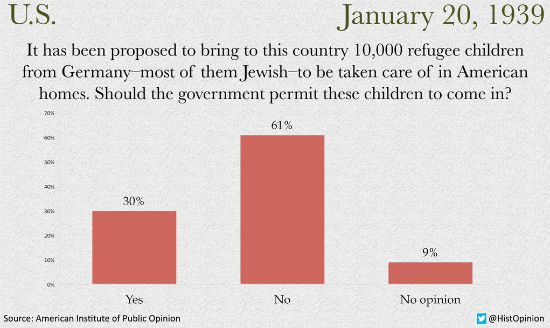 Children. Children fleeing actual Nazis after it had been revealed to the world what actual Nazis stood for and what they were trying to do. And two thirds of Americans said that they did not want their government to allow these children refuge here.

Damon Linker doesn’t see a problem with that. It is, he says, “nonsense” to view this as immoral behavior. It is simply the legitimate expression of “particularistic instincts that are not and should not be considered morally and politically beyond the pale.”

Actually, Linker argues for more than that. After asserting that these “particularistic instincts” are “natural to human beings and even coeval with political life as such,” he presents his larger thesis, which is that such instincts are, in fact, morally superior to “the universalistic cosmopolitanism of humanitarian liberalism” that tyrannically seeks to impose its will on the rest of the world, trampling “all particularistic forms of solidarity” under the heels of its cosmopolitan, humanitarian jackboots.

I really can’t tell if the either/or of Linker’s framework is the product of ignorance or dishonesty. Either way, it’s hogwash — a pretentiously written version of the same hogwash that religious-right hucksters sling when they say we must get rid of the separation of church and state before government thugs put all Bible-believing Christians in prison.

This either/or is so painfully dim that it feels awkward addressing it. But Linker is forcing us to.

Linker writes that “It simply never occurred to liberals prior to the mid-20th century that human beings might one day overcome particularistic forms of solidarity and attachment.” But they’re not the ones arguing that such particular forms of attachment are in conflict with universal rights and dignity. The person arguing that is Damon Linker — the imagined incompatibility of those things is the central thesis of his essay.

The rest of us have frameworks like subsidiarity or “an inescapable network of mutuality.” We know, as King wrote, that “Whatever affects one directly, affects all indirectly.” But only Linker is arguing that direct and indirect affects are a binary either/or. Only he is suggesting that subsidiarity and solidarity are in conflict.

Linker also imagines that King’s term “inescapable” is prescriptive, rather than descriptive. This is what he sees as the cruel juggernaut of the tyrannical, imperial UCHL Borg — an inescapable steamroller that threatens to crush or to assimilate the entire world, flattening all local particularities until we are all the same.

That’s so very much not what inescapable means there. King’s statement is descriptive — he is saying this is how the world works, this is how the world is. Mutuality and interconnectedness is not an ideology being imposed top-down against the futile resistance of defiant local rebels, it’s just reality.

And, as King said, this mutuality is sometimes direct and sometimes indirect. Neither he nor any other supposed UCHL was proposing that all pre-existing direct ties must be abolished so that all previously indirect ties can be made direct. The vast global conspiracy of imperial cosmopolitan humanitarians that Linker imagines does not exist.

Once one accepts Linker’s thesis that “love of one’s own” is in conflict with love of … well, anyone else, then things get really ugly, really fast. David Gushee discusses what Linker calls “particularistic instincts” and “local solidarity” in his study of The Righteous Gentiles of the Holocaust. Gushee uses a different term to describe such views. He calls it “boundaries of moral obligation.”

And “boundaries of moral obligation,” it turns out, are what enable previously decent-seeming people to act as bystanders to an atrocity. It’s what enables two-thirds of Americans, after Kristallnacht, to say, “Hey, those aren’t my kids.”

But in Damon Linker’s mind, pointing out that it’s deplorable to deny life-saving refuge to anyone’s children is some kind of an attack on the idea that we should love our own children. And it’s “nonsense,” he says, to condemn someone for not caring what happens to other people’s children.

Linker’s idea of an exclusive “love of one’s own” and his idea of exclusively “local solidarity” was something Auden once encountered in one of the dives on 52nd Street. His response to it epitomizes what Linker sneers at as “universalistic, cosmopolitan, humanitarian liberalism”: “We must love one another or die.”

That, again, is not an ideological edict being imposed on the world by a liberal conspiracy. It is a description of how the world works and how the world is. It is inescapable.

September 21, 2016
'To keep oneself unstained by the world'
Next Post