I keep seeing these clickbait ads teasing some “shocking” revelation about Amy Grant. Sometimes they show up here. 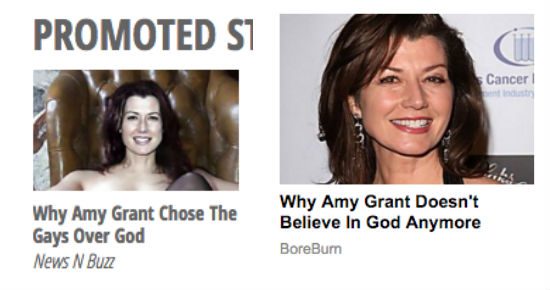 Oh, and Amy Grant is nowhere to be found in that list. She’s still a Christian who believes in God. To be clear, there’s nothing shameful about not believing in God — “atheist” is not a slur. What’s sleazy here is misrepresenting someone else’s beliefs.

The odd thing about this is that Amy has been the target of exactly this sort of misrepresentation for decades (ever since Lead Me On, at least), but that was mainly false witness borne against her by white evangelical Christians. So I guess these click-bait ads show us that we Christians can teach the world to follow our example. We’re not always good at being salt and light, but we’re teaching the wider world all about flinging arsenic and mud.

I was a youth-group-attending evangelical teen in the 1980s, and that’s where I first began to understand the way our tribe functions. We build up celebrities, then rip into them as a warning and a reminder to others that the same can happen to them if they step out of line. Follow the rules, or else. And pay attention, because the rules keep changing.

The rules are also different for members of the tribe and for outsiders. If an outsider — a politician, football player, actor or “secular” musician — said anything positive about God, no matter how vague, we would celebrate them as a champion of Christianity as though they had just recited the Athanasian Creed and then stood before us to be baptized. Thus their fame and accomplishments became ours vicariously by virtue of that single statement. But if someone who was one of us — an evangelical — said anything that might possibly be interpreted as half-a-degree off from the acceptable line of dogma, that person would be anathematized as an apostate.

That’s why Jimmy Carter was treated like a heretic while Ronald Reagan was revered as a saint. And it’s also why, weirdly, the tribe was praising “secular” songwriter Janis Ian for contributing a song to a Christian album while simultaneously criticizing Amy Grant for including a song by a “secular” songwriter on her album.

Soak in that weird tribalism long enough and you’ll find yourself, a few decades later, arguing that another niche celebrity from the ’80s — Donald Trump — is “God’s anointed choice for president.”

Anyway, here’s an evil secular song recorded by an apostate.

October 6, 2016 Does George Barna really believe international Jewish bankers are funding Black Lives Matter to start a race war?
Recent Comments
0 | Leave a Comment
Browse Our Archives
get the latest from
slacktivist
Sign up for our newsletter
POPULAR AT PATHEOS Progressive Christian
1