Where are the white evangelicals for McMullin?

Where are the white evangelicals for McMullin? October 18, 2016 Fred Clark

Benjamin Morris made waves last week with a FiveThirtyEight post about “How Evan McMullin Could Win Utah and the Presidency.”

The bit about the presidency is pretty far-fetched (involving an extremely unlikely electoral college tie heading to the House of Representatives), but McMullin really does have a strong shot at winning Utah’s six electoral votes. That’s because a majority of Utah voters are Republicans and Evan McMullin is actually a Republican.

The Republican Party itself has a nominee running in the general election, but that person, McMullin says, is not actually Republican, or conservative, or qualified for public office. That, in essence, is the logic behind the young, unknown, former CIA-operative and former legislative aide’s quixotic independent campaign: He wants to stop Donald Trump, not just from — God forbid — winning the presidency, but from completing the wholesale transformation of the Republican Party into his image. 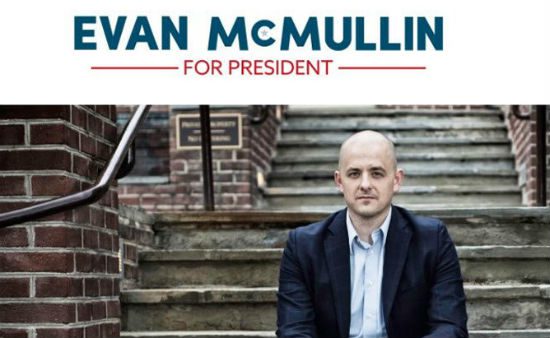 To be clear, I am not a Republican. I disagree, emphatically, with much of what Republicans believe and want and pursue. I think they’re wrong.

But I’ve also come to miss them. I prefer contending with their form of wrongness from the ascendant bundle of nonsense and white nationalism promoted and embodied by Donald Trump. I had a pang of something like nostalgia the other day when Evan McMullin tweeted something about “tax-and-spend liberals.” I wanted to respond, to point out that taxing and spending are, among other things, constitutional duties, and to point out for the 10,000th time that the real locus of our disagreement here is actually on who and what and how to tax and on what and where to focus the spending. And …

But all of that can wait until after November 8. Because right now I admire Evan McMullin for taking an admirable stand on matters that are, at this moment in history, more urgent than those long-running perennial disagreements and all those points on which I would insist that Republicans are, well, wrong. Right now, for the next three weeks, it seems more urgent to me to commend principled Republicans like McMullin who are condemning Trump’s open bigotry, his promotion of the deplorable alt-right, his demonization of immigrants and refugees, his conspiratorial ignorance, his denial and rejection of basic facts and reality.

Yes, I’d be quite pleased to see McMullin split the conservative vote in Utah to allow Hillary Clinton to capture the state. But I’d also be content to see McMullin win the state himself. Either one would constitute a vehement rejection of Trump and of Trumpism, and that would be a Good Thing.

It’s depressing, though, that I have to look to Utah to find conservatives likely to offer that kind of principled rejection of Trump. As I wrote earlier, the Latter Day Saints are putting the white evangelicals of the Bible Belt to shame. McMullin is Mormon himself, so sectarian loyalty plays some role here, but the larger factor seems to be that Mormons in general find Trump’s character, misogyny and bigotry to be repugnant in a way that most white evangelicals still do not. For many conservative Republican Mormons, Trumpism is a deal-breaker. For most conservative Republican evangelicals, it’s not. That’s why McMullin’s long-shot campaign is up-ending the polling in Utah but not in the Bible Belt states where white evangelicals dominate Republican politics.

Look, I get that most white evangelicals are reflexive Republicans and I get that this is largely due to the politics of abortion. I think they’re wrong about abortion — wrong on the policy and wrong on the premises for that policy — but I don’t expect to succeed in convincing most of them of that over the next three weeks. So I understand why the idea of voting for Hillary Clinton isn’t something many of them will be able to even begin to consider. (Again, I think they’re wrong about that, but hopefully we’ll have a chance to discuss that more during the next eight years of her presidency.) But why isn’t there more white evangelical enthusiasm for the conservative, anti-abortion McMullin?

Because McMullin’s argument about Donald Trump is correct. If Trump wins, he redefines the Republican Party in his image. And if that happens with the support of white evangelical Republicans, then that support also redefines white evangelicalism in Trump’s image. It will become, like Trump’s version of the GOP, an angry, dwindling mob of credulous white men, repelled by and repellent to everyone else — women, black people, Latinos, Millennials, the rest of the watching world.

I’m not saying support for Trump will harm white evangelicals’ Christian witness, I’m saying it will replace it utterly.

Maybe it already has. Maybe that’s why white evangelical Republicans, unlike their Mormon neighbors in Utah, aren’t looking for conservative alternatives to Trump. Maybe an ignorant, misogynist, white-nationalist candidate is exactly what they’ve always secretly wanted. Maybe, like so many of the Trump fans interviewed at his rallies, these white evangelicals hear the alt-right slurs and fever-dreams coming from the candidate’s mouth and gleefully shout that “At last, someone is finally giving us permission to say what we really believe!”

So far, I’ve seen a handful of conservative Republican white evangelicals coming out in support of McMullin. But only a handful. The majority, it seems, are poised to blame such folks for Trump’s defeat with the stab-in-the-back legend he’s already sowing to cast doubt on the legitimacy of his rejection.

I dunno. We’ll see over the coming weeks.

October 19, 2016 Debate night!
Recent Comments
0 | Leave a Comment
Browse Our Archives
get the latest from
slacktivist
Sign up for our newsletter
POPULAR AT PATHEOS Progressive Christian
1