When trouble comes to town 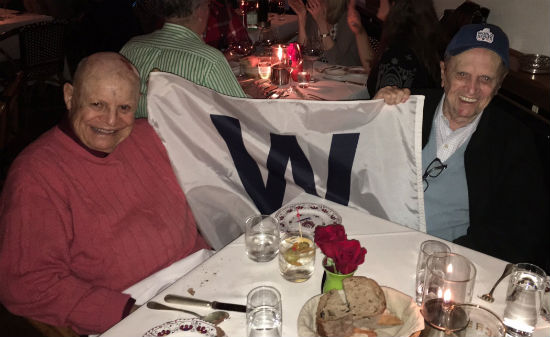 This world championship will require some difficult adjustments for the most devoted fans of the team. Being a Cubs fan has, for generations, been a mark of loyalty through disappointment. There was never any question of bandwagon, fair-weather support for the Cubbies. That built, and defined, character. I’ve thus always trusted Cubs fans for many of the same reasons I’m always suspicious of Yankees fans.

So Cubs fans are now going to have to learn to cope with this. Winning the world series means they’ll have to learn a new way to think about what it means to be them. They’ll need to figure out who they are now that they’re no longer who they used to be.

Still, that’s a happy problem, and I’m guessing they’ll handle it better than the millions of other Americans currently unable to accept reality because their sense of identity is still bound to a past that no longer exists. I don’t expect we’ll see maladjusted, reality-denying Cubs fans in red hats saying “Make the Cubs Suck Again.”

• “Humans Settled Australia’s Interior Way Earlier Than We Realized.” This is cool. Artifacts from the Warratyi Rock Shelter in central Australia — pigments and tools — reveal that the site was settled about 49,000 years ago.

Creationist Ken Ham, who is also from Australia, believes the entire universe is only 1/7 that age. As I wrote a few years back:

I just can’t fathom how someone could have lived in Australia believing the world is only 6,000 years old. There are all sorts of things you can’t do while believing that (like, for instance, going outside on a clear night), but living in Australia would seem near the top of that list. The indigenous Australians have stories, dances and paintings that are far older than 6,000 years. They’ve got jokes that are older than that. …

• It’s not surprising that a stellar bunch of talented women from Texas singing a song about Daddy and guns would be a smash hit with the audience at the Country Music Awards, and Nashville’s biggest stars certainly seemed to enjoy watching this:

But it turns out this enthusiasm wasn’t shared by a certain segment of the Country & Southern music audience watching from home and the Country Music Association was forced to remove references to the performance from its website the next day after seeing an outpouring of racist ignorance in response to the showstopper from Beyoncé and the Dixie Chicks.

• I’m pretty sure that if a public school invited Amy Grant to sing “Joy to the World” and “O Come All Ye Faithful” for a special Christmas assembly, they would get sued for violating the Establishment Clause with a pervasively, aggressively sectarian Christian message.

And they would lose that lawsuit, because how much more explicitly Christian can you get than Amy Grant singing Christmas hymns?

Yet, somehow, Christian “bookstore” chain LifeWay Christian Resources has decided that Grant’s new Christmas album is not explicitly Christian enough for their stores.

When hymns sung by Amy Grant aren’t “Christian” enough for you, I’m thinking maybe you’re drawing your tribal boundaries according to something other than creeds or quadrilaterals.

November 4, 2016 LBCF, No. 106: 'L&P&U&B'
Recent Comments
0 | Leave a Comment
Browse Our Archives
get the latest from
slacktivist
Sign up for our newsletter
POPULAR AT PATHEOS Progressive Christian
1