This weekend I listened to the latest episode of Messiah College history professor John Fea’s wonderful history podcast, The Way of Improvement Leads Home. Fea snagged a great guest for this episode, Dr. Manisha Sinha, whose massive The Slave’s Cause: A History of Abolition, is a National Book Award finalist. The conversation between these historians — and history teachers — is fascinating and insightful.

But what I want to talk about is Fea’s short reflection from just before his interview with Sinha, discussing how “The Slave’s Cause” intersected with The Bible Cause. That’s the name of his own most recent book following the 200-year history of the American Bible Society. The Bible society was founded in 1816 by many people who were generally sympathetic to the cause of abolition, but when pressed by leading abolitionists to do more, it flinched. 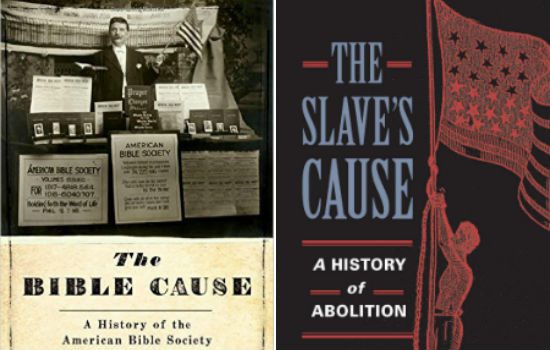 This may sound kind of esoteric — an academic discussion of some long-ago struggle between the long-dead leaders of two 19th-century benevolent societies. But it cuts to the heart of a debate that continues to this very day — as recently as Michael Wear’s backwards assertion just last month that “Democrats Have a Religion Problem.”

That’s how such disputes are always framed. The faction defending the status quo is — correctly — portrayed as the “conservative” side. They’re fighting to prevent change, to prevent reform or progress. They embody William F. Buckley’s definition of conservatism by standing athwart history and yelling “Stop!” And thus, because they are in that sense conservative, they also tend to portray themselves and to be portrayed by others as being religiously conservative.  Thus positioned as the representatives of religious conservatism, they are therefore also perceived as the defenders of true religion against the liberals and the anti-religious. Everyone else therefore has “a religion problem.” Everyone except them — the righteous remnant proudly defending true religion against the irreligious liberals who would abandon it.

Fea’s historical anecdote shows us why.

Fea sets the scene for the multi-year struggle that ensued between the American Bible Society and leading abolitionists beginning in the 1830s (this is my transcription from the podcast, so any errors here are likely mine):

Anti-slavery forces in America, particularly those who favored the immediate abolition of slavery, did not think the American Bible Society was doing enough to bring Bibles to slaves. The Bible Society was taken to task at the first meeting of the American Anti-Slavery Society in 1834.* The American Anti-Slavery Society included some of the leading abolitionists in the United States, including William Lloyd Garrison and Arthur Tappan. Up until this point, the American Bible Society did not have an official policy on the distribution of Bibles to enslaved men and women. According to the society’s constitution, the Bible should be distributed without note or comment to anyone who could read it, and this work then must be carried out by local American Bible Society auxiliary agencies operating in local communities across the country.

Because many Bible society auxiliaries in the South were governed by slaveholders who were not interested in having their slaves exposed to the message of liberty and freedom that, according to the anti-slavery forces of the North, was taught in the Bible, the leaders of the American Anti-Slavery Society pressed the American Bible Society to distribute Bibles directly to slaves. In order to encourage a move in this direction, the American Anti-Slavery Society offered the Bible society $5,000 to make sure that, as they put it, “every colored family in the United States be furnished with a copy of the Bible.”

The abolitionists quickly raised more than $14,000 to further bolster this effort — the equivalent of hundreds of thousands of dollars today. The American Bible Society punted — arguing that it was bound by its by-laws to work through its local auxiliaries and, therefore, not permitted to override the wishes of its Southern, slave-holding members. And they stuck with this lawyerly loophole for years. The dispute stretched on for decades, all the way up until the Civil War, with the Anti-Slavery Society and other abolitionist groups constantly trying to pressure the ABS to distribute Bibles directly to enslaved persons and slave-holding Christians fiercely resisting such a thing.

Here, then, is the raw fact of the matter: One side was fighting to promote the distribution of the Bible and the other was fighting to suppress and restrict it. One side was demonstrating utter and supreme confidence that the Bible supported its cause and that greater access to and familiarity with the Bible could only further its agenda. The other side was demonstrating that it feared, or suspected — or knew — that the Bible was, in fact, a dangerous threat to its agenda, its politics, and its beliefs.

That was the fundamental, undeniable fact of this dispute. And yet both then and now, today, more than a century later, this dispute is almost always framed and described in opposite terms.

These slavery-defending Christians were loudly proclaiming that their interpretation of the Bible was the clearest, simplest, and only true, acceptable, or possible interpretation. Yet their actions showed — proved — that they knew this was not true. Their actions proved that they knew the abolitionists’ interpretation of the Bible was more obvious and evident, more powerful, more real and more true. That’s the only explanation for their fierce insistence that enslaved persons must be prevented from gaining access to the Bible.

Think about it. Consider the pretense of their own supposed premise: The Bible supports and defends the institution of slavery, they said. Therefore, they said, any challenge to the institution of slavery was a challenge to the authority of the Bible. It was impossible, they said, to open the Bible and read what was said there without sharing their position — without concluding that slavery was good, and just, and approved by God.

If they honestly believed that in good faith, if they were confident that it was true, then nothing would have benefited their cause more than allowing and enabling every enslaved person access to this straightforward, authoritative Word of God — this final, clear, ultimate word that settled the matter beyond all dispute.

If they truly believed that their arguments about the Bible were true, then they should have been the ones advocating the distribution of Bibles to every enslaved person. The fact that they did the precise opposite — adamantly, for decades — is clear evidence that they didn’t wholly believe what they claimed to be true about themselves.

The abolitionists called their bluff and they folded. But even as they did so, they continued to pretend that they held the winning hand.

* It’s worth noting that this aggressive push to put Bibles in the hands of enslaved Americans began after Nat Turner’s rebellion, which took place in 1831. That uprising was a Bible-inspired, Bible-soaked revolt, and I have to think it played some role in both sides’ subsequent determination to get Bibles into, or to keep them out of, the hands of enslaved persons.

January 10, 2017 Go and learn what this means -- the bad-faith 'biblical' defense of injustice (part 2)
Recent Comments
0 | Leave a Comment
Browse Our Archives
Related posts from slacktivist