We are in an unprecedented time in the United States. … President Trump’s Executive Order restricting refugee resettlement will affect the CWS Immigration and Refugee Program immediately.

This is a time of uncertainty. But it is not a time to give up. We will not stop fighting for those we serve.

Please stand with us, choosing hope over fear and helping CWS continue to support the needs of this vulnerable population and others at home and abroad. Join us as we send a strong message to the world that refugees and immigrants are welcome.

The world changes. The Church’s calling doesn’t. Still we stand.

On Friday, January 27, the new presidential administration announced significant changes to U.S. Immigration policy, including a substantial reduction of refugees allowed to enter the U.S., as well as funding cuts to the Refugee Admissions Program — and to resettlement agencies like World Relief — that compromise our ability to adequately care for refugees and immigrants. 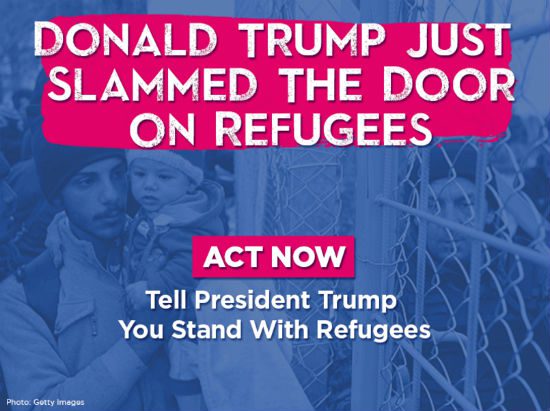 Donald Trump has issued a number of executive orders targeting vulnerable refugees and asylum seekers, which means your voice of opposition is more critical than ever.

History has taught us the deadly consequences of slamming the doors of this country shut on people just because of who they are and where they are from. We must prevent this administration from repeating the mistakes of the past. Here’s how you can help: [click that link, please, it’s a good list].

Mennonite Central Committee (MCC) U.S. decries the executive actions on immigration enforcement taken yesterday by President Trump as well as actions on refugee resettlement expected later this week. These actions portray immigrants and refugees as criminals and threats rather than seeing them as God’s beloved children.

In our society, rejection of the immigrant—“the other”—still runs deep, whether due to fear, ignorance, racism or selfishness. By building walls and turning away refugees we ignore Christ’s call to care for those in need and to love the stranger among us as we love ourselves.

Depriving refugee families of safety in the U.S. is irresponsible, immoral and un-American. It puts innocent lives at risk and does not make us safer.

Lutheran Immigration and Refugee Service (LIRS) strongly opposes the Trump Administration’s decision today to sign an executive order that bans the arrival of Syrian refugees; suspends the entire U.S. refugee resettlement program for 120 days; and reduces the overall number of refugees who will enter the United States this year from 110,000 to 50,000.

“The President’s actions today are a drastic contradiction of what it means to be an American. To halt the U.S. refugee program for any length of time and impose bans on specific groups of people who are fleeing violence and persecution, is reprehensible and completely disregards the values on which our country was founded,” said Linda Hartke, LIRS President and CEO. “The U.S. refugee program has always been emblematic of American values – protection of the most vulnerable, freedom, and family unity. The President’s actions place thousands of vulnerable refugees at risk and fail to make our nation safer.”

Refugee Council USA … stands in firm opposition to President Trump’s Executive Order. Among other things, we believe that this Executive Order will suspend the entire U.S. refugee resettlement program for 120 days; ban the arrival of Syrian refugees; and, reduce the overall number of refugees who will enter the United States this year from 110,000 to 50,000. It will also attempt to allow those who oppose resettlement to determine who is allowed to be welcomed to their communities. This Executive Order is not just about refugees, it is about who we are as a country. America, long the beacon of freedom and hope to millions of people around the world, has taken a giant step back today.