Our neighborhood lies between two major arterial highways in the county. And our street is the straightest route for anyone trying to cut through the neighborhood to get from one highway to the other — the shortest distance between two points.

It’s not a very efficient short-cut — a bit too winding, with a 25-mile-per-hour speed limit and stop signs at every corner. The area schools at the other end of the street make for long lines clogged with buses for an hour every morning and afternoon. And we have deer everywhere, which means that 25-mph speed limit effectively drops much lower around dusk every evening.*

But still every once in a while somebody in a hurry decides that cutting through our neighborhood and racing down our street might be a quicker way to get from Point A to Point B. This happens often enough that some worried parents on our street have put these signs out by the road. 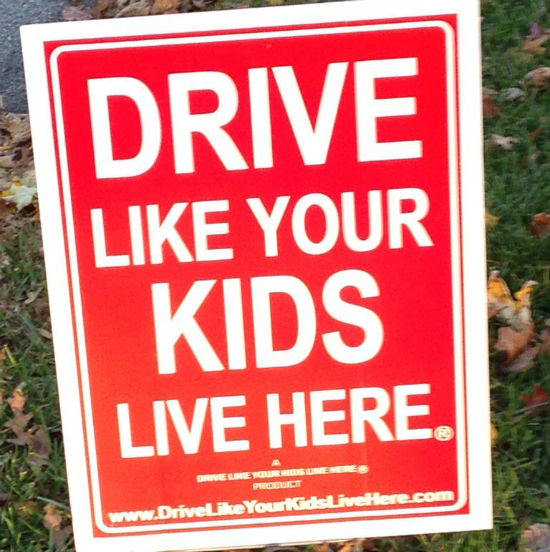 That’s shorter and kinder than the signs I would make, which would say something like: “Slow Down, Jackass, Because When A Deer Crashes Through Your Windshield I’ll Feel Bad For The Deer.”

I like these signs. I appreciate the sentiment. Slow down — there are children here. Imagine those were your kids. Would you want somebody recklessly speeding down your street past where your kids are walking and playing?

That is, on the one hand, a laudable appeal to empathy — a useful bit of instruction in empathy. It resonates with the moral authority of the Golden Rule. It asks passing motorists to consider the children of this neighborhood with the same care and concern they have for their own children. And that’s good.

But, on the other hand, there’s also something terrifying about the message of this sign. It seems to acknowledge and recognize something about our culture that is, frankly, monstrous and horrifying. That unlovely admission suggests that these signs are unlikely to do much good. It suggests that their appeal to empathy and respect for the Golden Rule is misdirected.

Think about it. “Drive Like Your Kids Live Here,” the signs say, because it’s understood that “Drive Like Somebody Else’s Kids Live Here” wouldn’t be an effective slogan. Just those last three words ought to be sufficient: Kids Live Here. But, given that those kids are not “your” kids, it’s expected that “you” would have no reason to care about that. If it’s somebody else’s kids — kids you don’t know, personally, or kids who aren’t a part of your personal bloodline — then it’s presumed that you’ll continue to drive recklessly and without regard for their safety.

The only hope to possibly persuade you to demonstrate a bit more caution is by making an analogy between those kids and your own kids. Or maybe it’s less an empathy-creating analogy than it is a kind of Hobbesian détente — the Golden Rule as a kind of quid pro quo negotiation. If you agree to abstain from driving recklessly around our kids, then we will also agree not to drive recklessly around your kids.

That’s an ugly thought, imagining that the safety of children depends, ultimately, on a white-knuckled truce between hostile adults who maintain a fragile balance of power thanks only to the threat of mutually assured payback. But that seems to be why these signs can’t say “Drive Like Somebody Else’s Kids Live Here” or just “Drive Like Kids Live Here.” Or just simply “Kids Live Here.”

It’s why we have to say things like “Imagine it was your kids having to drink that water like in Flint, Michigan.” Or things like, “Imagine if it was your kids getting priced out of health insurance because of a pre-existing condition.” Or “What if that was your kids in that Yemeni village?” We don’t expect concern for somebody else’s children to be compelling. A contemptuous disregard for “somebody else’s babies” is so commonplace that we’ve almost come to regard it as reasonable, rather than as monstrous.

But while our neighborhood signs acknowledge the shadow of that underbelly of the Golden Rule, and while they make a concession to that monstrous unconcern for others, they also suggest the possibility of something more hopeful. They ask us to learn to do better.

Because the problem here isn’t that we care too much about our own kids and kin. The problem is the notion that we should care about others less. And that’s just not how the world works.

Here, yet again, I’d point to the clarifying wisdom of subsidiarity and the “inescapable network of mutuality.” We are tied together in what the scripture calls “a single garment of destiny … Whatever affects one directly, affects all indirectly.” Each of us has particular, differentiated responsibilities and priorities, but they’re all connected.

Ultimately, it doesn’t matter where you’re driving, or wherever it is that you’re doing whatever it is you’re doing. Kids Live There. Your kids, my kids, our kids — everybody’s kids. And also much cattle.

So be careful. Be full of care. For everyone.

* A nearby pond also means that one block of our street is often congested with Canada geese. Those birds, remarkably, seem to understand how roads and cars and traffic work, even while refusing to just fly over them. Canada geese tend to keep out of traffic and, when crossing a street, they usually look both ways before stepping out into the road. They often even designate a crossing guard who stands in the middle, craning their neck and scanning in all directions as the others waddle across. Of course, the geese also have a strong sense of entitlement. Once they feel they’ve established their right-of-way, they take their time, insisting the road is theirs until they’re all quite done with it.

The flock of Canada geese who live around our local mall are such a constant presence there that the county put up a geese-crossing sign warning human drivers to slow down by the intersection on Route 30. Human drivers tend to heed that sign but, amazingly, so do the geese. That spot is exactly where they usually choose to shuffle across the highway. I’m never quite sure whether this is due to excellent research and positioning on behalf of the humans at PennDOT or if it’s somehow the geese choosing to comply with posted traffic laws.