Before agreeing to meet the nondescriptly gorgeous woman Buck has brought to his hotel room, Nicolae Carpathia wants to speak to him first, alone:

Here it comes, Buck thought, flashing Hattie an apologetic look and holding up a finger to indicate he would not be long. Carpathia’s gonna have my neck for wasting his time.

He found Nicolae standing a few feet in front of the TV, watching CNN. His arms were crossed, his chin in his hand. He glanced Buck’s way and waved him in. Buck shut the door behind him, feeling as if he had been sent to the principal’s office.

This isn’t all bad. The blocking is decent, and the image of the principal’s office is apt, if not terribly original. But the scene falls apart as soon as Nicolae starts talking.

“Have you seen this business in Jerusalem?” he said. Buck said he had. “Strangest thing I have even seen.”

“I was in Tel Aviv when Russia attacked.”

Earlier Buck said he was in Haifa during the attack, an hour or so north of Tel Aviv. But the bigger problem here, again, is that as inexplicable and astonishing as that experience might have been, it is only the second strangest thing Buck has ever seen. The world-altering strangeness of The Event was, and remains, more inexplicable and astonishing than the Ruso-Ethiopian carnage he witnessed that day in Tel Aviv and/or Haifa. Yet now, scarcely a week after that Event, the authors are intent on portraying everyone from Nicolae to Buck’s co-workers as utterly fascinated by the captivating spectacle of the trip-and-fall guys in Jerusalem. Even the parents of the missing children, apparently, are raptly watching CNN’s obsessive coverage, intrigued by this new mystery with a curiosity they never displayed about the disappearance of their own loved ones.

Carpathia kept his eyes on the screen as CNN played over and over the attack on the preachers and the collapsing of the would-be assassins. “Yes,” he mumbled. “That would have been something akin to this. Something unexplainable. Heart attacks, they say.”

“The attackers are dead of heart attacks.”

“Yes. And the Uzi did not jam. It is in perfect working order.

Nicolae seemed transfixed by the images. He continued to watch as he talked.

“… Look at this. The preachers never touched either of them. What are the odds?”

What could have caused this mysterious, almost miraculous occurrence of spontaneous heart attacks and a malfunctioning trigger mechanism? Perhaps it was the result of:

“… Some confluence of electromagnetism in the atmosphere, combined with an as yet unknown or unexplained atomic ionization from the nuclear power and weaponry throughout the world, [that] could have triggered — perhaps by a natural cause like lightning … this instant action.”

That was Nicolae’s dismissive “explanation” for the disappearance of 2 billion people — an explanation that was immediately embraced as wholly satisfactory. Thus, in our story, no one any longer seems the least bit troubled or mystified by the Event. It’s settled, old news. Time to move on, repaint the kids’ room and turn it into a home theater. 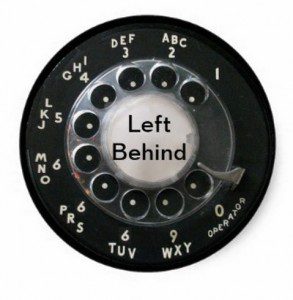 This is not good writing, but it’s not merely bad writing either. Bad writing can produce characters who seem alien and unbelievable due to their failure to respond to events in any recognizably human way, but LaHaye and Jenkins have produced an entire world of such characters. Bad writing entails a failure to convey or communicate whatever it is that the writer is trying to express. L&J have failed at something prior to and more fundamental than that. They began by portraying one whole world — the post-Event world following the Rapture, and then they abruptly and completely abandoned it for a different one, a different kind of world, in which the next set of preordained events from their End Times Checklist could be imagined.

I’m trying to think of precedents or examples of this elsewhere — other books or movies that have so utterly and arbitrarily left behind their original premises — but I can’t think of any. This particular literary sin needs a name.

Nicolae shifts topics to his hiring of Steve Plank as press secretary:

“I hope you know that you’ve crippled the Weekly.”

“Ah! I have strengthened it. What better way to have the person I want at the top?”

Buck shuddered, relieved when Carpathia looked away from the TV at last. “This makes me feel just like Jonathan Stonagal, maneuvering people into positions.” He laughed, and Buck was pleased to see that he was kidding.

This was funnier and in better taste than Nicolae’s earlier joke about the last thing to go through Alan Tompkins’ mind when his police car blew up. Yet whether or not such “kidding” is reassuring depends on what kind of laugh it was, particularly since the next thing they talk about is yet another suspicious death:

“Did you hear what happened to Eric Miller?” Buck asked.

“Your friend from Seaboard Monthly? No. What?”

Carpathia looked shocked. “You do not say! Dreadful!”

Having decided that Nicolae will never use contractions, Jenkins insists on having him say things like “You do not say,” even when the normal idiom is “you don’t say” and “you do not say” is something you do not say. Still, substituting a verbal tic for actual characterization is more than we get for most of the characters in this book.

We’re not told whether or not Buck believes Nicolae’s insistence that he is shocked — shocked! — by the news of Miller’s death. But while Nicolae is introducing himself to Hattie, Rosenzweig tells Buck he has a phone call. It’s Marge Potter, calling to tell him to return a call to Miller’s widow. Back in their comfort zone of telephonic communications, the authors indulge in a full page of the logistics of this bit of phone tag. We’ll glide past that to the latter phone call itself.

Carolyn Miller is upset by her husband’s death, but she takes a moment first to remind Buck of when they first met, “on the presidential yacht two summers ago.” Buck had forgotten this, but I suppose all these women from presidential yachts and presidential hotel rooms can start to blur together after a while.

She had talked to her husband just before he had gotten on the ferry and he had told her he was “tracking a big story.”

“… That was the last conversation I’ll ever have with him, and it’s driving me crazy. Do you know how cold it was last night?”

“Nippy, as I recall,” Buck said, puzzled be her abrupt change of subject.

“Cold, sir. Too cold to be standing outside on the ferry, wouldn’t you say?”

“And even if he was, he’s a good swimmer. He was a champion in high school …”

“What are you saying, Mrs. Miller?”

“I don’t know!” she shouted, crying. “I just wondered if you could shed any light. I mean, he fell off the ferry and drowned? It doesn’t make any sense!”

Jenkins clearly understands the cliches of the reporter who dies under suspicious circumstances while tracking a big story. What he doesn’t understand is how to have Buck respond to all of this without coming across like a callous and incurious jerk. After telling the Widow Miller that “I’ll be thinking of you,” he hangs up.

He decides to track down the phone number on the business card Nicolae gave Hattie, but instead of just dialing the number himself:

He called a friend at the telephone company. “Alex! Do me a favor. Can you still tell me who’s listed if I give you a number?”

Yeah, man, we know you would never betray your top-secret insider source when he risks his job to perform the ultra-complex reverse directory. The number, Alex says before disappearing from the story as suddenly as he arrived, is for an unlisted private line at the secretary-general’s office of the United Nations.

Buck was lost. He couldn’t make any of this compute. … Buck turned back to the phones.

Just to be clear, that’s a direct quote from the book itself: “Buck turned back to the phones.” This time he calls Steve Plank, the sixth person he’s talked to on the phone in seven pages. We’re back on track.

“Steve,” he said quickly, “your boy just made his first mistake.”

“What’re you talking about, Buck?”

“Is your first job going to be announcing Carpathia as the new secretary-general?”

I guess Buck could make this compute after all.

It’s important to read this in context. In Left Behind the secretary-general is not a beleaguered diplomat who shuttles around the globe hat in hand. He is, rather, the King of Kings — the leader of a global federation who “outranks” the American president in the same way that the president outranks state governors here. This is also how the authors think the real U.N. works. In their minds, Carpathia is about to become ruler of the world.

After making Buck promise to keep this off the record until it becomes official the following day, Steve explains:

“The Kalahari Desert makes up much of Botswana where Secretary-General Ngumo is from. He returns there tomorrow a hero, having become the first leader to gain access to the Israeli fertilizer formula.”

“… And he cannot be expected to handle the duties of both the U.N. and Botswana during this strategic moment in Botswana history, right, Steve?”

“And why should he, when someone is so perfectly suited to step right in?”

With this political masterstroke, Nicolae Carpathia has completed the most astonishing rise to power since Boutros-Boutros Ghali. True to form, ace reporter Buck Williams has scooped all of his rivals and learned the truth before any of them. And true to form, Buck has agreed not to report the story until long after everyone else has.

Buck has one last question for his friend:

“What did Eric Miller get too close to? What lead was he tracking?”

Steve’s voice became hollow, his tone flat. “All I know about Eric Miller,” he said, “is that he got too close to the railing on the Staten Island Ferry.”

Steve’s a quick study. One day on the job and already he’s helping his new boss cover up a murder. As ominous as his tone seems to be, though, I’m sure he’s not worried. Buck may have a long history of discovering shadowy conspiracies, but he never reports on it.