The Trump administration today released a slap-dash, vague, one-page document on the subject of “Tax Reform.” It offers little in the way of details, just a series of somewhat-connected bullet points relating to this general theme. This is not a plan or a proposal, but a wish-list of the various — and often contradictory — ingredients that Trump’s various (and often contradictory) advisers might want to see should such a plan or proposal ever get written.

The single-sheet almost-outline provided today isn’t so much President Trump’s plan for tax reform as it is his request for an extension on that assignment. He really intended to introduce such a plan in his first 100 Days but, you know, nobody knew it would be so complicated. 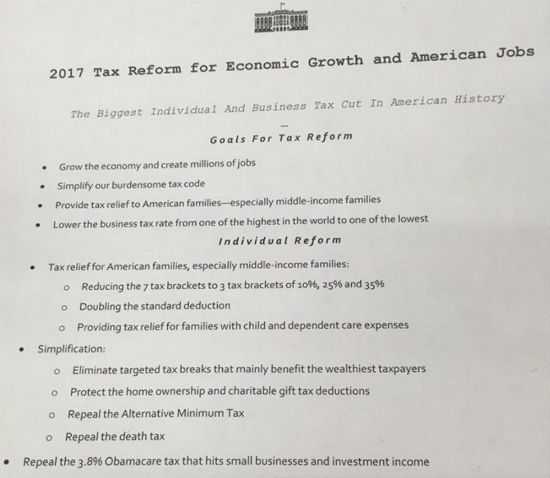 • “I like to pay taxes. With them I buy civilization.”

• What Trump calls the “home-ownership” deduction there is actually the mortgage-interest deduction and it’s a mess. Unfortunately, that mess is also a bearing wall for the current structure of our housing market, so while it’s not something we would want to include if we were creating our tax code and our housing market from scratch, repealing it would be chaotic and harmful, and even phasing it out over time would be extremely tricky. (Here’s a good CBPP overview of the problems with this deduction and some ideas for how it could be reformed.)

In any case, that deduction amounts to a tax subsidy of around $70 billion every year, all of which goes only to home-owners (not renters), and the bigger the house, the bigger the deduction. So, yeah, even though it also helps the middle class, it’s still a targeted tax break that mainly benefits the wealthiest and doesn’t do squat for the poor.

• The charitable deduction is also a mess and also one that mainly benefits the wealthiest for the simple reason that it is only available to those who itemize their taxes. Wage-earners and 1099-gig-servants may be more generous than the wealthy (as a percentage of income), but they cannot claim a tax deduction for anything they give. The charitable deduction also has a disproportionate benefit for the wealthy because charities that benefit the wealthy tend to be the main focus of the kind of giving inspired by the deduction. That’s not to say that art museums, orchestras, private hospitals, and Ivy League universities aren’t Good Things too, but it ain’t like most of this money is going to Habitat for Humanity or the local soup kitchen.

But, again, this mess is a load-bearing aspect of the current way our philanthropic sector and non-profit world is structured. So any proposal to get rid of it would need, first, to ensure some other means of bearing that weight.

• Of course, if one is really motivated by a prudent concern for the financial sustainability of the non-profit sector, then one wouldn’t also be proposing to eliminate the inheritance tax — a law that also leverages and incentivizes a huge amount of charitable giving.

The estate tax does not tax death. Nor does it tax the dead. It is an inheritance tax, and it is owed only by those receiving the windfall of an inheritance on the very largest estates. It is neither a burden nor a hardship for anyone paying it. Imagine you’ve just learned that your long-lost great-uncle has died, leaving you an inheritance of $20 million. But — oh no! — that means you’ll owe the estate tax and you’ll only be suddenly $15 million richer. I think you’ll be OK. (While I do not wish any harm to your hypothetical uncle, if anything like that does happen to you, please notice the “Donate” button in the right-hand column here and take a moment to visit my patreon page.)

• This is where estate-tax repeal advocates invent scary stories about people supposedly in jeopardy of losing the family farm after Pa passed away plowing the back 40. These stories are 99-percent bullshit and the other 1 percent is accounted for in the existing law. This objection is a lie about a lie about a lie.

• I used to call this the “Paris Hilton Tax,” in reference to the famous-for-being-famous, shamelessly self-centered and artificially pretty, heiress who was, at that time, constantly in the news. Happily, I am no longer perpetually being informed of what Paris is up to these days, so that reference will need to be updated. Let’s start calling it the “Ivanka Tax.”

• I like the estate tax. It’s the rare example of a tax that meets all three of the basic criteria for a good and responsible form of taxation. Taxes should be: 1) Sufficient, 2) Fair, and, 3) Simple.

• That’s the same reason I do not like the idea of a flat tax. A flat tax is simple, but it is neither fair nor sufficient.

• I work two jobs. So do most of my co-workers at both of them. We do this because balancing our household budgets required us to increase our revenue. Politicians who fret about budget deficits whenever the other party is in charge never seem to consider increasing revenue as a possibility. Like the awful “personal finance” pedants advising us to do all the things we’re already doing (bag lunches, no Starbucks, etc.), they can only imagine cost-cutting and austerity. They’re trying to balance their budgets by cutting their Netflix subscription instead of getting that second job. This would only make sense if the second job only paid $9.95 a month. (And, anyway, I like Netflix.)

• The idea of sufficiency is important for a second reason, apart from the principle that tax revenue must be sufficient to pay for the expenses of government. Sufficiency also relates to fairness, because some people have enough and others do not. Some people have more than enough while others have less than enough. Any talk of the “burden” of taxation that doesn’t start by recognizing that is useless.

• All talk of “tax reform” and of “tax simplification” also has to deal with the fact that Grover Norquist, et. al., are vehemently opposed to any effort to make paying taxes simpler. For a generation now, they’ve fought to ensure that the process of paying taxes is as onerous, complicated, intimidating and unpleasant as possible. It doesn’t have to be like that.

• The backdrop for Trump’s limp list of bullet-points is the same as for every other tax-reform proposal coming out of Washington: Wages are taxed at a higher rate than usury. This is not just unfair, it’s also dumb. It creates a disincentive for work. The claim is that taxing capital gains at a lower rate than wages creates an incentive for investment that will “create jobs.” But at the same time, it punishes anyone who takes one of those jobs.

Here, again, is one of those sections of C.S. Lewis’ Mere Christianity that most admirers of the book seem to have skipped:

There is one bit of advice given to us by the ancient heathen Greeks, and by the Jews in the Old Testament, and by the great Christian teachers of the Middle Ages, which the modern economic system has completely disobeyed. All these people told us not to lend money at interest: and lending money at interest — what we call investment — is the basis of our whole system. Now it may not absolutely follow that we are wrong. Some people say that when Moses and Aristotle and the Christians agreed in forbidding interest (or “usury” as they called it), they could not foresee the joint stock company, and were only dunking of the private moneylender, and that, therefore, we need not bother about what they said.

That is a question I cannot decide on. I am not an economist and I simply do not know whether the investment system is responsible for the state we are in or not. … But I should not have been honest if I had not told you that three great civilizations had agreed (or so it seems at first sight) in condemning the very thing on which we have based our whole life.