Here’s a local story typical of a more-than-local phenomenon. What happened was a couple of kids decided to stage a demonstration outside a local high school (not theirs), condemning the “American Holocaust!!1!”

They mean legal abortion. If you’re thinking that legal abortion isn’t comparable with the Holocaust, these kids would agree — they think it’s much, much worse. The Holocaust, after all, “only” killed 9 million Jews and others, but if you add up all the abortions and contraception-murders that have taken place in America since 1973, the “death toll” from abortion makes it way, way worse than the Holocaust.

Therefore, by the transitive property of fantasy-role playing delusional hyperbole, these kids are better than anybody who merely lost their lives fighting against the lesser evil of the Holocaust. Abortion is worse, so opponents of the worse thing must be better. Abortion is the greater evil, so opponents of the greater evil must be more virtuous, more noble, more courageous, heroic, righteous — more worthy of commendation and commemoration. Everyone should be holding parades, building shrines, and erecting monuments for these greatest-of-all heroes, the champions of the divinely sanctioned war against the American Holocaust.

This doesn’t quite amount to Holocaust denialism, but it is a kind of Holocaust diminishing — a way of disparaging the meaning and importance of that event and of reducing it to nothing more than a tool in service of some other end. That end is not primarily a political goal — ending legal abortion — but an emotional goal. This is why the otherwise wholly irrelevant focus of this demonstration — a local high school for science and math students — serves as well as any other public place. Such demonstrations have no need to address those with influence or power. They only need a captive audience on whom the demonstration’s message can be inflicted. The audience is not there to be persuaded, the audience exists only to serve the emotional needs of the demonstrators.

So a couple of sad kids ordered some signs from whichever abortion-protest retailer their family/church/home-school-network favors and they set up outside of the local STEM Academy at the beginning of the school day, intent on proclaiming their message to the gathering students, teachers, parents and bus-drivers.

Oh, and also, “Look at me! I’m better than Frederick Douglass times William Lloyd Garrison multiplied by Harriet Tubman!” Because in addition to the Holocaust-dismissing fantasy, these demonstrators also employ a slavery-dismissing fantasy, calling themselves “abolitionists.” 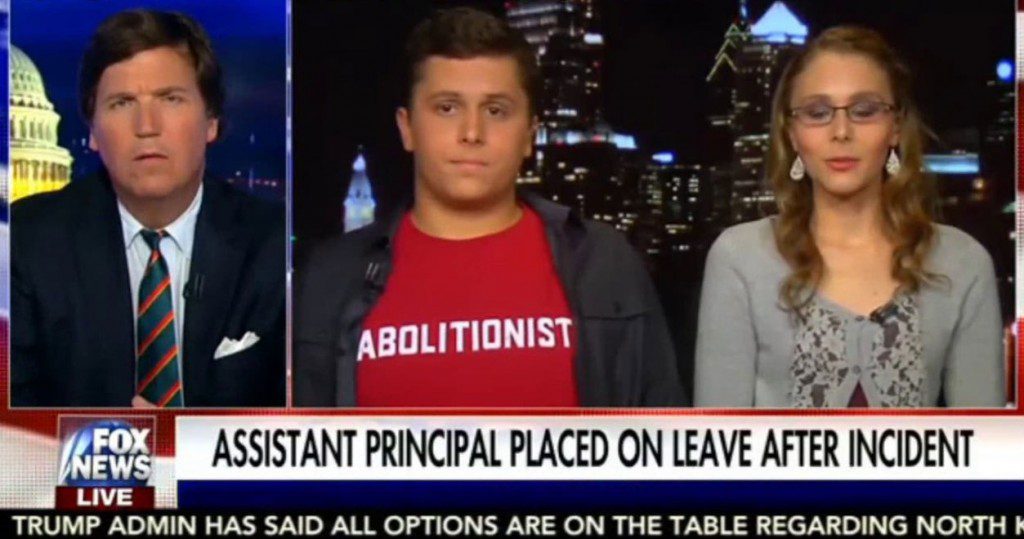 And it is the surest possible way of ensuring that you will never become any of those.

This demonstration was repugnant, ridiculous, and dishonest. It was, in a word, evil. (If you require some rule-based support for that, start with bearing false witness against neighbors while taking the Lord’s name in vain.)

I don’t blame the sad kids who have been brainwashed since birth to think that this kind of fantasy-role-playing blasphemy is expected of them. I blame their evil parents. And their evil church. And the publishers of whatever evil homeschooling curriculum they’ve been force-fed in lieu of an education.

And I blame the sign-peddlers and the PR professionals and the “religious liberty legal defense funds” set up to encourage this vile indecency and to profit off of it coming and going.

I also blame the media circus stuck in tired cut-and-paste, machine-pressed tropes that endlessly recycle stories like this without ever acknowledging the ugly lies and bad faith of such demonstrations.

The lazy thoughtlessness of such media accounts is reflected in the way that they all seem to refer to these play-acting children as “protesters.” Really? What, exactly, were they protesting? Chemistry class? Trigonometry? This was not a protest. It was a demonstration — the kids set out to demonstrate that America is Worse Than Nazi Germany and that they, and they alone, are Righteous.

The assistant principal who engaged these demonstrators disrupting the morning routine at his school at first attempted to converse with them, engaging them in rational, good-faith argument. He was met with only offensive slogans. Holocaust, Holocaust, Holocaust!

So, eventually, he lost his cool and told them to F–k off.

This has been repeatedly described by local officials and the right-wing media machine harvesting this local story as “inappropriate.” It was not.

Telling these kids to f–k off was entirely appropriate. And necessary. And civil.

And it will make you a magnet for people who are all of those things. Like these two kids and their parents and whatever church or cult or self-appointed “spiritual leader” put them up to this.

Is it really fair to call the kids themselves “con-artists”? They’re certainly perpetuating the con, but can we be sure they’re in on it? Perhaps they are its victims as well as its perpetrators. Perhaps the distinction there is one they themselves would be unable to make or to consider.

These kids have been taught and trained nothing but lies and self-serving fantasies. As a result, at this point they consist of nothing but lies and self-serving fantasies. That is the basis of their identity. When the rains come down and the floods come up, that sandy foundation won’t stand. One way or another, these kids are in for a world of pain and confusion.

If they have anything going for them, it’s that they’re currently driving 90 mph down a dead-end street. That’s an unsafe speed and they’re going to need really good brakes to avoid a horrific crash at the end. But at least, at this speed, they’re sure to arrive at that end — to be forced, sooner rather than later, to confront the fact that they’re going the wrong way, and that this road doesn’t take them anywhere.