Kelly J. Baker studied one of the darker corners of American history, writing Gospel According to the Klan: The KKK’s Appeal to Protestant America, 1915-1930. Baker wishes this was simply the esoteric specialty of a historian, but her topic of study remains disturbingly relevant today. She’s written about that continuing relevance in a Religion & Culture forum piece, “The Artifacts of White Supremacy.”

Baker’s essay explores the use and meaning of the American flag as a core symbol for the Ku Klux Klan. She includes numerous flowery tributes to Old Glory written by prominent Klansmen of the early 20th century. “We love Jesus because He shed his blood for us, and we love the Flag because it represents the blood shed for our freedom.” That’s from a 1926 article in the Klan newspaper the Kourier. It could just as easily have been from Robert Jeffress’ “Freedom Sunday” message in Dallas this week. 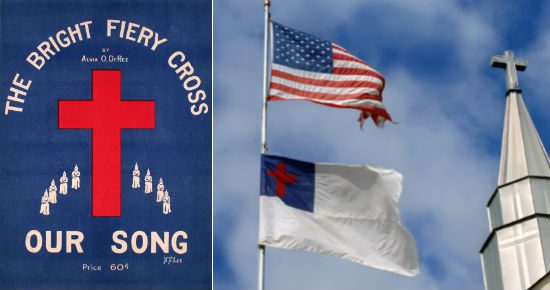 Religion & Culture just posted a supportive response to Baker’s essay, from religious historian Randall J. Stephens, “The Klan, White Christianity, and the Past and Present.” Stephens adds some fascinating, if depressing, detail about the mutual support and accommodation between the Klan of the 1920s and more “mainstream” white evangelical culture:

In the 1920s, America’s most famous crusading fundamentalist, Billy Sunday, made some efforts to keep his distance from the Klan. But Klansmen tended to see the revivalist as a kindred spirit. Without cozying up too much to the organization, Sunday found ways to praise the robed terrorists. Other traveling preachers like Bob Jones, Alma White, B. B. Crimm, Charlie Taylor, and Raymond T. Richey lauded the white supremacist groups in their sermons and publications. Billy Sunday’s ardent prohibitionism, biblical literalism, and nativism made him particularly attractive in the eyes of Klan members. In 1922 a South Bend, Indiana, newspaper cracked a bleak joke about their mutual affection. “Down in West Virginia the other day,” an editor noted, the Klan “slipped Billy Sunday the sum of $200. With Sunday’s O.K., that ought to put the K.K.K. in good standing with old St. Peter.” Sunday returned the favor with kind words about Klansmen who lent a hand in police vice raids. The revivalist would accept other larger-than-average donations from the Klan at revivals in Indiana, Tennessee, Mississippi, and Louisiana between 1922 and 1925. In Richmond, Indiana, Klansmen showed up to give him their donation decked out in all their full regalia. Fittingly, in 1923 a Klan-supporting editor in Texas rhapsodized: “I find the preachers of the Protestant faith almost solid for the Klan and its ideals, with here and there an isolated minister … who will line up with the Catholics in their fight on Protestantism, but that kind of preacher is persona non grata in most every congregation in Texas.”

Maybe Billy Sunday was so focused on his crusade against drink and “vice” that he was willing to accept support for it from anywhere. Maybe he just liked money. Maybe he thought it was possible to take that money or accept that support without fundamentally altering the “gospel” he was attempting to preach. But it wasn’t.

Stephens’ essay also includes the image on the left, above, of the sheet music for the Klan hymn “The Bright Fiery Cross,” which was sung to the tune of “The Old Rugged Cross,” and which was copyrighted by Homer Rodeheaver — the famous musical evangelist who toured with Sunday. I’ve placed it next to a picture of the “Christian flag,” because the resemblance was so striking.

There often seems to be an unspoken similar limit and qualification in the creepy, performative ritual of reciting the Pledge of Allegiance to the American flag. There’s the suggestion that its promise of “liberty and justice for all” doesn’t apply to 100 percent of Americans, but only to those who are 100-percent American — white, Protestant Christians.

June 28, 2017 The Scary Story racket is a two-part grift
Recent Comments
0 | Leave a Comment
Browse Our Archives
get the latest from
slacktivist
Sign up for our newsletter
POPULAR AT PATHEOS Progressive Christian
1