Left Behind and Trumpism

The Left Behind series sold more than 65 million copies. I can’t offer a precise Venn diagram comparing those 65 million readers with the just-under 63 million Americans who voted for Donald Trump, but I would imagine the overlap in the middle would be pretty big. Their appeal is the same, and so is the audience.

Here’s an example of that, and an illustration of how it works, from culture-warrior “pastor” Sam Rohrer, speaking on the Christian-brand TheDove TV network this week:

Sam Rohrer of the American Pastors Network asserted that people who oppose President Trump’s plans to restrict immigration are attacking God and are on the side of the Antichrist.

“Who is it that’s pushing for open borders?” Rohrer asked. “It’s globalists, it’s the one-world government out of which will come the Antichrist.”

“The concept of borders and nations and languages are God’s ideas,” he continued. “God, in Acts, says He laid out the nations before the foundation of the world. He actually had defined the geographical boundaries of the nations; God laid that out. So when there is an attack on boundaries, borders, language, immigration, when there is a denial of those things, it is an attack on God himself. And ultimately, we know that Antichrist view is what is leading up to the challenge we now have.”

Rohrer said that globalists and Islamists are “wanting to dislodge God’s plan for the nations” through open borders and “anybody who agrees with that plan is in stark agreement with the Antichrist way of living and thinking and they are in opposition, directly, to the Bible and to Christ himself.”

This is how people like Rohrer “read” the Bible — by reading Left Behind instead. What does the Bible have to say about immigrants, refugees, aliens and exiles? Well, for Rohrer, the Most Important Thing is to remember that “the Bible teaches” us about the coming Antichrist who will soon — at any moment! — rise to usher in a One World Government. The Antichrist will do this by deceiving the world with talk of peace.

Therefore, anyone who talks of peace is paving the way for the Antichrist. Anyone who seeks to reduce conflicts between nations is “in stark agreement with the Antichrist way of living and thinking.”

This seems to be the only way these Christians can imagine learning what Jesus had to say or to teach about anything — by reverse-engineering the opposite of what they imagine the Antichrist will do.

Left Behind shaped the political imagination of its readers in many ways — including the most deliberate, which involved Tim LaHaye injecting the series with big doses of his own John Birch Society views. But the series’ weird, warped theology can be discerned in much of America’s similarly weird and warped political landscape — including the Trumpian and Trumpite defense of the white supremacists, white nationalists and Nazis who marched this weekend in Charlottesville, Va. 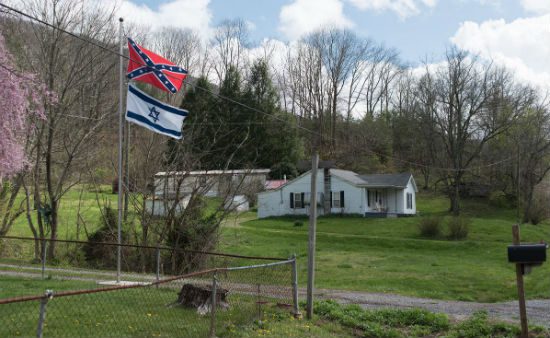 “Kind of wondering what is going on in this house right now,” he wrote of this photo, taken last year in West Virginia.

My guess is that they’re reading Left Behind and watching John Hagee DVDs. That would account for the odd sight of a Confederate battle flag flying along with the flag of Israel.

Yes, that seems like a contradiction — the flag celebrating the “heritage” of treason in defense of slavery is, after all, a favorite symbol for white supremacists and white nationalists who want American citizenship restricted to white “Christians.” Those rallying around that flag tend to be intersectional — wanting to disenfranchise or deport or eradicate both African-Americans and Jews (among many others). So you might not expect them to also be flying a symbol of Jewish pride.

But many of those same Confederate-flag-waving white nationalists also subscribe to Tim LaHaye’s brand of Christian apocalypticism. That makes them enthusiastically “pro-Israel.” This doesn’t entail support or affection for the children of Israel — for Jewish people as a whole — only for the political nation-state itself. They believe that supporting and allying with that political state puts them on the right side in the coming war with the Antichrist at Armageddon, after which all Jews will be forced to denounce their Jewishness and convert to Christianity or else they will be slaughtered, en masse, and condemned to Hell as Christ-rejecting sinners.

The apocalyptic Zionism of these Rapture-Christians has added appeal for Bircher types like LaHaye and many of his fans. They’re “pro-Israel,” in part, because they don’t want to live with Jewish neighbors here. It’s a not-so-subtle variation of the hateful “Go back to Africa!” impulse they have toward black Americans.

So while those two flags may seem contradictory, for the Left Behind & Trump fans flying them, they’re both variations of the same assertion: “stark disagreement with the Antichrist way of living and thinking.” And that, they imagine, must put them squarely in sync with the Antichrist’s opposite, the Christ whose own words they have never otherwise read, heeded, or understood.