It’s tempting to think of “sin” as only the way it’s often depicted in cartoons. You’ve seen that bit — with the little devil on one shoulder and the little angel on the other, each trying to persuade a person to do right or wrong. It’s a particular moment, a fork in the road, a discrete choice that must be made. It’s conscious, voluntary and deliberate. 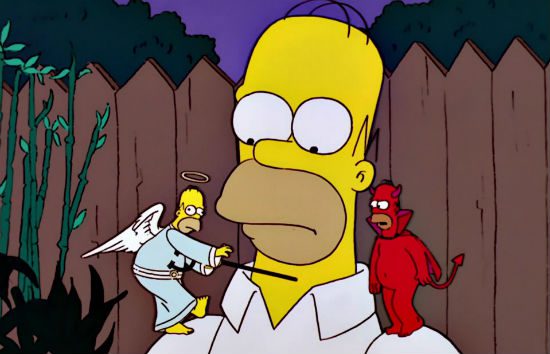 This is familiar. It’s something that most of us have experienced at one point or another. It’s a real thing that sometimes happens.

And so, yes, this is part of what we sometimes mean when we talk about “sin.” But it’s not the only part, or the largest part, or the most important part.

Most of the time, this isn’t how sin works at all. Sometimes we’re presented with this kind of binary choice between right and wrong — the opportunity or temptation to commit a sin. This is the stuff of stories and plays — moral dilemmas and such. But “sin” is usually not quite so distinct. That’s why the Apostle Paul doesn’t talk about sin as something we do nearly as much as he does about sin as something we’re in.

Think of the Seven Deadly Sins. We can exhibit or express these sins through particular deeds, but they are not particular deeds in and of themselves. Those sinful deeds we commit are things we do when we are in these sins — when we are caught up in and subject to lust, gluttony, greed, sloth, wrath, envy and pride. Those prideful or lustful or wrathful actions may not involve violating any specific commandments, but they are sins nonetheless.

That’s the other way we tend to miss the bigger picture, of course — by thinking of “sin” only as a matter of breaking specific rules or commandments. Thus when we condemn something as a sin, we imagine that we’re adding a new rule to the list.

This, I think, is part why we remain confused despite the apparent clarity of a statement like “Racism is sin.” We imagine we’re adding a new rule to our ever-growing list of sinful, forbidden deeds — something like “Thou shalt not racism.”

OK, then, we think, we’ll try not to do that. And we prepare ourselves for the possibility that at some point we’ll be confronted with a stark, conscious, volitional choice between sin and not-sin, complete with a little devil on one shoulder whispering “Go ahead, commit racism” and a little angel on the other shoulder saying, “No, don’t, just keep on not committing racism.” And so we imagine that as long as we don’t consciously make that wrong choice and decide to start racisming, we’ll be innocent and free of this sin.

But, again, this is not what “sin” usually means or how it works. It’s not something we can be innocently free of barring some specific, wholly conscious choice. It’s something we need to be freed from because we’re in it. When we think of sin only as something we choose to do, then we start to think of innocence as our default setting — the blessed state in which we live until and unless we consciously choose to break the rules by committing a sinful act.

This is backwards. Our default setting is not a state of innocent freedom but one of unconscious servitude. Sin isn’t something we have to choose, we’re already in it. This is a big chunk of Paul’s argument in the book of Romans. That’s profound, insightful stuff, but it’s also fiercely sectarian and theological, and theological arguments don’t tend to be persuasive outside of the small communities that share very particular theological perspectives.

So, OK then — set aside Romans and Paul and all of this religio-speak of “sin” and “sinfulness.” What we’re really talking about here is “How to keep from going through your comfortable, prosperous, respectable adult life dead, unconscious, a slave to your head and to your natural default-setting of being uniquely, completely, imperially alone, day in and day out.”

That’s from David Foster Wallace’s 2005 commencement address at Kenyon College, better known as “This Is Water.” A lot of that speech sounds a lot like something from Romans. He even does that Paul-ish thing where he keeps telling you what he’s not telling you, ticking through lists of unsatisfying alternatives before presenting what he sees as the correct answer:

If you worship money and things — if they are where you tap real meaning in life — then you will never have enough. Never feel you have enough. It’s the truth. Worship your own body and beauty and sexual allure and you will always feel ugly, and when time and age start showing, you will die a million deaths before they finally plant you. … Worship power — you will feel weak and afraid, and you will need ever more power over others to keep the fear at bay. Worship your intellect, being seen as smart — you will end up feeling stupid, a fraud, always on the verge of being found out. And so on.

Look, the insidious thing about these forms of worship is not that they’re evil or sinful; it is that they are unconscious. They are default-settings. They’re the kind of worship you just gradually slip into, day after day, getting more and more selective about what you see and how you measure value without ever being fully aware that that’s what you’re doing. And the world will not discourage you from operating on your default-settings, because the world of men and money and power hums along quite nicely on the fuel of fear and contempt and frustration and craving and the worship of self.

That is what we’re talking about when we talk about sin. Once we come to understand that, then we can begin to understand what it means to say that “Racism is sin.”