Roy Moore is Even Worse than You Thought

Roy Moore was removed from his (elected) post as chief justice of the Alabama Supreme Court for refusing to comply with the law. Twice. The second time resulted in a lifetime suspension.

Moore is a birther. He says homosexuality is an evil “crime against nature” that is “inherently detrimental to children” and  says judges who have defended the constitutional right of marriage equality should be impeached. Marriage equality, Moore says, will result in the government taking away your children. He hangs out with the kind of far-right Christianists who call for stoning LGBT people. He has cozy, lucrative ties to Neo-Confederate white nationalists. He’s terrified of “Sharia law,” even if he doesn’t know what it is, and he’s sure they have it in, like, Illinois or somewhere like that. He wants religious tests allowing only Christians to serve in Congress. He thinks “Christians” (meaning fundamentalist white nationalists like himself) should pull their children out of public schools. He claims that undocumented immigrants have more rights than white citizens, who he imagines are a persecuted class.

And all the while Roy Moore has been running a charity that does little more than pay himself and his family members six-figure salaries for no-show jobs.

He’s a grifter with a bad case of the shut-eye — a snake-oil salesman who drinks a full case of his own bogus formula every day. 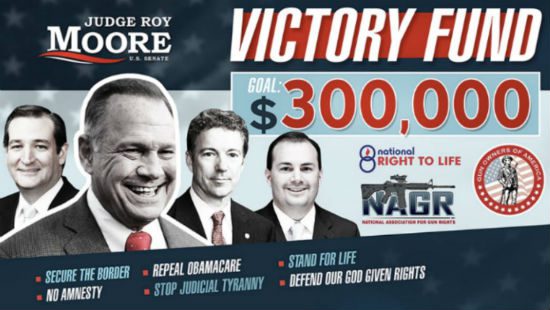 But today we learned that Roy Moore is even worse than we thought.

He has always seemed like a caricature of some Southern Gothic monster — some bastard creation pieced together out of left-overs from Tennessee Williams and Flannery O’Connor and maybe a pinch of Carl Hiassen. Now we can also add this: “Woman says Roy Moore initiated sexual encounter when she was 14, he was 32.”

That Washington Post report actually cites four women accosted or molested by Moore when he was much older than them (one was 19, the others were minors). Their testimony is credible, detailed, and immensely disturbing.

To their credit, some Republican senators have condemned Moore and withdrawn their support:

“If these allegations are true, he must step aside,” Senate Majority Leader Mitch McConnell said in a statement. A string of other Republican officeholders, including Cory Gardner, who leads the GOP’s Senate campaign, made similar statements. The Atlantic reached out to all 52 Republican senators to ask whether they think Moore should withdraw from the Alabama Senate race, based on the allegations. Eighteen senators responded, all suggesting that if the The Washington Post allegations are true, Moore should withdraw from the race.

That’s 18 out of 52 — leaving 34 GOP senators who remain quietly on the record as supporting Moore. The old grifter remains defiant and insists he’s staying in the race:

Moore, who made his name as a crusading moral and religious conservative, denied the allegations. A campaign statement said, “This garbage is the very definition of fake news and intentional defamation.” Moore tried to undercut the story by leaking the accusations to Breitbart News, a sympathetic outlet, ahead of the Post story.

Breitbart is, of course, sticking by their man. White nationalists with a history of preying on children is very much on-brand for Breitbart.

Roy Moore has already sent out fundraisers based on the Post revelations. Yes, he’s fundraising off of reports that he molested three underage girls. For Moore and for his longtime supporters, this is just further evidence that real, true Christians like Moore are suffering persecution at the hands of the evil liberal media.

I honestly don’t know how this will play with the white Republicans who have made Alabama the reddest of red states. Those folks are well-practiced at overlooking corruption, lawlessness, and moral horrors from party leaders in their state. And Alabama party leaders remain lockstep in support of Roy Moore:

…  “I think it’s just a bunch of bull,” Perry Hooper Jr., President Trump’s Alabama state chairman, told TPM. “Mitch McConnell should know better to make a statement like he made unless he gets all the answers. We’re right in the political zone right now, the election’s December 12th. This is the same campaign issue the left ran against Donald Trump on, they’re doing the same thing against Roy Moore.”

Hooper … called the allegations “ludicrous” and “gutter politics” unless they could be proven.

“The same thing went on when President Trump ran for office, there was about 15 ladies who ran to the press and said the same thing,” he said.

There has been no shortage of Alabama Republicans lining up to say such things today:

Asked about the allegations by the Washington Examiner, Alabama State Auditor Jim Ziegler said Moore is “clean as a hound’s tooth,” turned to the Bible.

“Take the Bible. Zachariah and Elizabeth for instance. Zachariah was extremely old to marry Elizabeth and they became the parents of John the Baptist,” Ziegler said. “Also take Joseph and Mary. Mary was a teenager and Joseph was an adult carpenter. They became parents of Jesus.”

Ziegler added that there was “nothing immoral or illegal” about what the four women and nearly 30 other sources told the Post.

Alabama Mobile County GOP chairman John Skipper: “It does not really surprise me. I think it is a typical Democratic – Democrat – ploy to discredit Judge Moore, a sincere, honest, trustworthy individual.”

I told him the 14-year-old became a Trump voter.

“That’s the typical background or profile of somebody they would be using for that,” he said.

“If they said she was a Hillary supporter, then she’d be more dismissed by the local voters here in the state of Alabama. You’d have to paint her as a Trump supporter to be of any credibility,” … Blocker says.

Dale tallies the results of his attempted survey: “4 vehemently pro-Moore, 3 no comment/’haven’t read the story yet,’ 15 I couldn’t reach, 0 criticism of Moore.”

It will be interesting to see which way the prevailing wind is blowing by the time Dale succeeds in reaching those other 15 GOP county chairs. I’d like to think they’ll quickly come to see that defending an alleged child molester in order to justify voting for white nationalism really isn’t a good look. But we’ll see. Meanwhile, other reporters have begun poring over Moore’s squicky history as a judge, including his dubious record of downplaying accusations against sexual predators targeting children.

Will any of that matter when Alabama voters go to the polls next month to choose their next senator? I have my doubts. Here’s another nugget from Daniel Dale:

After a long pause, Alabama Bibb County Republican chairman Jerry Pow tells me he’d vote for Roy Moore even if Moore did commit a sex crime against a girl. “I would vote for Judge Moore because I wouldn’t want to vote for Doug,” he says.

“Doug,” you see, is Doug Jones — Moore’s opponent in that senate race, who is not just a Democrat, but also the man who prosecuted the klansmen responsible for the 1963 bombing of the 16th Street Baptist Church in Birmingham. Doug Jones sided with those four little black girls rather than siding with the defense of white hegemony in Alabama.

For Republicans in the Year of Our Trump 2017, that makes him worse than a child molester.

November 10, 2017 LBCF, No. 159: 'Buck and the preacher'
Recent Comments
0 | Leave a Comment
"What if the pill was also a ‮renob‬‎ pill? That'd put them in a spot."
Nomad 7/1 Flashback: Health class
"It is Disability Pride Month, my fellow cripples and so forth. This photo series is ..."
Jenny Islander 7/1 Flashback: Health class
"Over the hood, yes, there's poor visibility in all our current grossly oversized pickups, but ..."
Nomad Smart people saying smart things (6.30.22)
"Tens of millions were thinking it, is what you're saying?"
Thomas Moll 7/1 Flashback: Health class
Browse Our Archives
Related posts from slacktivist